‘The disaster against Barca opens up a crisis with far-reaching consequences at every level of the club.’ 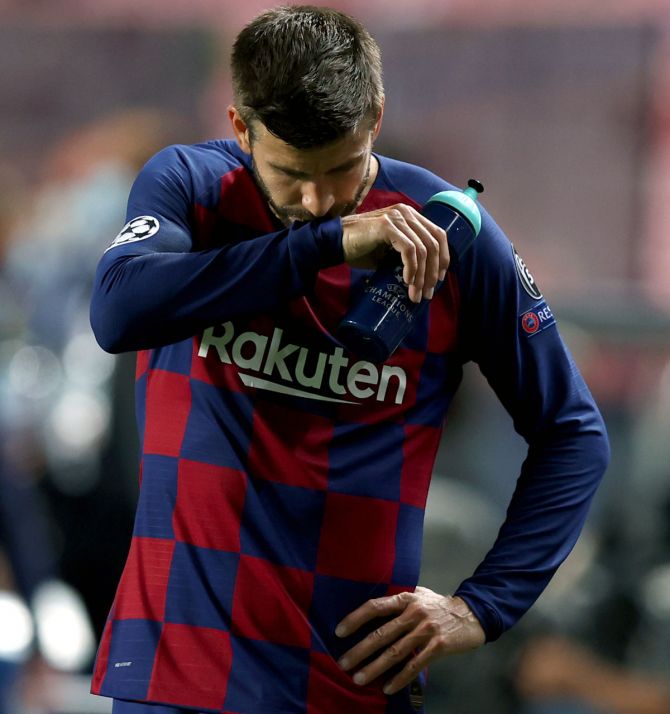 The Spanish media showed no mercy to Barcelona after their epic 8-2 defeat by Bayern Munich in the Champions League quarter-finals, calling for huge changes at the club after a night that will be difficult to erase from their memory.

‘Historic humiliation’, cried the cover of Barcelona-based newspaper Sport, adding: ‘A ridiculous Barca suffered its biggest defeat in Europe, ending a lamentable season without a trophy for the first time in 12 years.’

Daily Mundo Deportivo described the defeat on its cover as ‘A shameful end to an era’, also declaring that coach Quique Setien would be immediately sacked as coach and that president Josep Maria Bartomeu would call an election imminently.

National newspaper AS used the same headline as Sport, adding: ‘The disaster against Barca opens up a crisis with far-reaching consequences at every level of the club.’

Marca used the word ‘shame’ on its cover, adding that Setien, who was hired in January to try and restore some style and flair to the team, had ‘one foot and a half out of the door’.

Sport gave defender Nelson Semedo a rating of one out of 10 after he was tormented by Alphonso Davies in the build-up to the fifth goal scored by Joshua Kimmich. It gave Setien a rating of zero, adding: ‘He cannot spend one more day in Barca’s dugout.’

AS also said Setien’s days at the club were numbered, adding that former Tottenham Hotspur coach Mauricio Pochettino was waiting in the wings, despite previously saying he would never coach Barca due to his loyalty to former club Espanyol.