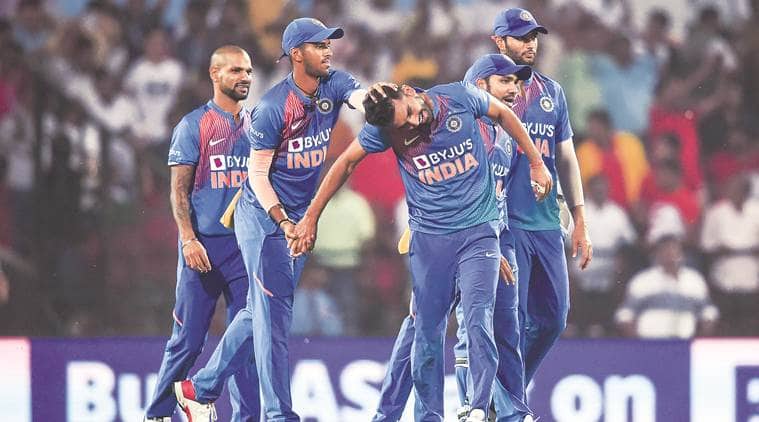 Deepak Chahar had not done too much to catch the eye when Chennai Super Kings picked him at the 2018 IPL auction. On paper, the medium pacer had all the attributes to prosper in the game’s shortest format. However, a series of intermittent injuries had cluttered his mind and dampened his spirit. He had a fairly middling debut season for Chennai — 10 wickets from 12 matches at an average of 27.80. However, captain MS Dhoni and coach Stephen Fleming helped him find his verve and also rekindle his passion for the game. The likes of Dwayne Bravo, Lungi Nigidi and bowling coach Andrew Bichel also played crucial roles in helping Chahar hone his skills further. This was backed by a regimented fitness routine. He was no longer dependent only on swing to outwit batsmen. He began to touch 140kmph mark regularly and even expanded his repertoire by adding deceptive cutters and a knuckle ball.

Chahar finally began to taste success the following season, when he turned into one of Dhoni’s foremost weapons. Chennai may not have won the 2019 IPL title, but Chahar enhanced his reputation by consistently removing top-order batsmen, which ended in him scalping 22 wickets from 17 matches at an impressive average of 21.90. The breakthrough IPL season also saw Chahar bowling according to the match situation and exploit batsmen’s weaknesses. 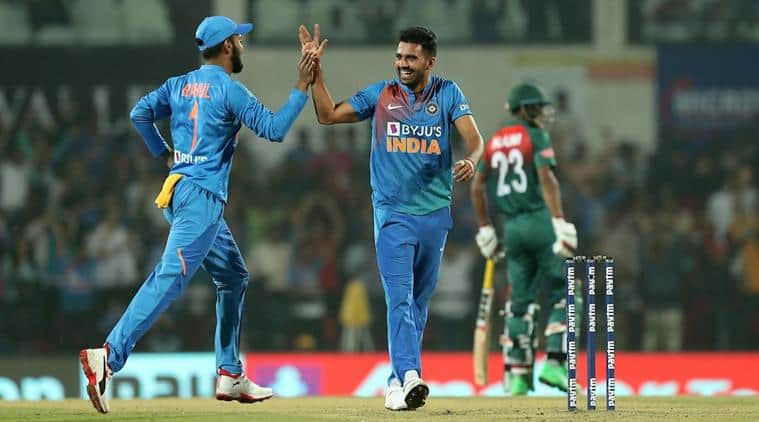 This was evident against Bangladesh in Nagpur, where the 27-year-old returned scarcely-believable figures of 6/7 in 3.2 overs — the best ever by a bowler in T20Is — and finished the match with a hat-trick. His efforts were largely instrumental in India romping home to a eventually comfortable 30-run win and seal the three-match series 2-1.

It was a match in which Rohit Sharma’s team effectively went in a bowler short — having replaced all-rounder Krunal Pandya with Manish Pandey. Despite the best efforts from India’s batsmen — they finished at 174/5 batting first — there was a worry that Bangladesh’s effective middle order could exploit the situation.

However, Chahar continuously punched holes in the visitors’ plans. First up, he removed Liton Das and Soumya Sarkar off consecutive deliveries to derail the chase, and just when a 98-run third-wicket stand between young opener Mohammad Naim and Mohammad Mithun was turning into a match-winning one, Sharma brought back his main strike bowler.

Chahar did not disappoint his captain; he dismissed Mithun with a devious slower delivery that swerved and forced a mistimed stroke. At this stage, Chahar’s figures read 2-0-3-3. He was then summoned towards the fag end of the innings to mop up Bangladesh’s tail.

Last week, BCCI posted a video on Twitter that showed KL Rahul and Shreyas Iyer participating in a fitness challenge organised by the team’s strength and conditioning coach Nick Webber. The batsmen were entrusted with an arduous task — make as many waves as possible on parallel ropes under 30 seconds. Iyer won the challenge, having performed 50 waves in the stipulated time as compared to Rahul’s 45.

Cut to Sunday evening and the duo continued to make waves, this time on the cricket field. When Iyer joined Rahul, India were in a spot of bother at 35/2 in the sixth over. They had already lost their irrepressible captain and Shikhar Dhawan cheaply.

Quite often in the past, India’s top 3 comprising Sharma, Dhawan and Virat Kohli have scored the bulk of the team’s runs, leaving precious little for the middle order. But on Sunday, the stage was set up perfectly for Rahul and Iyer. Through a mixture of sumptuous stroke-play and deft running, they gave the innings the requisite momentum.

Rahul, in particular, was batting like a dream, piercing the off-side field with ridiculous ease. Iyer, on the other hand, survived a chance early on when Aminul Islam Biplob dropped him even before he had opened his account.

Iyer rode his luck and marched on. When the two were at the crease, no score looked inconceivable. Their alliance yielded 59 runs in a shade under seven overs. Inexplicably though, just when Rahul had looked impregnable, he holed out to Liton Das at long-off for a sublime 35-ball 52. The Karnataka batsman kicked the turf in disgust as he walked off. A feather-bed track on offer and with an insipid Bangladesh bowling attack, a three-figure score was there for the taking.

Rahul’s departure did little to hamper Iyer’s belligerence. He tore into off-spinner Afif Hossain for three consecutive sixes to race to his maiden T20I half-century. In doing so, the Mumbaikar also gave India the desired thrust in the middle overs. When he departed for a whirlwind 33-ball 62, India had comfortably set their sights on a score in excess of 170.

Splendid hands from Rahul and Iyer would only add to the selectors’ dilemma when captain Kohli returns to the fold. Through this knock, Iyer only reaffirmed his credentials as a power-hitter in the middle order — someone who has the ability to back the efforts of either Sharma and Kohli — or as he displayed tonight, could also act as the pivot and set match-winning targets.

Case filed against Chennithala, 19 others

Scheduled Caste man assaulted by gang
We and our partners use cookies on this site to improve our service, perform analytics, personalize advertising, measure advertising performance, and remember website preferences.Ok