Nandhaur’s heritage, both natural and built, is one of wild Uttarakhand’s best-kept secrets.

Going up the Nandhour and fishing as we went — our best day’s catch on light trout rods was a hundred and twenty fish — we arrived on the fifth day at Durga Pepal,” wrote hunter-naturalist writer Jim Corbett, while trailing the Thak man-eater in the dense forests of Haldwani division, not very far from the Indo-Nepal border. Eighty years later, a bone-shattering six-hour drive through the most treacherous kuccha forest roads I have ever been on brought me to the spot where Corbett and his friend Sir William Ibbotson, Nainital’s district commissioner, stood in 1938 — the quaint Durgapeepal forest rest house (FRH). It was dark when we arrived, a thick layer of fog had enveloped the small triangular valley around Nandhaur river, which wound its way through the hills.

My journey had begun from the Chorgalia FRH, incidentally the same starting point as Corbett’s and Ibbotson’s on their hunt for the Thak man-eater. Incredibly enough, I even found a faded ink entry made by Ibbotson in 1938, as he waited for Corbett to join him, in the remarkably preserved old register at Chorgalia, dating back to 1933. This was my second visit to Nandhaur, the 270 sq km wildlife sanctuary carved out of the heart of the Nandhaur valley in 2012. The valley is nearly 1,000 sq km of prime forest, drained by the Nandhaur and Ladhya rivers, with the mighty Sarda river at the eastern end and the Gaula on the west, straddling across the districts of Nainital, Champawat and Rudrapur.

My first stop was the beautiful 1923 FRH at Jaulasal, atop a small hillock, overlooking the Kolaria stream at its base and the series of rolling hills beyond it. Oriental pied hornbills, their graceful majestic flight contrasting their raucous calls, would settle on the fig tree next to the bungalow every evening. Distant voices — of children playing games and Gujjars guiding their cattle — from the nearby tiny Jaulasal khatta (forest village), the birdsongs of myriad winged guests fluttering around the rest house, and the soothing gurgling sound of the Kolaria provided company by the day. Nights, though, were silent, except for the crackling of burning embers from the fireplace and the occasional alarm call of a barking deer, piercing the valley.

Jaulasal had been my base during my first trip, too, and I doubt if there could be a more scenic rest house in the region. However, as I stood gazing at the Durgapeepal FRH, built in 1928 in the exact same design as Jaulasal, except for two chimneys, and the breathtaking views it offered, I had to admit that this younger sibling of Jaulasal overshadowed the latter with its charm and location. Standing upon a small hillock, with a commanding front view of the Nandhaur river emerging from the hills and bringing with it bone-chilling cold winds, and, a stunning rear view of the river meandering through wide riverine grasslands, I realised Durgapeepal was nothing like anything I had seen before. 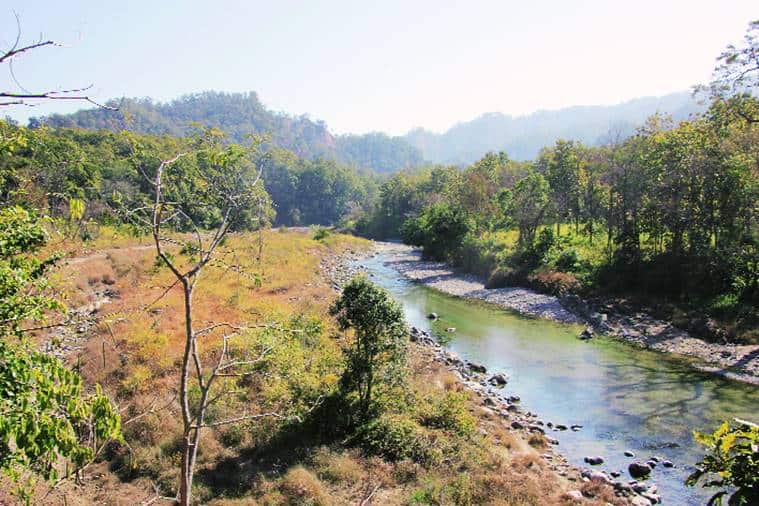 However, what elated me the most was the fact that Durgapeepal is, perhaps, among the last few FRHs not to have undergone a “renovation”, a malaise that has swept through the forest bureaucracy over the past two decades, ruining the aesthetic of these heritage structures. The bungalow’s floor had not been sacrilegiously tiled with shiny smooth white tiles, nor had its walls, windows, doors, fireplaces and bathrooms been “refurbished” in a bid to make them look “modern”. Durgapeepal still looked, and felt, the same as it would have to Corbett and Ibbotson.

Durgapeepal was saved from these desecrations mostly because the perilous forest roads leading up to it remain unmotorable during monsoons and thereafter, thus cutting it off from the division headquarters for nearly eight months of a year. Hence, few high-ranking officials make it here.

The bungalow floors were still cement, the interior walls still slightly uneven owing to years of chuna and surkhi coating, the bathrooms still had that now-almost-extinct peculiar colonial-era feature of a small partition wall separating the toilet from the bathing area. Quite a bit of the British-era furniture has survived, from side tables to the distinct FRH-style study-cum-dressing tables with a mirror at the centre. The stairway leading to an old water tank atop the rest house harked back to a time when it had to be manually filled with buckets for visiting sahibs. The colonial-era beds, or masehris — in all likelihood, the same on which Corbett and Ibbotson slept — still survived, though recently transferred to the guard quarters. It would be tragic if Durgapeepal FRH were to be “modernised”. Rather, this bungalow could be preserved (and popularised) the way it is, as a “Heritage Rest House”, an ideal site for studying the quintessential Indian forest rest house with all its original architectural features intact.

About 12 km away is the Aaonlakheda FRH, built in 1906 and recently resurrected after lying abandoned for over a decade. Equally isolated and stunning, it, too, rests on a small hillock, with the Nandhaur flowing past on two sides, forming turquoise pools, the favourite haunt of the mahseer fish, which have made a comeback in recent years. The blue-ish white tiles of the bathroom floors was the only alteration to the original structure. Unfortunately, the decade of abandonment had resulted in the loss of all the old furniture and rest-house registers.

The Aaonlakheda chowki, next to the FRH, constructed in 1887, is among the oldest departmental structures in Haldwani division (called Kumaon division back then). This chowki had a bunker-like underground room, accessible via a small trapdoor on the chowki’s wooden floor, the shelter itself fortified on all sides by a thick rocky wall except for a small arch-shaped entrance that leads to the outside. I had never seen, or heard of, something like this before. It piqued my curiosity. On enquiring, the staff replied — “haathi!” Back in the day, elephants would often raid the place. To save themselves, the staff would huddle into the basement and wait for the herd to leave. There used to be a large iron door that closed the arched entrance. However, this basement has now fallen into disuse ever since walls and trenches were constructed around the campus, informed forest guard Paan Singh, who survived a nearly-fatal bear attack a few years ago.

Wildlife has bounced back across the Nandhaur over the last few years. In Jaulasal, Durgapeepal, Aaonlakheda, walk for a few hundred metres and you will come across tiger or leopard tracks. The herbivores are recovering, too, after a period of decline. We sighted more than half-a-dozen barking deer, cheetals, 15-odd sambars, including a group of three casually licking minerals off hill slopes, in front of the Durgapeepal FRH. The highlight, though, was the sight of a huge male leopard, not very far from Durgapeepal, while we were returning from Aaonlakheda.

However, it was the beauty of this landscape that left me overwhelmed. Every few metres revealed a postcard-worthy panorama. Blissfully far from the maddening crowds of Corbett and its gazillion (mostly grotesque) resorts, Nandhaur’s heritage, both natural and built, is indeed one of wild Uttarakhand’s best-kept secrets.