Archaeologists have uncovered a number of still life scenes, including depictions of animals, which are believed to have been on the menu — like mallard ducks and a rooster 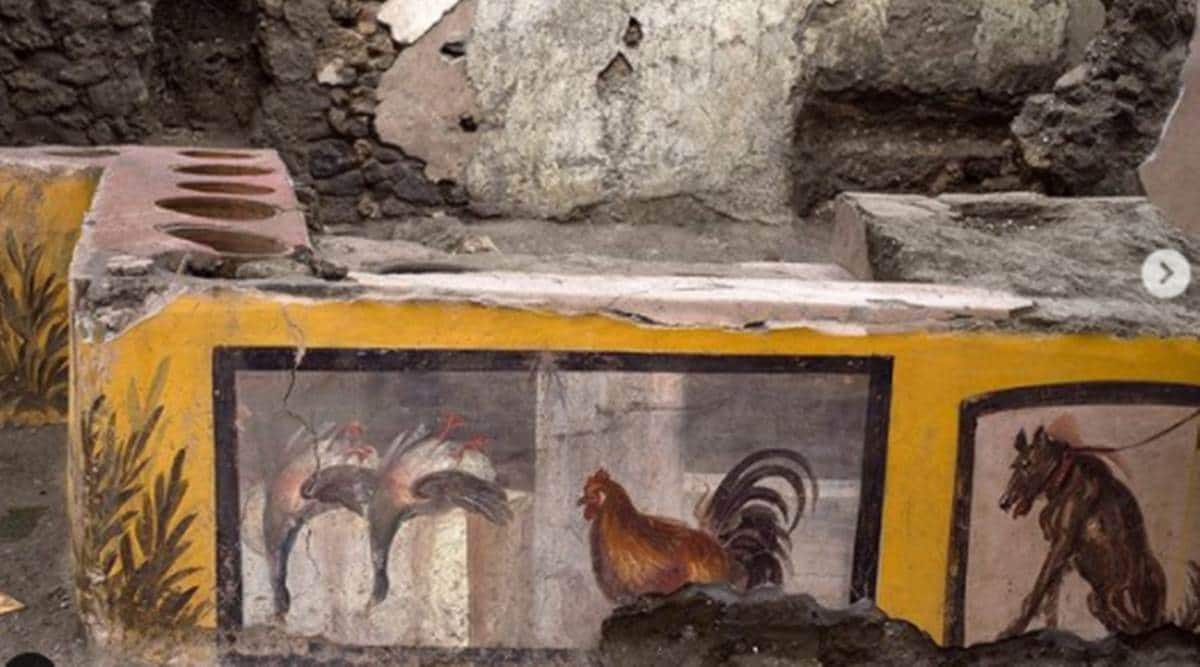 A perfectly preserved and frescoed thermopolium, which is a Roman-era fast-food stall, has been discovered in Pompeii — a vast archaeological site in southern Italy’s Campania region. According to a report in The Guardian, researchers unearthed the counter Saturday, “in an exceptional state of preservation”.

The snack bar appears decorated with “polychrome patterns and frozen by volcanic ash”. It was partially exhumed last year, but the team of archaeologists extended work on the site to reveal it in its full glory, the outlet mentions.

It is known that Pompeii was once buried in ash when the nearby Mount Vesuvius erupted in 79 AD, killing many of its residents — between 2,000 and 15,000 people — making it a ghost town. But archaeologists have, over the years, continued to make discoveries here.

The Guardian report further states that the Thermopolium of Regio V — exhumed at what used to be busy intersection of Silver Wedding Street and Alley of Balconies — was the Roman-era equivalent of a fast-food snack stall.

In its current stage, archaeologists have uncovered a number of still life scenes, including depictions of animals, which are believed to have been on the menu — like mallard ducks and a rooster — perhaps to be served with wine or hot beverages.

Sharing a few pictures on his Instagram account, Massimo Osanna, the Director General of National Museums at the Ministry of Cultural Heritage and Activities, and Director of Pompeii, wrote: “The first analyses confirm that the paintings on the counter depict, at least in part, the foodstuffs and drinks which were actually sold inside the Thermopolium. The paintings on the counter include two mallard ducks, and indeed a fragment of duck bone was in fact found inside one of the containers, alongside swine, goats, fish and land snails, indicating the great variety of products of animal origin used in the preparation of the dishes. (sic)”

Amphorae, a water tower and a fountain, were also found along with human remains, including those of a man believed to have been about 50 and discovered near a child’s bed, the report states. “The counter seems to have been closed in a hurry and abandoned by its owners but it is possible that someone, perhaps the oldest man, stayed behind and perished during the first phase of the eruption,” Osanna was quoted as telling Ansa news agency.