Sharif flew back to Pakistan in an attempt to galvanise his Pakistan Muslim League party before elections on July 25 on the day at least 133 people, including a top nationalist leader, were killed in a powerful suicide blast and a targeted attack on separate election rallies in Pakistan.

Just days before general elections in Pakistan, former Prime Minister Nawaz Sharif and his daughter Maryam were arrested late Friday after returning to the country following their conviction in one of three corruption cases.

Sharif flew back to Pakistan in an attempt to galvanise his Pakistan Muslim League party before elections on July 25 on the day at least 133 people, including a top nationalist leader, were killed in a powerful suicide blast and a targeted attack on separate election rallies in Pakistan.

The plane carrying Sharif and Maryam landed at Lahore’s Allama Iqbal Airport at around 9 pm, nearly three hours late. According to an airport official, they surrendered before a team of the country’s anti-graft body — the National Accountability Bureau — without any resistance. Federal Investigation Agency (FIA) officials took their passports for immigration.

According to media reports, dozens of security officials entered the plane after it landed and asked other passengers to leave. Their passports were seized by a three-member FIA team, and both were permitted to meet Begum Shamim Akhtar, Sharif’s mother, in the Haj Lounge before they were sent on a special private plane bound for Islamabad International Airport. READ | Why Nawaz Sharif may find it hard to bounce back Earlier in the day, police clamped down across Lahore, arresting scores of Sharif’s Pakistan Muslim League party workers to prevent them from greeting him at the airport. The Punjab government had also suspended mobile and internet services in Lahore.

In a video message, tweeted by 44-year-old Maryam, the former PM urged his followers to stand with him and “change the fate of the country”. She also posted pictures of their visit to the hospital to see her ailing mother Kulsoom, who is critically ill and undergoing cancer treatment.

“The country is at a critical juncture right now. I have done what I could. I am aware that I have been sentenced to 10 years (in prison) and I will be taken to a jail cell straight away. But I want Pakistani nationals to know that I am doing this for you,” he said in the video.

Their return to Pakistan to face a prison sentence is perceived as a high-stakes gamble to galvanise their beleaguered party ahead of the July 25 election. Sharif hopes to shake up an election race marred by accusations that Pakistan’s powerful military is working behind the scenes to skew the contest in favour of ex-cricket hero Imran Khan, who has described Sharif as a “criminal” who deserves no support. 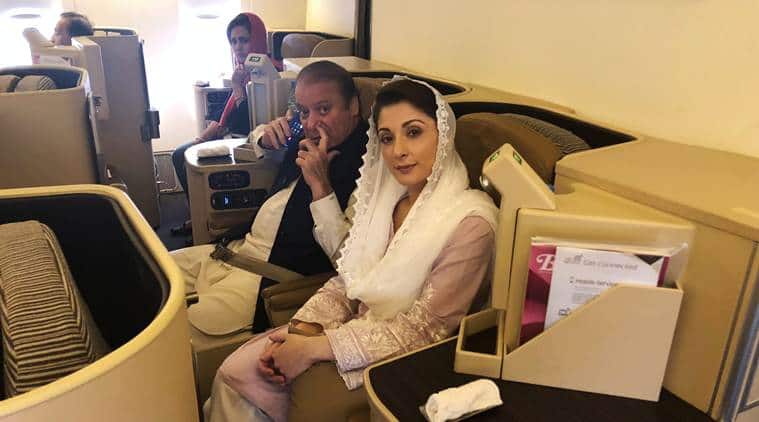 Speaking to the BBC at the Abu Dhabi airport as he waited to change planes, Sharif said: “What credibility will these elections have when the government is taking such drastic action against our people and this crackdown is taking place all over the country?”

Sharif and Maryam were convicted on July 6 in the Evenfield properties case linked to the Sharif family’s ownership of four luxury flats in London. Sharif and Maryam were sentenced to 10 and seven years in prison. The family also faces two more corruption cases in the accountability court – Al-Azizia Steel Mills and Flagship Investments – in which they are accused of money laundering, tax evasion and hiding offshore assets.

Sharif’s PML-N party, led by its president and Sharif’s younger brother Shahbaz, Friday also managed to take out a rally despite the imposition of Section 144 which bars the assembly of more than five people.

The rally kicked off at the Lohari Gate in the afternoon and managed to proceed but a few km as party workers struggled to remove cargo containers in the way. Near the airport, Sharif’s supporters clashed with police which otherwise did not stop them from removing containers. “It appears the Punjab caretaker government had reached a deal with the of PML-N withdrawing thousands of policemen to give a free hand to reach close to the Lahore airport and wind up the rally,” a senior police officer told PTI. “We have orders from our top command not to take action against the PML-N rally participants.”

Speaking to reporters before reaching the airport, Shahbaz said “a sea of people” had turned up to give Sharif a historic reception. “The people of Lahore have given a verdict ahead of July 25 polls,” he declared. “I am thankful to the people of Lahore for coming out in such a huge number,” he said, adding that the people have rejected the decision of the court to convict Sharif and Maryam.

Sharif was disqualified by the Supreme Court last year in the Panama Papers case and remains popular, particularly in Punjab, the most populous and electorally significant province. He and his party have accused the military of orchestrating his conviction, saying it is going after the PML-N for its criticism of the security establishment.

After the Supreme Court ousted Sharif last July, the courts barred him from heading the PML-N party that he founded. His brother Shahbaz became party president, but Sharif remains the power behind the throne. Since then, a host of his allies have been either disqualified by the courts or face corruption cases.