For the next few months, these idol makers would find themselves a home in the capital, and dedicate themselves to the services of various deities. A headless figurine of the goddess — her arms branching out — stood atop a semi-finished lion; a menacing Mahishasura at the feet, war-ready. The colossal frame, evidently unfinished, had a nightmarish touch to it. It was positioned deep inside an alleyway, in Kali Temple in Delhi’s CR Park, among other such idols, big and small, waiting for Bengal-based artisans to give their ‘Midas touch’, ahead of the annual Durga Puja celebrations. The idol makers were toiling hard, breathing life into these effigies; their unique sculpting skills having earned them the moniker of ‘makers of gods’.

When indianexpress.com caught up with them, they were neck-deep in work and tight on a deadline, fashioning an army of Hindu deities — raising them from mud, hay and clay.

“My house is in Kolkata, but I am mostly here; work goes on 12 months a year. After Durga Puja, we will get busy with the Kali Puja preparations, followed by Saraswati Puja. Prior to this, we were busy with Ganesh Puja — there are all kinds of gods, so work never stops,” Gobindo Nath of the Kali Temple in CR Park, said. 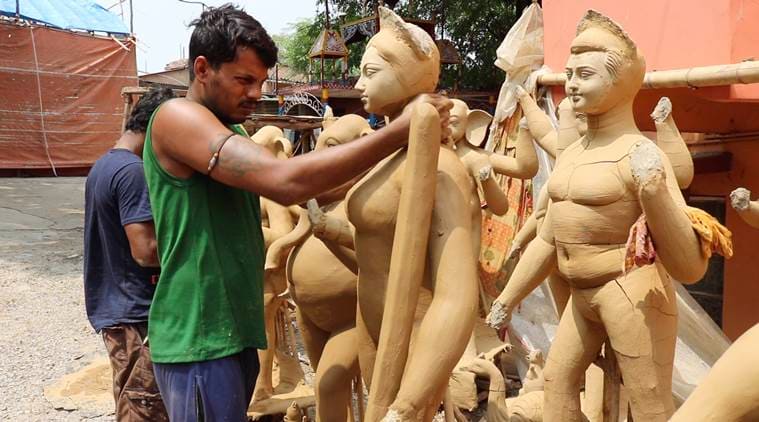 Every year, these idol makers get started in the months of June-July, just around the Rath Yatra celebrations.

Idol making, said Nath, has always been a family business; a skill having been generously passed through the generations. Manik Pal, who, along with his crew, has set up his shop in CR Park’s now-obsolete Chandralok Cinema — a dilapidated complex brought alive by the festive buzz — concurs.

“As artisans, we are all related. My grandfather was in the business of sculpting deities, so were my father and uncles. Now, I have taken it up as well. I am not sure if my son would be interested; he’s still studying. But, if nothing else works out for him in the future, he, too, will have to take up this familial business.”

The process of making idols is a complex one. Artisans have to toil day and night, and divide the work between shifts to build an idol of top-notch quality. “We have to first envision the end-result of our labour and begin backwards: what the goddess will look like, the size and the design. We begin with building a frame (the skeletal structure on which the entire masterpiece rests). Next, we cover it with straw and add mud to get the desired shape. The process is gradual because several layers of mud and clay are added before the structure is chiselled. Next, we go for the face (keeping in mind the minute details) and the fingers,” said Nath.

“The mud is sourced from parts of Punjab, but for the goddess’ face, we bring in special mud from Kolkata; we cannot risk having impurities — stones, leftover straw — while crafting the face,” said Pal. The final step, of course, is painting the idols, followed by decking them up with accessories sourced from various parts of West Bengal.

For the next few months, these idol makers would find themselves a home in the capital and dedicate themselves to the services of various deities. As such, they have built a mini-house, where they have a stock of food and supplies.

The regimen is killing, often merciless. As for the remittance for all their efforts, Nath said it depends on the type of idol. “What we charge depends on various factors — the kind of idol, the decoration, etc. It could be anything between Rs 20,000 and Rs 50,000,” he said.

Both Pal and Nath are adept artisans with a body of work that is recognised not only in Delhi-NCR but in other states as well.

“We make idols for various South Delhi pandals like CR Park, GK-II, Alaknanda, Pushp Vihar, and other parts of the capital like Sarita Vihar, and Sadiq Nagar. Our idols also travel to Punjab, Haryana and Rajasthan,” said Pal.

Akin to the years that preceded, Goddess Durga will once again be bejewelled and decked in regalia come October, with worshippers from all across Delhi-NCR, lining up to catch a glimpse. As for the efforts of these artisans — who probably will never get to enjoy the celebrity of their art — we can only but offer a ‘Dugga, Dugga!‘

West Bengal 12th exams likely to be postponed in 2021, discussions on to hold 10th boards on time

Vijay Deverakonda to make his Bollywood debut with Abhishek Kapoor’s next?
Celebrity News

Bigg Boss 4 Telugu: Karate Kalyani claims,  I have proof, my votes were diverted to others

CBI files cases against Nellore-based jewellers
We and our partners use cookies on this site to improve our service, perform analytics, personalize advertising, measure advertising performance, and remember website preferences.Ok