The election process was thrown into disarray following the Delhi High Court order asking for a stay on the declaration of the poll results — the counting of votes, which was to begin at 9 pm Friday, finally began at 3 pm Saturday, EC officials said. 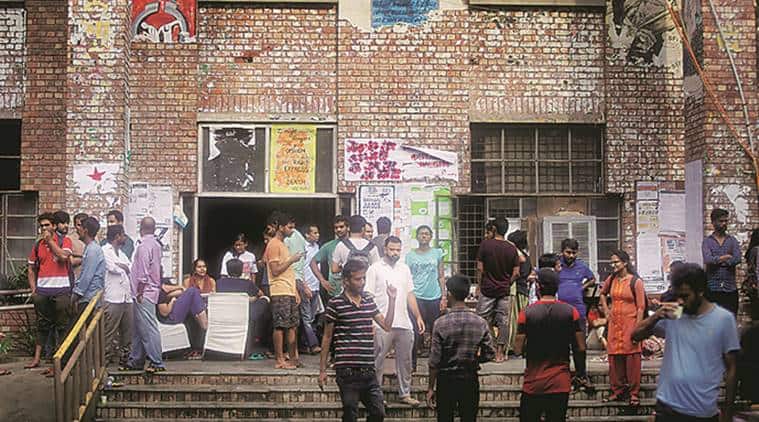 At around 11 pm, when 550 out of the 5,762 votes polled in the Jawaharlal Nehru University Students’ Union (JNUSU) polls had been counted, the United Left Panel was leading comfortably in all four posts.

For the post of President, AISA’s Aishe Ghosh was leading with 266 votes ahead of Ambedkarite BAPSA’s Jitendra Suna who got 108 votes. At the post of Vice-President, Secretary and Joint Secretary too, Left candidates Saket Moon, Satish Chandra Yadav and Mohd Danish were ahead by 271, 122 and 244 votes respectively.

While BAPSA-Fraternity alliance was on second position in President and Secretary — the only two seats they are contesting — the ABVP was on the second spot in the positions of Vice-President and Joint Secretary.

The election process was thrown into disarray following the Delhi High Court order asking for a stay on the declaration of the poll results — the counting of votes, which was to begin at 9 pm Friday, finally began at 3 pm Saturday, EC officials said.

A part of the delay was due to the deadlock between the Election Committee (EC), student organisations and the administration. The problem continued through the day.

In JNU, elections are held on ballot papers, and voting trends are announced by the EC after the counting of every few hundred votes. The EC decided Saturday that while the final result will not be announced, voting trends will continue to be announced until a certain point.

“After several meetings with all student organisations, and an internal meeting of EC officials, it was decided that counting agents of the parties will have to sign an undertaking that they will not make public the last 150 votes for the central panel seats, and the last bundle of votes (around 50) for the Councillor seats,” said an EC official, adding that the cumulative result at the end would also not be announced.

The tussle between the administration and students began late last night, when the EC, after deliberations, decided to begin counting at midnight.

CEC Shashank Patel said, “The counting process which was started on September 6 at 11:55 pm, had to be put on hold because of a deadlock situation between the students’ community decision about not following the GRC recommendations of undertaking to be given by counting agents, and also in regard to the declaration of final results.”

“Because a consensus could not be reached after so many hours, Election Committee decided to resume the counting process with declaration of trends but the final result will be withheld,” he added.

GRC chairperson Umesh Kadam did not respond to calls and texts seeking a comment.