Students in Class 10 have performed the worst in mathematics in the National Achievement Survey (NAS), conducted by the National Council of Educational Research and Training (NCERT) this year to examine learning outcomes across the county.

The average performance (mean percentage of correct responses) in mathematics was the highest in Andhra Pradesh at 40.94% and the lowest in Sikkim with 27%.

In other subjects — Science, Modern Indian language (MIL), English and Social Science — the average scores varied between 50-55%, according to the survey, which was seen by HT.

“We have prepared district-wise data so that states can prepare a strategy accordingly. Within the states, too, some districts require major interventions while they can also follow the best practices districts that have performed well,” said a senior NCERT official on the condition of anonymity.

Experts pointed out that the findings suggested that the mathematics syllabus needed a major overhaul as it is geared towards cracking competitive exams.

“Major concepts are squished into Class 9 and to lesser extent in Class 10 by CBSE and the state boards. The syllabus is geared for preparing for the IITs (Indian Institutes of Technology). More than 10 years ago, the mathematics syllabus included some topics purely because there were questions on these topics in the IIT entrance exams,” said Janaki Rajan, professor of education at Jamia Millia Islamia’s Institute of Advanced Studies in Education.

“We need to reflect on Mathematics education for all children, not only for competitive exams. We need to overhaul mathematics curriculum — not to dumb it down but to prevent dumping of topics for extraneous reasons and to aim for universal quality mathematisation,” she added.

Among the states, Delhi was one of the best performers and Jammu and Kashmir (J&K) one of the worst.

Delhi performed the best in average score in five subjects. J&K was in the bottom five in four of the five subjects — worst in Social Science, third from the bottom in science, second-worst in MIL and fourth-worst in mathematics.

J&K’s State Board of School Education (SBOSE) had adopted the NCERT systems and curriculum a few years ago, but with some changes. “Jammu and Kashmir has a peculiar problem as it is probably the only state with English as the medium of communication and hence comprehension not possible in their own language. At the same time in Jammu and Kashmir there were fewer working days compared to other parts so one can’t simply make any judgement. Unless they get 200 working days how are they going to learn?” Rajan said. 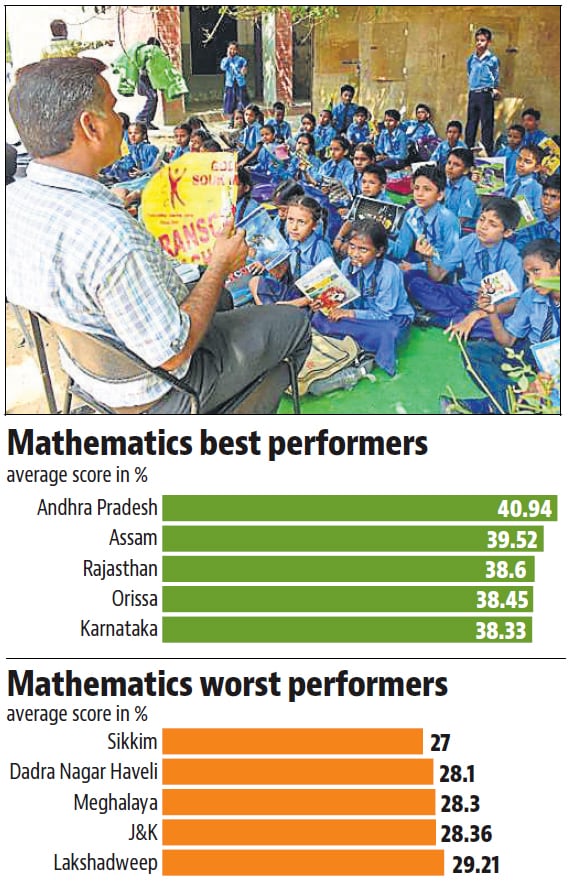