AP EAMCET Results 2019: When released, the candidates who have appeared for the AP EAMCET download their result from sche.ap.gov.in/eamcet. Individual results will also be available on the websites: vidyavision.com; manabadi.com, manabadi.co.in and schools9.com. 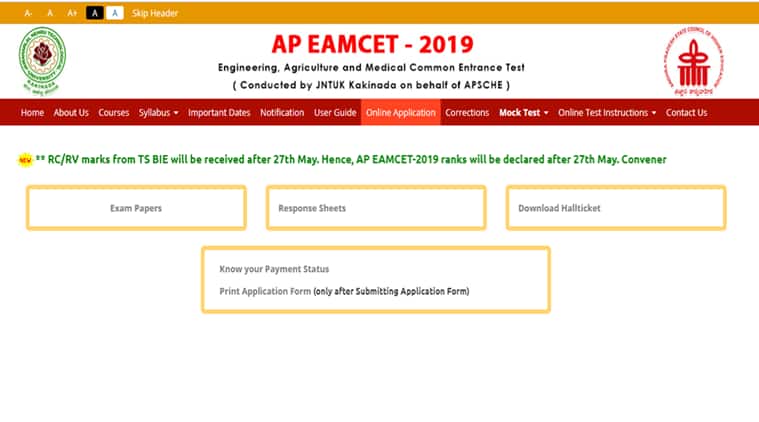 AP EAMCET Results 2019: The result for the Andhra Pradesh EAMCET examination is not releasing today, that is, May 27, 2019. When released, the candidates who have appeared for the AP EAMCET download their result from sche.ap.gov.in/eamcet. On the official website, a message by the AP EAMCET has been posted that the RC/RV marks from TS BIE will be received after May 27. “Hence, AP EAMCET-2019 ranks will be declared after 27th May.”

The examination was held from April 20 to 23, 2019. Individual results will also be available on the websites: vidyavision.com; manabadi.com, manabadi.co.in and schools9.com.

Every year, the AP EAMCET is conducted by Jawaharlal Nehru Technological University (JNTU), Kakinada on behalf of APSCHE for admission into various professional courses offered in university/private colleges in the state of Andhra Pradesh. It is a computer-based test conducted in two sessions – from 10 am to 1 pm and 2:30 pm to 5:30 pm.

The qualifying percentage of marks for the AP EAMCET-2019 is 25 per cent of the maximum marks considered for ranking.

Step 3: You will re-directed to another page. Here click on the ‘result’ link

Step 4: Enter registration, roll number and the date of birth

Step 5: The AP EAMCET result will appear on screen

Step 6: Download it, and take a print out for further reference.

About AP EAMCET
Jawaharlal Nehru Technological University, Kakinada conducts the EAMCET examination on behalf of Andhra Pradesh State Council of Higher Education (APSCHE) for admission to engineering, medical, agriculture and management courses. It is the second largest technical university in the country with 273 affiliated colleges. The university separated from the erstwhile Jawaharlal Nehru Technological University in 2008.

How event planners are adapting to the world of virtual shows

Cricket matches fixed, like movie directed by someone else: Bookie

Bengal records over 300 Covid-19 fatalities, total cases touch 4,813
We and our partners use cookies on this site to improve our service, perform analytics, personalize advertising, measure advertising performance, and remember website preferences.Ok