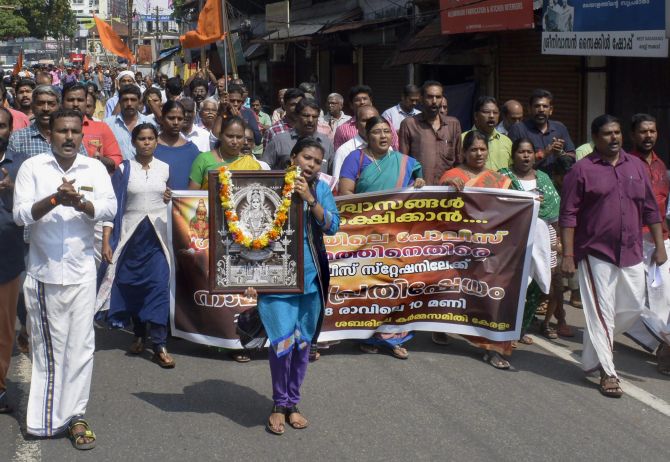 Yet another woman in the ‘barred’ age group made a futile attempt on Monday to reach Sabarimala but was forced to retreat by agitated protesters, while security was tightened at the shrine amid reports that more women of menstruating age could try to visit the temple before its doors close on Monday night.

Bindu, a Dalit activist, who was proceeding to Pamba at the foothills of Sabarimala temple from where devotees undertake an arduous 5 km trek to the shrine, was given police protection at her request, officials said.

However, when the Kerala State Road Transport Corporation bus she was travelling on with police personnel was about to reach Pamba, a group of Bharatiya Janata Party workers and those opposing the entry of girls and women aged between 10 and 50 years into the temple, blocked the road and forced her to alight.

She was then escorted to safety in a police jeep, officials said.

Nearly a dozen women have been turned back by angry protesters while attempting to visit the shrine of Lord Ayyappa, the presiding deity of Sabarimala temple considered ‘naishtika brahmachari‘ (eternally celibate), since its door opened for a five-day pooja on October 17.

No pooja was performed on the first day of the opening of the temple. The doors to the shrine will close at 10 pm on Monday.

Hundreds of devotees are camping at the Sabarimala Sannidhanam temple complex to prevent women of menstruating age group from reaching the shrine situated in a dense forest.

Despite clamping of section 144 of the Code of Criminal Procedure at Sabarimala Sannidhanam, Pamba, Nilackal and Elavumkal, hundreds of Ayyappa devotees have prevented women of the ‘barred’ age group from visiting the shrine.

Police have tightened the security at Sannidhanam and other areas following reports that some women could try to visit the temple.

Visuals of the officer offering prayers with tearful eyes before the deity were telecast by the local media.

Sreejith had faced the ire of the devotees for taking activist Rehana Fathima to the temple under police security.

However, police could not facilitate her entry into the main temple because of strong protests by Ayyappa devotees.

Amid high drama, the devotees, up in arms against the Kerala government’s decision to enforce the Supreme Court order lifting the ban on the entry of women in the 10-50 age group blocked the six — all Telugu-speaking women — from reaching the famed shrine.