Today, Walker, now over three years old, is at the centre of a conservation challenge to find whether establishing corridors from one “island-like forest” to another is the solution to accommodate the country’s growing tiger population. 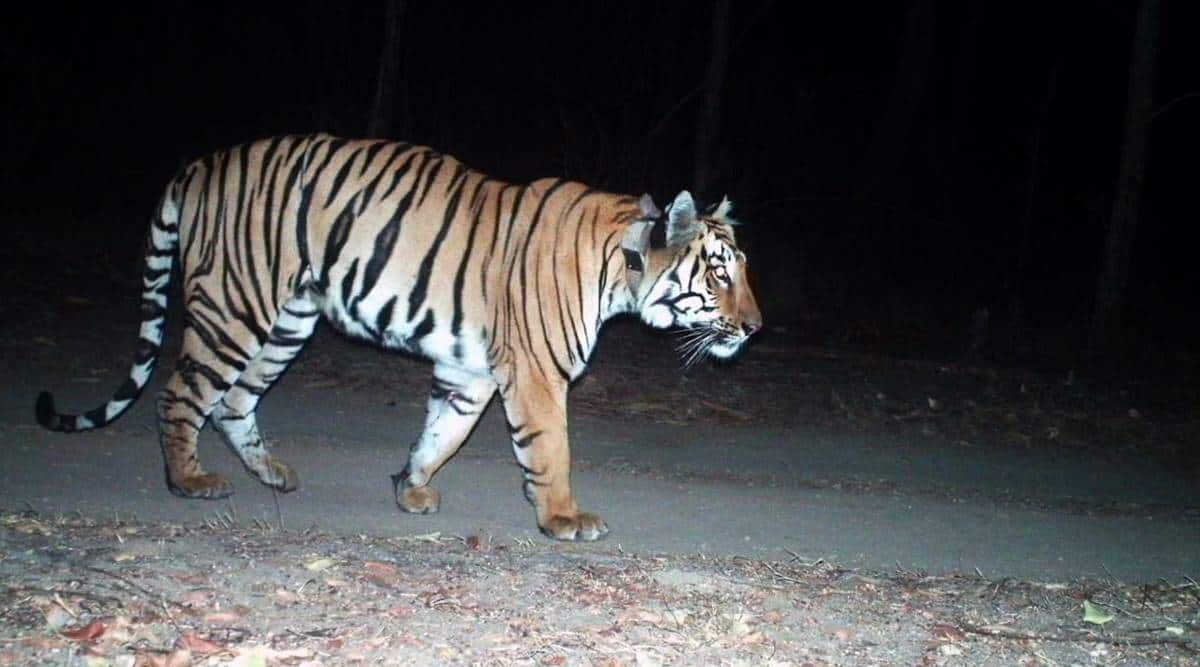 In March, a radio-collared tiger in India grabbed global attention by traversing a circuitous forest route from Yavatmal in Maharashtra through Telangana before re-entering the state to finally settle down in Buldana — an estimated distance of 3,000 km covered in nine months.

They called him Walker.

Today, Walker, now over three years old, is at the centre of a conservation challenge to find whether establishing corridors from one “island-like forest” to another is the solution to accommodate the country’s growing tiger population.

For now, officials say, Walker “seems to be doing just fine”, killing wild boars and blue bulls inside the 205-sq-km Dnyanganga sanctuary. But given its solitary life, they say, it will soon be time to find a mate.

Already, a government committee headed by Srinivas Reddy, the field director of Melghat Tiger Reserve who also supervises Dnyanganga, has recommended that a female tiger be translocated. But experts warn that “the challenge is much bigger than that”.

“Dnyanganga is like an island. Unless it has some connectivity to other tiger-bearing areas like Melghat in Amravati district and Muktai Bhavani in Jalgaon district, it makes little sense to facilitate the growth of Walker’s progeny in Dnyanganga. Where do they go and how do we ensure their genetic plurality?” says Nitin Kakodkar, Principal Chief Conservator of Forest (Wildlife), Maharashtra.

Dnyanganga, he reiterates, needs to be developed into a regular tiger-sustaining area by developing corridors to connect with other such locations. “We need to first facilitate connectivity before letting Walker’s tribe grow,” says Kakodkar.

Officials point to two forest stretches that can provide a larger area for a tiger population to move about: the 74-sq km Katepurna Sanctuary in Akola and the 18-sq km Karanja Sohol Sanctuary in Washim.

“But Katepurna is a degraded, thorny forest, and Karanja Sohol a grassland. They won’t be ideal for tigers. I thought Walker might walk in the direction of Melghat or Muktai Bhavani in search of a female since that area does have some tigers. But it has so far not gone that side. I hope it goes there this winter, which is supposed to be a breeding season,” says Kakodkar.

the all-India tiger census carried out by the Wildlife Institute of India (WII).

“For a tiger, the top priorities are having its own space and sufficient food. Walker became stable only after getting space and food. Providing a female is the easy option — we can do that —but for long-term conservation, we need to ensure proper channels for tigers to move in and out of Dnyanganga. That’s a tedious and challenging proposition. So we have to be very sure about what we are prioritising, and how,” says Bilal Habib, a senior scientist at WII.

Habib had radio-collared Walker in Tipeshwar, where the tiger was simply known as TWLS T1C1, or Tipeshwar Wildlife Sanctuary cub C1 born to tigress T1, before it left in June 2019.

Back in Buldana, meanwhile, there are demands to preserve Dnyanganga as a tiger area to facilitate tourism. Shiv Sena MP Prataprao Jadhav has suggested a 10-km elevated corridor between two villages to replace the 50-km Khamgaon-Buldana road cutting through the sanctuary. There are also plans to relocate the only village inside the sanctuary.

Kakodkar says it’s for the government to decide if it can build such a long elevated corridor. “There are two alternative routes already available for road traffic. But people need to be convinced to take the detour that’s about 25 km longer,” he says.

Something has to be done soon, says Nitin Desai, director, central India, Wildlife Protection Society of India. “Otherwise, Walker’s epic journey would end up as a footnote in India’s tiger conservation success story,” he says.