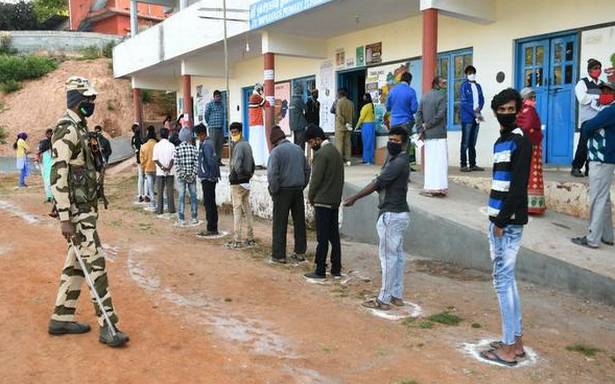 After an estimated contraction of 8% in the fiscal year that ended March 31, India is projected to grow at 12.5 % during the current year, settling down to 6.9% growth year (FY22/23), according to the World Economic Outlook (WEO): Managing Divergent Recoveries, released by the IMF as the World Bank IMF Spring Meetings kick off virtually.

The daily rise in new coronavirus infections in India remained above 90,000 for the third consecutive day taking the nationwide COVID-19 tally of cases to 1,26,86,049, according to the Union Health Ministry data updated on Tuesday.

Like any other Assembly election, voters in Assam, where the final phase of polling ends on April 6, will be choosing a government by May 2. However, for the State, the election is likely to have implications beyond who wins and who loses. It could well settle some of the questions/issues that have come to define recent politics in the State.

Amid events to mark the 41st foundation day of the Bharatiya Janata Party (BJP) on Tuesday, Prime Minister Narendra Modi told his partymen to create awareness among the people on welfare schemes run by the Central government and combat what he termed “false narratives” by opponents on the controversial farm laws and the Citizenship (Amendment) Act (CAA).

President appoints N.V. Ramana as CJI with effect from April 24

Police are exploring all channels, including contacting local villagers, to trace the missing CoBRA commando whom the Maoists claim to have abducted after an encounter in Chhattisgarh’s Bastar region three days back, a senior official said on Tuesday.

A solution of the Afghan civil war should balance the ethnic and religious groups of Afghanistan and no group should be left out of the final settlement of the war, said Russian Foreign Minister Sergey Lavrov here on Tuesday after holding bilateral discussions with his Indian counterpart Dr. S. Jaishankar. Mr Lavrov said India and Russia are working for stability and connectivity in the Asia-Pacific and urged that “security alliances” should not come up in Asia.

Bharti Airtel on Tuesday said it has entered into an agreement with Reliance Jio Infocomm to transfer ‘Right to Use’ for some of its 800 MHz spectrum in three circles to the Mukesh Ambani-led firm.

BCCI President Sourav Ganguly on Tuesday said Indian cricketers are "more tolerant" when it comes to dealing with mental health issues compared to those from England and Australia, but acknowledged that being confined to bio-bubbles amid a raging pandemic is not easy for anyone.

COVID-19 is spreading at a fast pace with an increase in the intensity of the pandemic and the next four weeks are going to be very critical, the Centre said on Tuesday as it stressed on people’s participation to control the second wave of the contagion.