A Lashker-e-Tayiba terrorist involved in a recent attack on a fruit merchant’s home in Sopore was gunned down by security forces in the Jammu and Kashmir town, police said.

Two police personnel were injured in a grenade blast at the encounter site and are out of danger.

The terrorist, identified as LeT’s Asif Maqbool Bhatt, was killed in a brief encounter in Sopore in the valley’s Baramulla district, police said.

The encounter broke out when security forces, acting on specific information, launched a search and cordon operation in the town to flush out the hiding terrorist.

“He (Asif) was challenged to stop but he didn’t. He threw a grenade at our parties in which two of our police personnel were injured. They are out of danger,” Jammu and Kashmir Director General of Police Dilbag Singh told reporters in Srinagar.

He said Bhatt had created terror in Sopore.

“Over the last one month he was very active. He made use of overground workers to print posters threatening civilians to not open shops shops and not go for their day-to-day activities”, he added.

Bhatt was responsible for a recent attack on the home of a fruit trader in Sopore, police said.

Three members of Hamidullah Rather’s family, including his toddler granddaughter, were injured in the attack.

Two men went to his residence and, not finding him home, they shot at and injured his family members. 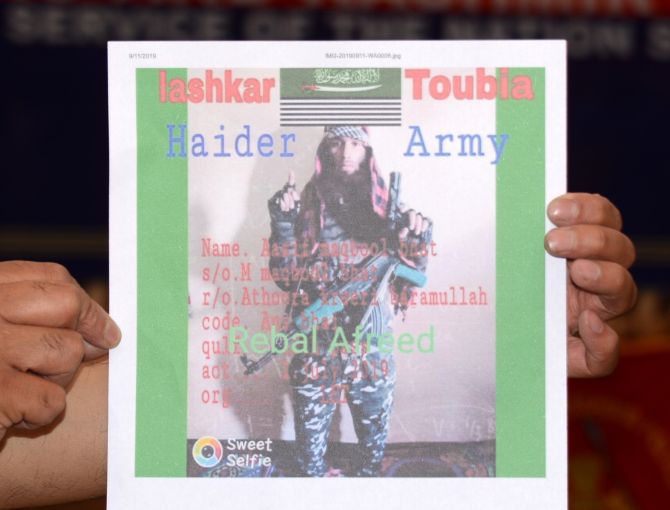 No fresh recruitment of local youth among terrorist ranks: DGP

The DGP said there have been no reports of any fresh recruitment of local youth joining terrorist ranks in the state, where life is returning to normal.

The DGP also said there are some incidents of terrorists threatening fruit dealers in south Kashmir against collecting fruits but police is aware about the situation and ‘our job is to facilitate the process and ensure that no one is able to harass them’.

“There have been no reports of any fresh local recruitment among the militant ranks. Some youth had been misled (in the past) and in a fit of anger gone astray, and we have been able to bring many of them back,” Singh told reporters Srinagar.

He said there are some reports of infiltration and ‘we recently saw two Pakistani terrorists apprehended by the Army in Gulmarg sector’.

On September 4, the Army said Pakistan is pushing infiltrators into Kashmir to carry out terrorist activities and create disturbance while playing video clips showing two Pakistani nationals associated with the Lashker-e-Taiba (LeT) terror group — Mohammad Khalil and Mohammad Nazim of Rawalpindi — who were arrested in Gulmarg sector on August 21.

On the prevailing situation in the Valley, the police chief said, “Life is returning towards normalcy and people are going about their activities with school and offices open.”

However, Singh said there were some incidents of terrorists threatening fruit dealers in south Kashmir, telling them not to collect fruit but people are doing it.

“Our job is to facilitate the process and we want to ensure that no one is able to harass people…We do not tell people what to do or what not to do,” the DGP said.

He said even on Wednesday more than 230 truck loads of fruits were dispatched to markets outside the Valley from a particular south Kashmir district.