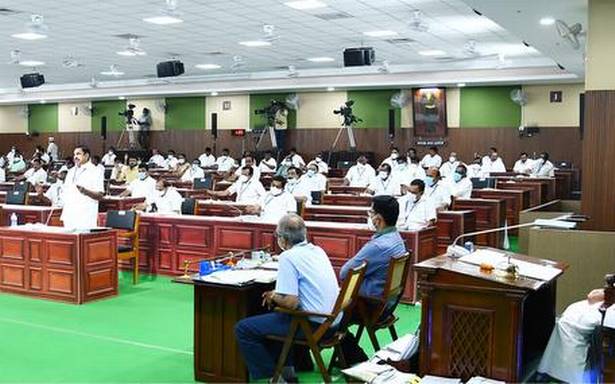 Ahead of the upcoming Assembly polls, Tamil Nadu Chief Minister Edappadi K. Palaniswami on Friday announced that the State government would waive crop loans outstanding in cooperative banks to the tune of ₹12,110 crore. The move will benefit over 16.43 lakh farmers across the State.

In a suo motu statement in the Legislative Assembly, Mr. Palaniswami said that the decision was taken “considering the prevailing situation”. He also recalled the representations received from the farming community seeking a waiver of the crop loans.

Referring to the DMK’s promise ahead of the 2019 Parliamentary polls that they would waive the crop loans if they won the elections, Mr. Palaniswami contended that they forgot their promise even though 38 DMK [alliance] candidates were elected to the Lok Sabha. “They forgot the promises made to the people soon after they won the polls. This has been their practice every election,” he charged.

“The AIADMK government is the only one that implements the promises made to the people,” Mr. Palaniswami contended. He recalled that in 2016, then Chief Minister Jayalalithaa had waived off farm loans to the tune of ₹5,318.73 crore to benefit over 12.02 lakh farmers. The AIADMK government had also extended relief of about ₹2,247 crore to farmers who suffered losses due to a drought in 2017.

The CM said that his government has disbursed relief of about ₹1,717 crore to over 16.43 lakh farmers, whose crops were affected by the heavy rains during 2019-20.