Congress leader Shashi Tharoor on Monday suffered head injuries when the hook of a weighing scale came off and hit his head while performing the ‘thulabharam’ ritual at a temple in Thiruvananthapuram. 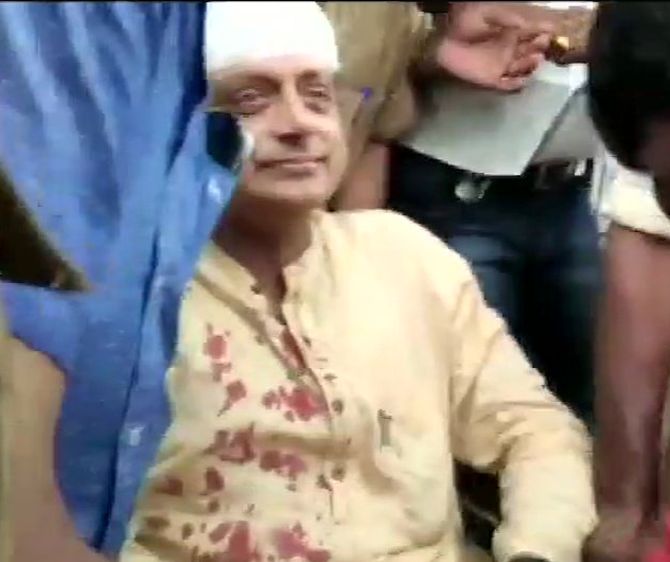 According to party sources, Tharoor, who is aiming for a hat-trick from the Thiruvananthapuram Lok Sabha constituency, sustained injuries on his head, which required six stitches.

The 63-year old MP also suffered a minor leg injury in the incident which occurred at a Devi temple.

‘Thulabharam’ is a Hindu ritual in which a person is weighed against a commodity such as flowers, grains, fruits and similar articles in temples and the equal value or
quantity is offered as donation.

Monday being the Malayalam new year day (‘Vishu’), Tharoor performed the ritual by offering sugar equal to his weight in the morning before embarking on his poll campaign.

He was accompanied by his family members and party leaders and workers including MLA, V S Sivakumar.

While he was sitting on one of the pans of the weighing scale, the hook came off and fell on his head, the party sources added.

He was taken to Trivandrum Medical College hospital for detailed examination, the sources said.

Television channels showed the former union minister getting into a car with a bandaged head and waving to onlookers wearing a blood-stained kurta.

Son of a farmer, Bihar Board Class 10 topper has no device to study online, wishes to join IIT
Celebrity News

Most viruses do not spread easily on flights: CDC
We and our partners use cookies on this site to improve our service, perform analytics, personalize advertising, measure advertising performance, and remember website preferences.Ok