‘Chest-thumping on-air theatrics on television are no consolation for families who’ve been forced to embrace the price of war,’ notes Nikita Puri.
Illustration: Dominic Xavier/Rediff.com 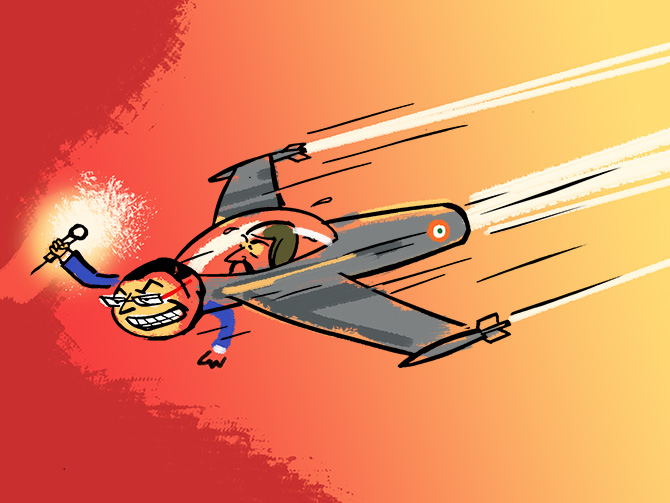 What: The dizzying downfall of India’s television channels was a subject well-discussed on social media platforms across the globe.

Claims of objectivity were gone with the wind faster than we could Google Balakot, the town in Pakistan alleged to be a camp for Jaish-e-Mohammed terrorists. This group had claimed responsibility for the attack on a convoy carrying Indian security personnel in Pulwama, Jammu and Kashmir, on February 14, which left 40 CRPF personnel dead.

When: Television newsrooms in India have only grown louder in the last few weeks, an event that no one thought was possible.

Riding on unnamed sources, journalists quoted unverified figures, from 300 to 650, citing the number of militants killed in Pakistan by Indian forces in retaliation for Pulwama.

The sense of decorum, dignity and sensitivity was missing even when Abhinandan Varthaman, a wing commander in the Indian Air Force, was captured in Pakistan.

When questioned by the Pakistani army, the officer stoically declined to share any details. But if Pakistan needed anything, all it had to do was look to the Indian media, which had already tracked down the officer’s family and residence details for the world.

How: Even as defence chiefs deliberated on how to proceed after Pulwama, our microphone-wielding brigade was ready to go to war, but only as long as it could do it from the newsrooms.

Okay, some of them did go beyond their studios — to Twitter — to display their all-consuming love for the motherland.

One Hindi news anchor, in a performance that would have got a standing ovation at the National School of Drama’s recently concluded annual theatre festival, went on to stage a dramatic piece, now called Tauba Tauba on social media, as she spoke about bombs being dropped in terrorist territory. Then, while mocking how Pakistani citizens talk, she went on to mock even children born in Pakistan.

If only such things didn’t matter, but the fragility of man’s easily inflatable ego mustn’t be tested — certainly not at such a sensitive time.

Such has been our coarse coverage that it had Anand Mahindra asking a newsman to tone it down. ‘I rarely comment on media postures. But the prime objective now is to allow our soldier to come home safely. This isn’t the time to jeopardise that event with such calls for celebration… Arnab, please, we must exercise restraint,’ Mahindra tweeted to the original custodian of TV studio-led nationalism.

Now: Ask anyone who has even remotely felt the ravages of war, and they’ll tell you they’d prefer the oft-tedious Doordarshan treatment of news over anchors celebrating hyper-nationalism.

It comes as no surprise that Indian media is being compared by many to Fox News on steroids, which isn’t exactly high praise. But when news channels run tickers that would fit better in a Sunny Deol movie — ‘Dushman ko mitti mein milana mumkin hai (you can make your enemy bite the dust)’ — – and give airtime to panelists who seem gleeful about someone’s death, perhaps it’s a comparison we deserve.

Chest-thumping on-air theatrics used on television are no consolation for families who’ve been forced to embrace the price of war. And, they endanger the lives of those wrapped up in ongoing conflict.

One wonders if the flak the Indian media has received will change anything at all.

After all, in a political climate where wearing your patriotism on the sleeve is de rigueur, the much-required moment of contemplation has lost its way.

Sringeri MLA tests positive
We and our partners use cookies on this site to improve our service, perform analytics, personalize advertising, measure advertising performance, and remember website preferences.Ok