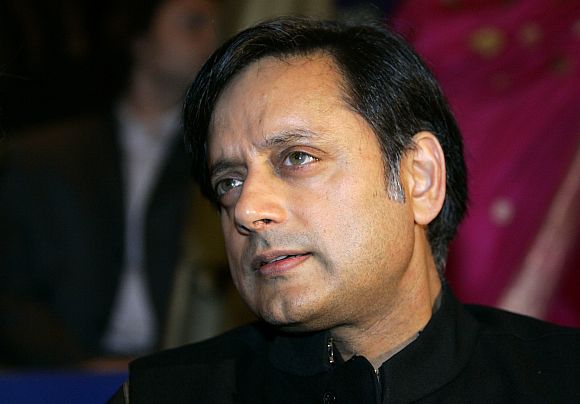 In a hard-hitting retort to Pakistan, Swaraj had said India has made many efforts to hold talks with Islamabad and the only reason New Delhi has called off dialogue is because of Pakistan’s behaviour.

Pakistan’s commitment to terrorism as an instrument of state policy has not abated one bit, Swaraj told world leaders at the UN on Saturday and asked them how India can pursue talks with a nation that “glorifies killers” and allows the Mumbai attack mastermind to “roam free” with impunity.

Tharoor alleged that the speech was aimed at Bharatiya Janata Party voters.

“We get the sense that everything is about the political environment in India. And this was a speech aimed at the BJP voters and sending a message to the voters particularly on the subject of Pakistan rather than projecting a constructive and positive image of India in the world,” he said.

To that degree, it was a “disappointing” speech, he said in Thiruvananthapuram.

“I think some of the things Sushmaji said one can fully appreciate and welcome. But some of the statements were disappointing,” he said.

Reacting strongly to Tharoor’s criticism, Bharatiya Janata Party spokesperson Sudhanshu Trivedi said the Congress is being increasingly seen to be standing with Pakistan as Tharoor’s statement was not an isolated incident and the opposition party often spoke the language of the neighouring country.

He told a press conference that the Congress should apologise to the country and said its stand on various issues appeared similar to that of Pakistan in “intent, language and style”.

“There has been an established convention in politics since independence that political parties are unanimous on foreign issues, at least when it comes to taking a stand at the United Nations (UN) where India’s position is not of a political party.

“Pakistan has always opposed us there. For the first time a senior Congress leader is also criticising,” Trivedi said.

He said Tharoor had used the term “Hindu Pakistan” to attack the BJP’s rule.

The BJP leader also cited comments of Congress leaders like Mani Shankar Aiyar and Ghulam Nabi Azad to liken it with Pakistan in its opposition to the Modi government.

He said the Congress has lost the “moral right” to claim to be the party of Mahatma Gandhi, wondering if the Congress in zeal to oppose Prime Minister Narendra Modi was also opposing the country.

The BJP in opposition behaved responsibly, the spokesperson said.

Trivedi said Atal Bihari Vajpayee had put up a robust defence at the United Nations of the then Indian government headed by P V Narasimha Rao, while Modi had slammed then Pakistan prime minister Nawaz Sharif for his swipe at his Indian counterpart Manmohan Singh.

Attacking the Congress, he said it, like Pakistan, has also attacked the RSS, the ideological parent of the BJP, and was now criticising the Rafale deal.

The alleged similarity in the stands of Pakistan and the Congress was also there when the latter was in power, he claimed.

He cited terrorist outfit Lashkar-e-Toiba’s founder Hafiz Sayeed’s alleged praise of the then home minister Sushil Kumar Shinde for his use of the term “Hindu terror” in 2013 and of another Congress leader Digivijay Singh after he allegedly linked the RSS to the Mumbai terror attack in 2008.

Watch | At the Gangasagar Mela
We and our partners use cookies on this site to improve our service, perform analytics, personalize advertising, measure advertising performance, and remember website preferences.Ok