Experts don’t believe gold will decline to the Rs 40,000-level. The downside may at most be another Rs 1,500, so they do not recommend selling. 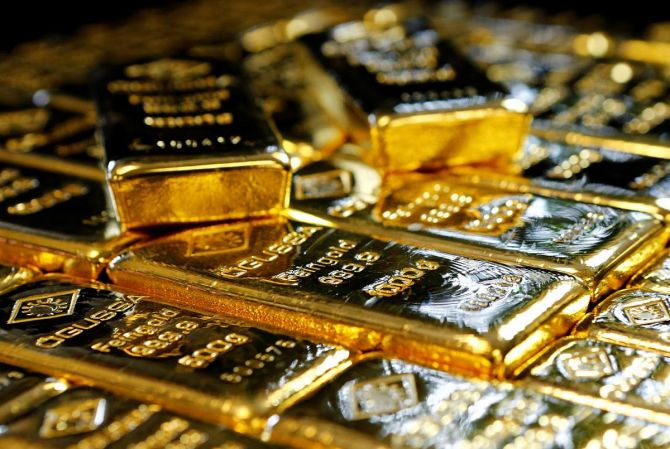 Gold appears to have lost its sheen in recent months.

It is down 5.8 per cent over the past three months.

The yellow metal has got hammered primarily due to news flow indicating a Covid vaccine may become available earlier than expected.

Naveen Mathur, director of commodities and currencies, Anand Rathi Share & Stock Brokers, says, “Overall, people are anticipating the worst is over. Therefore, money is being driven into risky asset classes instead of being held in a risk-averse asset class like gold.”

Bull run may have steam left

Many experts are of the view that gold’s bull run may not be over yet.

“While we may not see sharp uptrend, as in August, gold could start moving up again if the spike in the number of Covid cases continues in the US and other big economies,” says Mathur.

The optimism on vaccines may not sustain as it is unlikely to become available to the public before mid-2021.

To support their economies, says Mehta, governments will resort to more stimulus measures over the next two-three years.

Such policies will be positive for gold.

Interest rates are also likely to stay low in nominal terms and negative in real terms in the foreseeable future.

The US Federal Reserve has announced it would keep rates near zero till 2023.

Gold tends to have a negative correlation with real interest rates.

Mehta is of the view that the decline in gold prices is temporary and its outlook remains positive, so investors should buy on dips and accumulate gold to benefit from its positive long-term prospects.

What should you do?

Your actions should depend on how much gold you hold in your portfolio.

“Gold should have an allocation of 10-15 per cent of your entire portfolio,” says Mathur.

As for the price at which you should buy, Kishore Narne, associate director and head of commodities and currency, Motilal Oswal Financial Services, says, “Anything between Rs 46,000 and Rs 47,000 per 10 gram is a value-buy for investors looking to stay invested for 12-18 months.”

So, someone whose allocation to gold is below 10-15 per cent, should wait until it reaches these price levels and then buy.

Narne adds that someone who already holds adequate gold in his/her portfolio should continue to hold it.

He has a positive view on gold over 12-18-months, though it may remain volatile in the short term.

None of the experts Business Standard spoke to believes gold will decline to, say, the Rs 40,000-level.

The downside may at most be another Rs 1,500, so they do not recommend selling.

As for the instruments to use for holding gold, M Barve, founder, MB Wealth Financial Services, says, “The best way to invest is in a disciplined manner via gold exchange-traded funds and whenever the government issues new tranches of Sovereign Gold Bonds.”