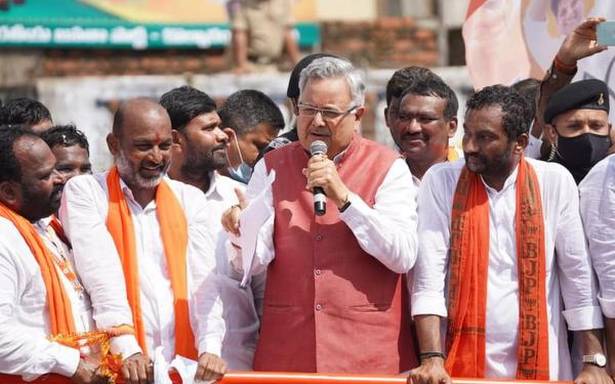 Why blame Centre for your inefficiency in paddy procurement, questions BJP State president

Telangana BJP president and Member of Parliament Bandi Sanjay Kumar joined issue with Chief Minister K. Chandrasekhar Rao asking farmers not to go for paddy in the next agriculture season on the premise that the Centre has restricted to 60 lakh tonnes procurement only.

“Why drag and blame the Centre for your failures? Who asked you to sign agreement for procurement of 60 lakh tonnes only instead of asking the entire produce be purchased? Why can’t the TRS government procure 20 lakh tonnes of paddy for the State needs?,” he asked on Monday.

Addressing a public meeting at Pothamsettipally in Medak as part of his ongoing 17th day of ‘Praja Sangrama Yatra’ along with former Chhattisgarh Chief Minister Raman Singh, the BJP leader said Mr. Rao has been changing his stance on agriculture issues often – cheating farmers with double speak and putting them in a quandary.

“Till recently, he called for stopping cotton cultivation and retracted, the same vein continued with paddy on cultivating fine varieties. Did he not assure buying every single grain that is produced in Telangana? He wants to cover up his own inefficiency by transferring the blame on the Centre," he charged.

While the Centre has been regularly enhancing the minimum support price and providing subsidy to the farmers, the government here has been denying the same benefit here. On top of it, there is no government help to farmers in distress following the recent heavy rains, he said. The area has been deprived of proper irrigation facilities despite Manjira river.

The TRS government has failed the farmers in the last seven years and Mr. Rao has to apologise to the people for not fulfilling election-eve promises. The government has been able to build just 12,000 houses when the Centre had granted three lakh, the BJP is ready to get more houses sanctioned, he said.

“There are no double-bedroom houses, no jobs and no stipend to the unemployed youth. Everyday we see attacks on the poor and disadvantaged groups. I demand the resignation of the Home Minister by accepting moral responsibility for the rape and murder of six-year-old girl,” said Mr. Sanjay Kumar. The party chief stated the BJP does not discriminate in providing welfare or development schemes to people — be it in supply of subsidised rice, toilets construction, road development, water supply etc., but will not tolerate any kind of “insult” to the majority community, he said.

He claimed the people of Telangana have realised that Mr. Rao has taken them for a ride.

Mr. Raman Singh said the countdown for the downfall of the TRS regime has begun and expressed the confidence that the BJP will form the government after 2023 polls. “Corruption and single family rule has stopped the development of Telangana. None of the promises made in TRS manifesto have been implemented,” he said.

Dubbak MLA M. Raghunandan Rao and others participated in the meeting.

Later, in the evening Union Minister of State for Agriculture Shobha Karandlaje also joined Mr. Sanjay Kumar’s programme and interacted with the employees of the shut down Nizam Sugar Factory. They presented a memorandum seeking revival and complained that the TRS government did not take any steps to reopen the unit despite making assurances during the agitation for separate State.

Talking to the media, the Minister charged that the Chief Minister did not give her appointment when she was wanted to meet and discuss agriculture and farmers issues with him. “Where is Mr. Chandrasekhar Rao? He has been sitting at home and ruling. How many people has he met in last seven years? He has only cheated people with false promises. We will definitely take action against his corrupt rule at the right time,” she claimed.