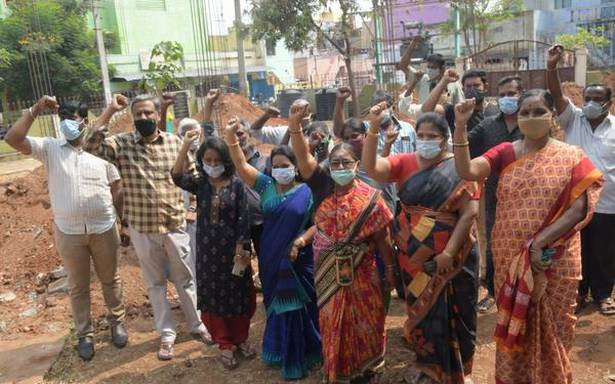 Opposing the Corporation’s move to establish a hospital on the Children’s Park premises at R.K.V. Nagar in Ward 24 at Karungalpalayam, residents staged a protest here on Tuesday.

The park was established at ₹6.50 lakh in Zone 1 and is being used by the public for the last 10 years. A week ago, foundation was laid on the park premises for a hospital that was opposed by the local residents. They also submitted petitions to the Corporation officials. Land levelling works were carried out and the residents continued to oppose the works.

On Tuesday, pits were dug for constructing pillars and the residents gathered on the park premises and wanted works halted. They raised slogans and wanted the hospital constructed at an alternative place. They said that over 100 residents used the park for walking during morning and evening while children also spent their time in the park.

Corporation officials assured them that the issue would be taken up with the Corporation Commissioner for action until which works would not be carried out. Later, the protest was withdrawn.