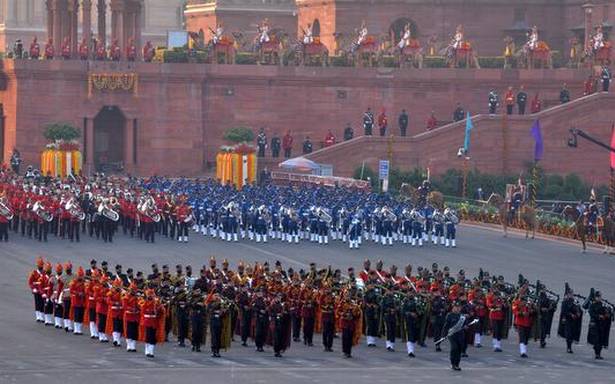 Seats were at a fair distance from each other, and not only the attendees but the officers who performed with their drums and pipes had masks on. What stole the show of Beating Retreat was an old favourite composition by the Air Force Band.

As the Republic Day celebrations came to a close with Beating Retreat at Vijay Chowk on Friday, the drums embedded with white light played by the Air Force Band, especially during their composition “Evening Star”, got a round of applause louder than the rest.

“All of it was absolutely amazing. But ‘Evening Star’ stood out for me. It was really upbeat and different. It was a performance which millennials like us could connect with,” said Sneha Bhansali (21) who had come with her friends to the event for the first time on Friday.

Another element of the event which caught people’s keen attention was a song on the Indian Army titled ‘Hum sher hai Galwan ke’, with a video playing out in the background of Army officers in Galwan.

There were a few new performances this time, including ‘Tiranga Senani’ and ‘Nidar Yodha’ presented by the Air Force Band, ‘Bharat Vandana’ by Naval Band, and ‘Abhinandan Bharat’ and ‘Sambhodan Echo’ by Army Military Band. The retreat ended with the hymn ‘Abide with me’ followed by ‘Saare jahan se accha’, which visibly evoked a feeling of patriotism in the crowd.

While the number of guests this time being limited owing to COVID-19, a few managed to get entry passes. Harsh Bhandari (17), a resident of Hauz Khas, who had come with his mother, said: “I have come for the third time and I think I will continue to come as I want to join the Army eventually. This event fills me with patriotism.”

This was the first time for 76-year-old Krishna Aggarwal at the event, which he had been wanting to attend for last many years. Her four daughters and husband are working for the defence forces and she never got an opportunity to attend one. “I was born before independence so all such events fill me with pride,” she said.