A man, seeking to apprise Punjab Chief minister capt Amarinder Singh of his problem, reached too close to him prompting the security personnel to pounce on him. Amarinder, however, extended a helping hand to the man and ordered immediate redressal of his complaint. 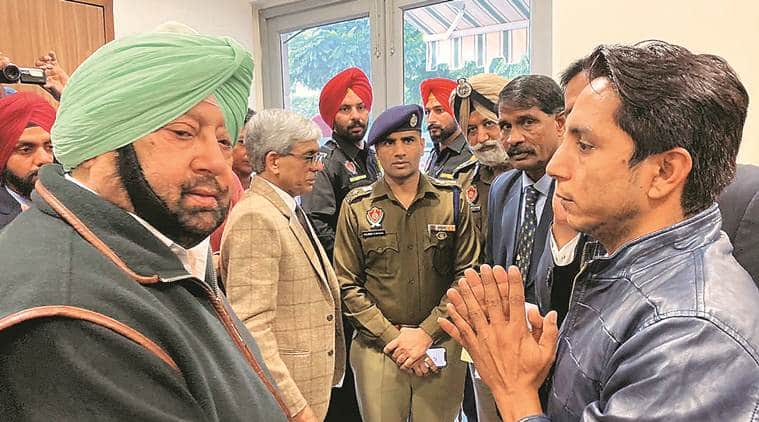 In a serious breach of security, a man, seeking to apprise Punjab Chief minister capt Amarinder Singh of his problem, reached too close to him prompting the security personnel to pounce on him. Amarinder, however, extended a helping hand to the man and ordered immediate redressal of his complaint.

The incident occurred while Amarinder was in the midst of an interactive session with NDTV executive co-chairperson Prannoy Roy on the opening day of the two-day Progressive Punjab Investors Summit at India School of Business here.

Amandeep Singh, a Dera Bassi resident, made his way to the hall and interrupted the session waving a file to attract CM’s attention. As security personnel caught hold of the man, the CM asked Them let the youth wait and took a file from his hand. Amandeep accused the police of “highhandedness” by getting him evicted from a land for which he had lease papers. Referring to Amarinder as “raja sahib” who “did justice”, the man sought his intervention

CM’s Chief Principal Secretary Suresh Kumar took the file from CM who told him to look into the matter.

“You certainly have democracy in Punjab. The way you handled it was great,” Roy said as he resumed the session.

An official spokesperson in a written statement later said that Amarinder had ordered the Mohali SSP and DC to investigate his complaint and take suitable action.

“Amandeep Singh had approached the CM with his complaint. He handed over certain documents to the CM before being whisked away by the security personnel. However, the CM asked his security persons to let him wait till the end of the session, after which he met Amandeep, who complained that while a case relating to his shop in Dera Bassi was still pending in court, a property dealer had evicted him and locked him out,” said the spokesperson.

“The CM immediately directed SSP Kuldeep Chahal and DC Girish Dayalan to restore the shop, reportedly belonging to the Waqf Board, to Amandeep after verifying the facts. Meanwhile, in view of the apparent breach of security involved, the CM’s CPS Suresh Kumar, who was also present at the session venue, has sought a detailed report into the incident ,” added the spokesperson.

Amandeep, detained by the police at the venue till evening when The Indian Express spoke to him, when asked about how he managed to reach the ISB and hall where only delegates, journalists with passes and officials could cnter, told The Indian Express, “I came in my car and told the security that I am from press. They let me in.” He was wearing investors summit string around his neck without any badge, which he said he found after entering the venue and used to enter the hall.

Election Commission to announce Bihar Assembly election dates at 12.30 pm
We and our partners use cookies on this site to improve our service, perform analytics, personalize advertising, measure advertising performance, and remember website preferences.Ok