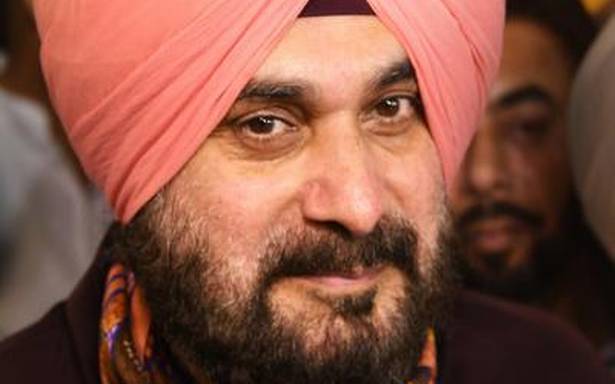 Former State unit chief says posts not important for him

A day after he resigned as president of the Punjab Congress, Navjot Singh Sidhu on Wednesday hardened his stand, saying he will stick to his principles and continue his fight even if it means losing everything.

Mr. Sidhu said during his 17 years of political journey, he had been working with a purpose to improve the life of people in Punjab and make a difference.

Taking a principled stand on issue-based politics and sticking to it has been the core of his political journey, he added.

“My fight has always been on issues and Punjab-favoured agenda, it has never been personal. There’s not going to be any compromise surrounding my struggle on Punjab’s rights and truth..In my fight, positions have never been relevant,” said Mr. Sidhu.

Launching an attack on his government without naming anyone, Mr. Sidhu said the issues for which had taken a stand before the people of Punjab were being compromised.

Raising the Behbal Kalan police firing case of 2015, related to the Bargari sacrilege issue, which has been a political flash point in the State politics, Mr. Sidhu said people who had given a clean chit to the “Badals” and people who had fought for ‘blanket bail’ for the accused were today appointed to key posts such as Advocate-General.

“The people who were earlier talking about issues… where are they now and where are the resources through which we would have achieved our objective?” asked Mr. Sidhu.

“I can neither mislead the high command nor let it get misled. While fighting for the cause of Punjab, I am willing to make any sacrifice but will continue to stand on my principles. The system was full of tainted officers and leaders, and now again they have been brought back. I oppose it. I’ll stick [to my principles] and fight – if everything goes, let it be,” said Mr. Sidhu.

The Congress party’s crisis in Punjab spiralled further on September 28, with Mr. Sidhu resigning from his post, Minister Razia Sultana quitting her post in support of him and some other leaders too coming out in his support.

Mr. Sidhu announced his resignation hours after portfolios were allocated by Mr. Channi. His suggestions on ‘choices of bureaucrats and ministers’ were believed to be overruled by the party leadership.

A close aide of Mr. Sidhu told The Hindu that he was miffed at the re-induction of Rana Gurjit Singh in the Cabinet.

Mr. Rana Gurjit Singh, MLA from Kapurthala, faced allegations of involvement in a sand mining scam and quit Capt. Amarinder’s Cabinet in 2018. He was given a clean chit by an inquiry commission headed by a former High Court judge.

Also, the appointment of senior advocate A. P. S. Deol as Advocate-General was another reason for Mr. Sidhu’s decision, the close aide stated. Mr. Deol was counsel for former Director General of Police Sumedh Singh Saini, an accused in the Behbal Kalan police firing case of 2015.