Here was an Indian like you and me, who reached the country’s highest office without compromising on his integrity or values. Here was a politician who was not a Muslim, or Tamil, or a boatman’s son — but an Indian President, who opened his office to all Indians, says Sriram Karri.

India’s tryst with socialism had disappointed, becoming stale in rhetoric and heading towards a dead end. Corruption and socio-political cynicism had peaked. The Emergency and a failed Janata experiment reduced expectations from the ideals of the Preamble to a mere slogan, Garibi Hatao, and when that too did not materialise, we made an icon of the Angry Young Man.

The economic liberalisation era heralded a new hope, laying the foundation for a new middle class nation with its unique values, aspirations and thirst for new heroes.

A whole new pantheon was built in the nineties and included heroes like Sachin Tendulkar, Sri Sri Ravi Shankar, Rajinikanth and Narayana Murthy. But the biggest of them was to be a nation building icon who could inspire us to reclaim our stolen dreams. That idea, whose time had come, was the People’s President, A P J Abdul Kalam.

The values these middle-class heroes shared were perfect. They came from humble backgrounds, inherited nothing, rose by the sheer dint of their hard work, had a passion for excellence and, with impeccable character and integrity, commanded the aam janta‘s affection due to their nature which was humble, simple, warm and open.

None of them had the looks or physical attributes necessary in an age that was increasingly conscious of packaging. As a result, they represented the aspirations of millions. Despite their success, they never appeared too sophisticated or elite. They were no ordinary heroes, they were our heroes.

As far as the citizens of India were concerned, Abdul Kalam had the perfect credentials — he came from a humble background, had studied hard to achieve strong academic credentials, was a simple person with an unimpeachable work ethic who never sought global approval and was proudly Indian. He worked in a missile programme that had a mysterious aura and, in defying global hegemony, made us feel uber nationalist and proud.

Politicians, looking for an astute move, made him the President of India, and he transformed the office to that of a People’s President.

Here was an Indian like you and me, who reached the country’s highest office without compromising on his integrity or values. Here was a politician who was not a Muslim, or Tamil, or a boatman’s son — but an Indian President, who opened his office to all Indians. 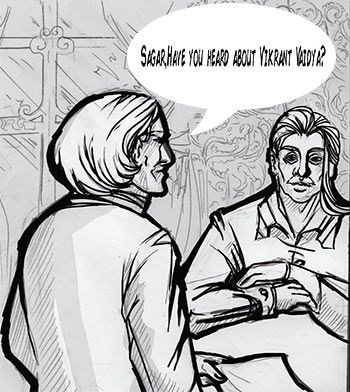 Jawaharlal Nehru loved children but, like the roses that adorned his coats, it stopped there. Not for Kalam — he loved to interact with their minds, igniting them. He was, in a historic linage of a different order, a combination of S Radhakrishnan and Pandit Nehru — a teacher and a favourite with children.

When he spoke at gatherings of engineering college students, management students, software engineers, government employees, politicians and bureaucrats, he was a teacher too. Direct, using questioning methods, he probed and, instead of giving answers, made them find their own.

Middle classes don’t like humans as heroes and soon, upon every hero they adopt, they force a divine attribute.

God bats at No 3 for Indian cricket.

Narayana Murthy invented everything from software outsourcing to offshore development to the software ark campus model.

Jokes inspired by Rajni and quotes about Kalam were legion.

Only, in Kalam’s case, he was truly inspirational and said many of the things we say he did.

There were many questions the liberals raised against him — from what kind of a scientist was he, did he present papers, was he a project manager of applied technology to did his Brahmin values endear him to the BJP under Vajpayee and make him acceptable to the RSS, which made it possible for him to become President?

Most Indians did not care.

He was the original Bajrangi Bhaijaan, acceptable to all, like a reincarnation of Shirdi Sai Baba — a Muslim saint who Hindus worship. Autobiography Of A Mad Nation

I met Dr Kalam when he came to speak to the Satyam employees.

He was not the President then, but people adored Kalam, the scientist. He presented the work done at the DRDO and the Indian missile programme. He floored the house with his unique manner of answering questions. He connected with everyone.

It was a magical feeling.

When I began writing my novel — Autobiography Of A Mad Nation — I needed him.

The plot has a young man wrongly sentenced to death writing to the President, who would respond very warmly, strongly and resolutely. It had to be the People’s President. Thousands of people had told me about the emails they wrote to him, the books they sent him and the advice they had asked for — and how he replied.

Secondly, I needed a President who would break political protocol for the sake of connecting with the common citizen. In my novel, he invites his old friend and now retired CBI chief Dr M Vidyasagar to investigate the merit in the death sentence given to 24-year-old Vikrant Vaidya.

Dr M Vidyasagar was my colleague in real life at Tata Consultancy Services. A globally respected technologist, Dr Vidyasagar would tell us many stories about Dr Kalam. I captured that in my character.

The Wings Will Always Soar

The man, 83-year-old A P J Abdul Kalam, is gone. The icon will remain for a long time.

His books, his quotes, his imagery and personality will continue to have meaning for those who connect with him — school children, people from humble backgrounds, people who hope to rise in life with their own work.

He rescued us from the times when we had our dreams stolen from us, our aspirations rendered nearly impossible. He gave us our dreams back. And dreams, like ideas whose time has come, don’t die.

Sriram Karri, author of Autobiography Of A Mad Nation, pays tribute the man who inspired him to start writing.

PM to inaugurate three-day conference on vigilance, anti-corruption today
We and our partners use cookies on this site to improve our service, perform analytics, personalize advertising, measure advertising performance, and remember website preferences.Ok