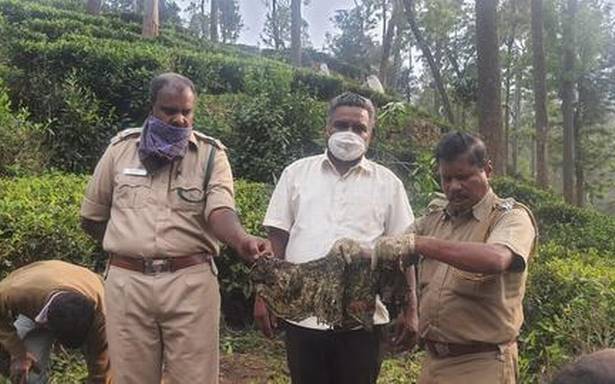 With shrinking grasslands, the animals are venturing into towns in search of food; the ingested garbage could be a contributing factor in their deaths, officials said

Improperly discarded waste could have led to the deaths of at least five Indian gaur in various parts of the Nilgiris since December last year, sources in the Forest Department told The Hindu.

On Friday, an Indian gaur was found dead in Kattabettu Range near Kotagiri. During the post-mortem, it was found that the animal had consumed a plastic bag used to package manure and fertilizer, eventually leading to its death. However, officials with the Forest Department revealed that this was not the only death of Indian gaur resulting from improperly dumped plastic and cloth waste by local residents.

Since December 2021, post-mortems conducted on at least five Indian gaur in Kundah, Kotagiri and Kattabettu, have revealed that the animals had accidentally ingested improperly disposed of waste.

Recently, post-mortems conducted on three gaur in Kattabettu revealed that the animals could have died from ingesting waste they had consumed from trash bins and open dumping grounds in areas surrounding Kotagiri town. When contacted, an official from the Nilgiris forest division said that plastic bags, nylon ropes and noodle packets were found in the stomach of the animals during the post-mortem. “It would be premature to state that ingesting these items led to the deaths of the animals, but they could be a possible cause. However, that can only be ascertained once the post-mortem report is submitted to the department,” said the official.

Similarly, in the Kundah range, officials said that a gaur had consumed an entire saree that had been thrown into a trash heap, while bits of clothing have also been found in the stomachs of other gaur found dead in the Nilgiris.

“The Nilgiris has lost a huge proportion of its grasslands over the last 50-60 years to plantations and development. As a result, Indian gaur are venturing into towns in search of food. This is a very complex issue, that will take many decades to solve, and that too, only if habitats are restored. As for littering leading to the deaths of these animals, the district administration is taking all steps to ensure that visitors and residents do not improperly dispose of their waste,” said a top Tamil Nadu Forest Department official who requested anonymity.