In a Hindu Bengali settlement of migrants just outside Silchar city, many residents failed to figure in the final NRC. "Why are we getting involved in this mess? We are Hindus,” says a resident. Minutes after the National Register of Citizens (NRC) was published on August 31, Ramakanta Biswas ran across the road from his mithai shop to the computer shop. In Chotodudhpatil, a “100 per cent Hindu Bengali” village on the outskirts of Silchar in Assam’s Cachar district, many others milled around the shop. The nearest NRC Seva Kendra (NSK) was quite a distance away, and even involved a short, but slow, boat ride.

Ramakanta did not have time for that. In 2018, a three-year-long case had culminated in their favour — when Ramakanta, his brother Khitish, and their mother Basanti had successfully been able to prove their Indianness in a Foreigners’ Tribunal after years of being marked as D-Voters, or Doubtful Voters. The NRC, a register of bonafide citizens of India, now would be the final stamp of approval for the family — a certificate that they were indeed legal residents of this land.

But that morning, to Ramakanta’s shock, not only were he and Khitish out of the NRC, so was his youngest brother Lakhikanta. Only Basanti and another brother, Kalikanta, had made it.

“We thought India was safe. But what safety is this?” Ramakanta says, angrily. It is a day after the NRC authorities announced that over 19 lakh had failed to make it to the list.

As dusk falls at Chotodudhpatil, its residents gather at the Ramakanta’s mithai shop as is their daily evening ritual. Fifty-year-old Bidhan Shankar, whose wife and mother are out, says “I know Assam has a migration problem but why are we getting involved in this mess? We are Hindus.” 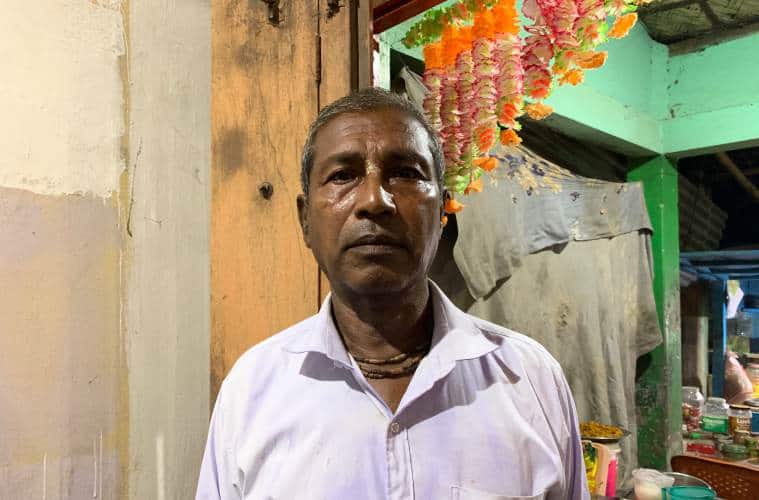 While Ramakanta and his brothers were all born in Chotodudhpatil, their father had crossed over the border from Bangladesh (then East Pakistan) “to make a life in India” in 1956. Basanti, their mother, had crossed over with her family even before that. Over the years, many Biswas family members have tried to make this journey — aunts, uncles and cousins — to “flee the terrible things that were happening in Bangladesh.” Some have made it, some have not. Now Ramakanta says he has family spread over Jagannathpur in Sylhet district of Bangladesh — family he has never met in his life.

This kind of historical baggage is not unique to the Biswas family alone. Around them in Cachar district’s Chotodudhpatil, there are scores of migrants who have migrated to South Assam’s Barak Valley (comprising three districts of Cachar, Karimganj and Hailakandi) since Partition.

“There are cases where children have left parents behind, brothers have left sisters. We all came to India seeking protection — before 1971,” says Uppal Pal, a shopkeeper. “Yet, here almost every other household has someone out of the NRC. How is this fair? Wasn’t the BJP supposed to save us?” The BJP, for their part, has wasted no time in denouncing the citizen’s register.

“Right now I have a family in front of me who have land documents of 1959. Seven members are out, only the daughter is in. Tell me, is this not a fallacy?” asks BJP MP Rajdip Roy of Silchar. “We need a re-verification and we will not accept this NRC till it’s done.” Roy also said his party  would bring the Citizenship (Amendment) Bill, which seeks to grant citizenship to non-Muslim migrants, “come what may.” “The CAB will come, and these families will be safe,” he says.

However, across the Cachar district, which has a dominant Hindu Bengali population, these words fail to find an echo. “The Bill has come, and gone,” says Shantanu Sutradhar of the All Assam Bengali Hindu Association (AABHA), “Is there a guarantee it will come again?”

Silchar-based Sutradhar did not find his name in the July 30 draft NRC. “But my name figured this time. My father served as district judge and then even as a judge in the Foreigners’ Tribunal. It would have been quite a joke if his son name was out.”

AABHA members feel that no Hindu can be a “bideshi”. “They all came here for refuge,” says a member.

Like 76-year-old Narayan Das of Chotodudhpatil who was visiting in 1963. “I had come from Sylhet to visit family but then I heard that some violence had taken place in my hometown. So I did not return.” Narayan spent the subsequent years working as a security guard at the Agricultural Department in Silchar. Yet his name does not figure in the NRC.

For people like Narayan, the next step is to go to Foreigners’ Tribunals. While the state government has reiterated their intention of providing financial help to the needy, many doubt that it will actually happen. “Fine, we will go and fight a case again — I have enough practise anyway. But what about the money? What about the ‘up-down’ we will have to do again? Travel for a recent hearing cost me Rs 6,000” says Ramakanta, sitting at his shop.

His Maan Mistaan Bhandaar— opened 20 years back — is the only big shop in the vicinity. The lack of development in Chotodudhpatil is conspicuous — roads are virtually non-existent, the floods come with a menacing fury every year and it is only on very rare days that one can find a doctor in the only hospital. “Makaan baanaya but doctor nahi bheja,” comments a villager, as people around him laugh. “They made a building but didn’t send a doctor.” While those are difficulties the villagers know how to work around, for many, the NRC problem has just begun.

On Sunday evening, a frail-looking Namita Das roams around the Chotodudhpatil with a bag of documents asking people what the next step is. The 50-year-old gets by begging, and has a disabled son to look after. “Would you like to take my fingerprints? Will that help?” she asks, holding up her hands.

Hunger a constant companion for those left without work or income
We and our partners use cookies on this site to improve our service, perform analytics, personalize advertising, measure advertising performance, and remember website preferences.Ok