The significance of the Prime Minister turning to Jaishankar, after the exit of Sushma Swaraj, is not lost on anyone. He is the first former Foreign Secretary to become a Cabinet minister, that too for the prestigious Raisina Hill portfolio. Sixteen months after he retired and left the office of Foreign Secretary in South Block to lead a private life, Subrahmanyam Jaishankar returned Friday to assume charge as the new External Affairs Minister. The offices of both, incidentally, are located on the first floor of South Block.

The significance of the Prime Minister turning to Jaishankar, after the exit of Sushma Swaraj, is not lost on anyone. He is the first former Foreign Secretary to become a Cabinet minister, that too for the prestigious Raisina Hill portfolio.

While K Natwar Singh, a career diplomat for 30 years, also became Foreign Minister two decades after quitting the Indian Foreign Service, he had joined the Congress whereas Jaishankar has not taken the political route and is a lateral entry, in letter and spirit.

As an insider till over a year ago — unlike Natwar Singh who quit in 1984 as a Secretary in the MEA and became a Minister in 2004 — Jaishankar knows the system too well. While that is an asset, it also means that he knows the weaknesses in personnel and the systems, and resolving these issues will pose a challenge. Soon after taking charge around 4 pm Friday, he met Secretaries of the Ministry of External Affairs, including Foreign Secretary Vijay Gokhale, before heading to the first meeting of the new Cabinet.

“He has been out of the system for barely 16 months, unlike Natwar Singh who became a minister after a gap of 20 years. He knows what is happening and is in the public domain. All he needs is a briefing on the classified conversations in the last 16 months, since he left the Foreign Secretary’s job,” a diplomat told The Indian Express.

Explained | What are the opportunities and challenges for the new Minister of External Affairs?

He is likely to be briefed next week by all heads of divisions, mainly the Joint Secretaries in charge of key territorial (like US, Pakistan, China etc) and functional (nuclear issues, UN affairs etc) matters.

For much too long, the writ of the Prime Minister’s Office in matters of key foreign policy questions has dominated, and Jaishankar’s entry, Indian diplomats hope, will bring heft to the new office. The new work dynamics between him, Foreign Secretary Gokhale and NSA Doval will be put to test.

Key to Jaishankar’s success will be how the establishment responds and adapts to this new appointment, since it is unprecedented and uncharted territory. So far, diplomats advised ministers on the diplomatic options available, but this will probably be the first time that a minister will be tempted to advise diplomats.

A career diplomat from the 1977 batch, who has seen and worked with ideologically diverse governments — from the Janata to the United Front, from Congress to the BJP — Jaishankar made seamless transitions with diplomatic finesse as governments changed. He is the first “non-political” External Affairs Minister, with no constituency to pander to. While that insulates him from the public, what his predecessor did — by tweeting grievances of the people, be it passports or Indians overseas in distress, and making the MEA more citizen-friendly — will be a new area of challenge even for a seasoned bureaucrat like him. 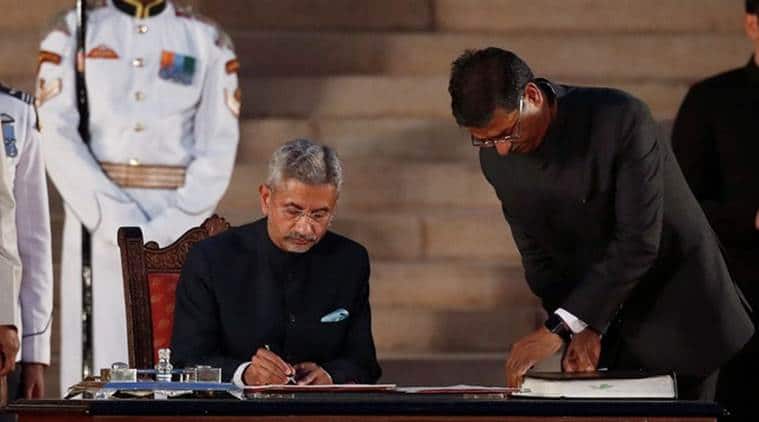 As India’s envoy in Beijing, Jaishankar first interacted with Modi during his visit to China as Gujarat Chief Minister in November 2011. A few years later, when he was Ambassador in the US, Modi made his first visit to the country as Prime Minister in September 2014, arriving to a rockstar welcome by the diaspora at the Madison Square Garden.

In January 2015, he was handpicked by Modi for the post of Foreign Secretary, and replaced Sujatha Singh who was removed six months before the end of her term.

After he became Foreign Secretary for a two-year term, Jaishankar shaped policies in line with Modi’s idea of an aspirational and assertive India, amid turbulence in the neighbourhood and global shifts in power. Clearly, he was in sync with Modi’s idea of leveraging India’s power to its advantage.

Jaishankar, who understands the US better than many Indian diplomats, navigated the transition from the Obama administration to the Trump administration, and enhanced the close strategic partnership with the US. He was, in fact, the early negotiators of the Indo-US nuclear deal and as Joint Secretary (Americas) in the MEA, he was regarded quite highly by Prime Minister Manmohan Singh as he started negotiations on the historic Indo-US nuclear deal and laid the foundation of a strong relationship.

His successor Vijay Keshav Gokhale had to pick up the threads from where he left in January 2018, and the fruits of that relationship was seen in recent months, especially post the Pulwama terror attack when the US supported India’s right to self-defence and did heavy-lifting for the listing of Jaish-e-Mohammed chief Masood Azhar as a UN-proscribed terrorist.

Gokhale, in tandem with Jaishankar, also negotiated with China during the Doklam border standoff, and the seeds of the informal summit in Wuhan, a tactical exercise, were sown during Jaishankar’s stint itself.

As part of Modi’s core team from 2015 to 2018, Jaishankar had a good working relationship with Doval. By the time he left the foreign service in 2018 after serving as India’s envoy to China, US and Singapore, and holding a range of diplomatic postings over three decades, he had built a formidable reputation as a hard negotiator.

As External Affairs Minister, he brings this skill set to the table, and also his vast diplomatic network across the world. An Indian diplomat, who worked with him for several years, told The Indian Express, “Dr Jaishankar’s phonebook is the envy of almost every diplomat.”