A day after the Congress released its manifesto for Chhattisgarh, the incumbent Bharatiya Janata Party came up with several schemes and promises of a “Naxal free” and “Naya Chhattisgarh” to woo the voters ahead of the assembly polls in the state. The first phase of voting in security-sensitive zone of Chhattisgarh will take place on November 12 where polling will take place for 18 assembly seats. 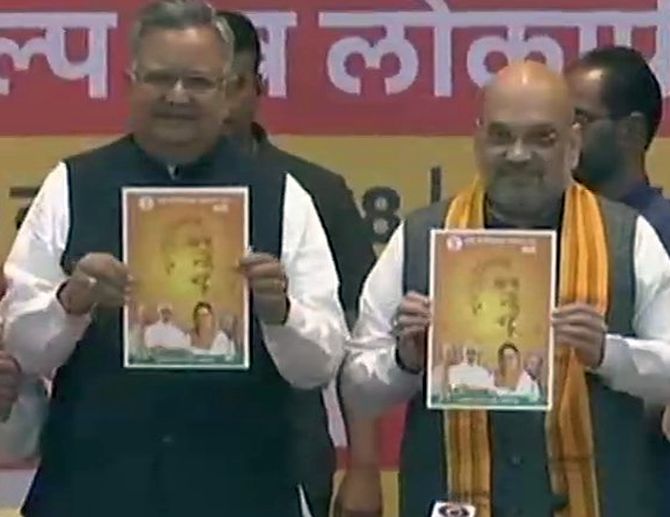 While releasing the manifesto, BJP national president Amit Shah asserted that the last 15 years rule of the BJP is a model of an ideal state. “Raman Singh government has successfully tried to contain the Naxal and made the state an education hub. This manifesto is for Naya Chhattisgarh,” Amit Shah said.

Talking about the developments in the state, Shah said that the use of information technology has helped reduce leakages in the Public Distribution System.

He lauded the ‘Kaushal Unayan’ scheme for tribal employment and said that under MNREGA scheme, Chhattisgarh gave 150 days of work to the people and mentioned that the state is providing rice at the rate of Re 1 per kilogram and free salt to the people.

“After Modiji became prime minister, he has done a lot for the state, particularly for the tribal people. Van Dhan, Jan Dhan, Govardhan schemes have been launched by Prime Minister Modi from the land of Chattisgarh itself. Chhattisgarh is the first state to set up livelihood colleges in each district. Rs 500 bonus for paddy has been given to the farmers by Raman Singh government. He has provided health insurance,” he said.

“The work of the BJP government in Chhattisgarh with a comparative study should be shown to the public. I can mention several such achievements. In every field 10 times growth has been shown by the government. Raman Singh has broken all record in terms of growth. I believe Raman Singh will again serve the state for the fourth term,” Shah said.

He attacked the Congress for not doing enough for the people despite ruling the country for 55 years. “When they were in the government they did nothing but gave only statements. I think the kind of work and schemes that we brought for the farmers are unprecedented,” Shah said.

Speaking on the occasion, Chhattisgarh Chief Minister Raman Singh accused the Congress party of using farmers as a vote bank. “Congress manifesto is a manifesto of lies and falsehoods. Lofty promises made by the Congress are just for winning elections and they are hollow. Congress did not give benefits to the farmers. No action was taken on Swaminathan report during the United Progressive Alliance rule,” he alleged.

Talking about the manifesto, Chief Minister Raman Singh said that the free salt yojana will continue and small and landless farmers over the age of 60 years will get Rs 1,000 as pension.

He mentioned that the minimum support price will be raised by 1.5 times to increase the income of farmers and promised to proper home for all by 2022.

Raman Singh also promised super-specialty hospitals in Ambikapuram and Jagdalpur and to provide Rs 1 lakh for UHS insurance. He also promised a film city in Chhattisgarh and to develop the cluster of Raipur, Atal Nagar, Bhilai, Durg and Rajnandgaon as the state capital region. He also promised protection laws for journalists and advocates and announced a photo journalist welfare board.

He also mentioned having special schools for the Hindi and Chhattisgarh languages, free education and scooties for the meritorious students and free bicycles for students taking admission in Class 9th standards onwards in order to increase retention in senior secondary schools and promote higher education.

In its manifesto, the BJP has promised two lakh pump connections to the farmers in next five years; scholarship schemes for students belonging to Scheduled Castes and Scheduled Tribes; concrete houses for urban poor and rural families; unemployment allowance for the unemployed youth; Rs 1,000 medical allowance for pensioners, Rs 1 lakh medical insurance cover for poor families; Rs 5 lakh insurance cover for the small traders; construction of residential flats for administrative staff in all block headquarters; developing the state as prominent tourist destination; and having a micro-blogging site to bring entire Chhattisgarh diaspora together.

Unemployed H-1B workers seek more time to stay in US

As Russia braces for coronavirus, Putin lets underlings take the heat
We and our partners use cookies on this site to improve our service, perform analytics, personalize advertising, measure advertising performance, and remember website preferences.Ok