The ‘mushroom-preneurs’ of Nagaland find an easy add-on income in growing speciality fungi that fetch a high price. 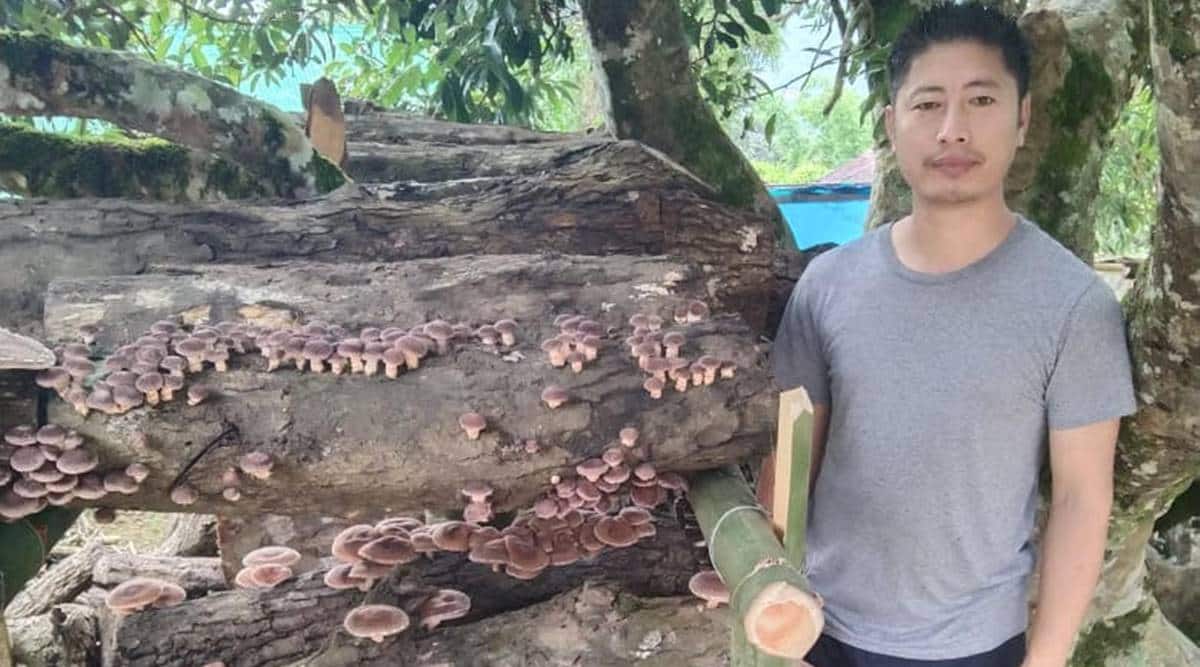 When the fruiting began in August — enormous clusters sprouting on a log — Temjen Wati was delighted. “We cut it, washed it and tipped it right into our evening chicken stew. It was delicious,” recalls Wati. It had been a long lockdown, and the mess manager of a private college in Nagaland’s Mokokchung district had spent most of his summer tending to what looked like a clump of tree logs in his garden. After the initial labour, there was not much to do but that did not stop Wati from fussing over the prized possessions – a batch of exotic shiitake mushrooms, in different shapes, sizes and shades.

The 45-year-old has harvested nearly 15 kg since August. “Enough to eat, and enough to sell too. It is a good income to have, especially in times like these,” says Wati, “Before this, I didn’t even know that something called Shiitake mushroom existed.”

Nor did a theology professor in Impur, a businesswoman in Dimapur, and members of a womens’ Self Help Group (SHG) in Aliba. Yet, they, and hundreds of others, have been spawning, harvesting, eating and selling kilograms and kilograms of the delicacy since the lockdown. 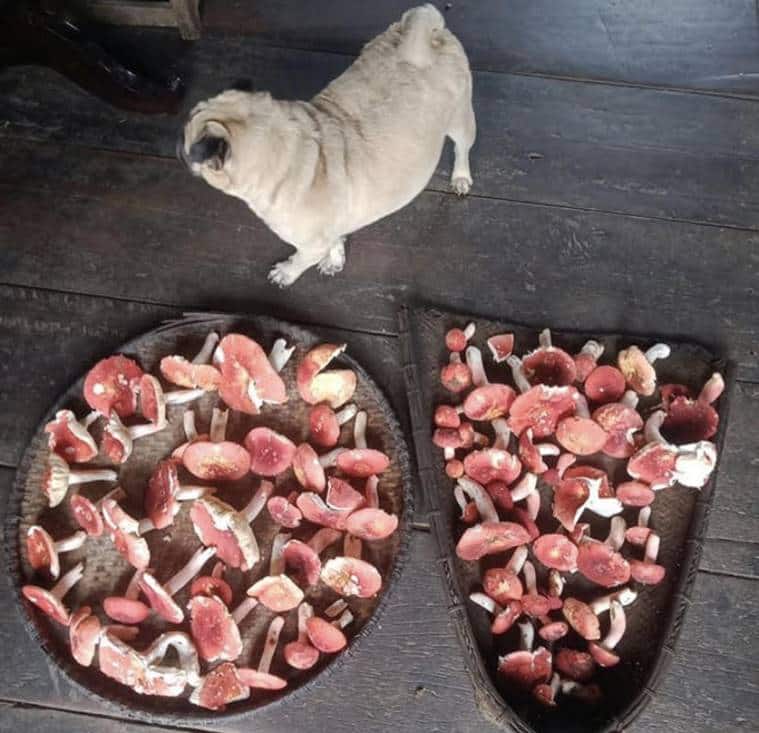 There is a quiet proliferation of the Shiitake mushroom — an edible, nutrition-rich mushroom mostly grown in Japan and China — in the northeastern state of Nagaland.

In the beginning of 2018, Dr Sosang Longkumer, a young scientist brought years of research in the fields of microbiology and applied genetics to his small mushroom spawn production laboratory in Dimapur. After months of experimentation, consultations with experts, references to research papers, the first fruit spawned in October 2019.

Cut to October 2020, 37-year-old Longkumer has trained approximately 500 farmers in Shiitake and Oyster mushroom cultivation, and his team at his start-up, Konger Agritech, has made about 15,00,000 Shiitake dowel spawns and 10,000 kg of Oyster mushroom spawns.

The potential of Longkumer’s project has not gone unnoticed. When the Nagaland State Rural Livelihood Mission (NSRLM) announced its ‘Roadmap for Economic Development- Post COVID-19 Pandemic’ recently, mushroom cultivation was very much part of the plan. “We are in talks to get SHGs involved in three districts — Wokha, Mokokchung and Dimapur — about mushroom cultivation, with Dr Longkumer’s support,” says Imtimenla, Mission Director, NSRLM, “The climatic conditions in Nagaland are great for Shiitake — this will surely benefit the local farmers.” 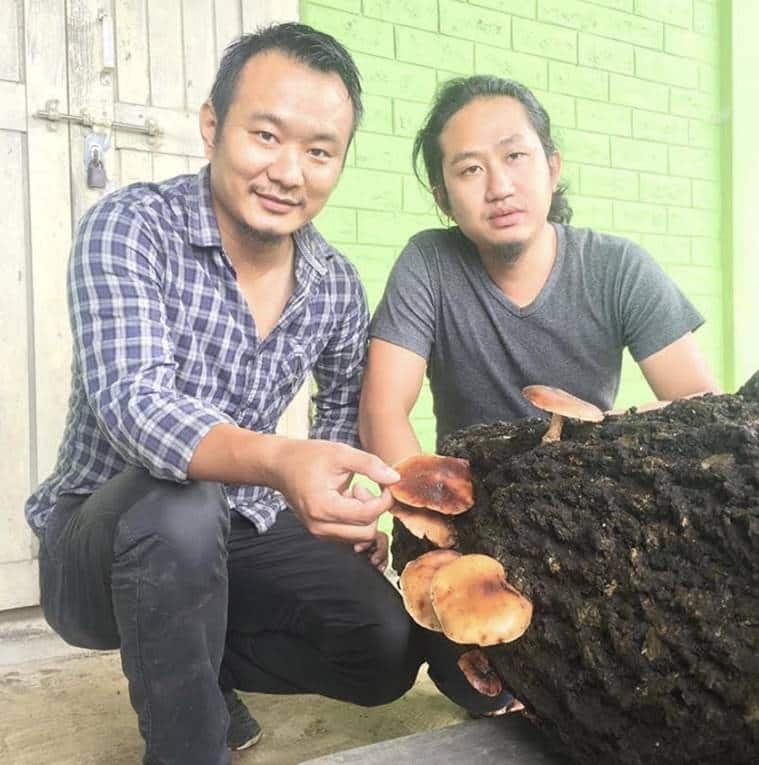 In Aliba village, Shiitake mushrooms have saved the day for eight women of a local SHG. “During the lockdown, there was no special food, and this is what came to the rescue,” says Atila Pongen, the 41-year-old president of the Pangjemer SHG. Earlier the group would cultivate tomatoes and potatoes, but ever since they trained under Longkumer and started shiitake cultivation, the fortunes have turned, “Since August, we have harvested 38.5 kg, sold it at Rs 600 per kg — and earned nearly Rs 23,000,” she says.

Similar success stories can be found in other parts of Nagaland, especially during the lockdown. “My aim is not only to spawn and grow mushrooms but to encourage a breed of entrepreneurs who can collectively contribute in building the economy of the state through farming,” says Longkumer. He’s calling them ‘Mushroom-preneurs’.

According to Longkumer, while demand for shiitake is high (especially because of its medicinal properties known to fight cancer, diabetes etc) in India, production is relatively low — many done in laboratories using synthetic sawdust logs as a medium in temperature-controlled rooms. “Of course, fruiting happens much faster via this method but the medicinal value of the mushroom is ten times less,” he says.

On the other hand, Nagaland, with its hills, natural resources and suitable climatic conditions are optimal for natural shiitake. “The forests here are dominated by hardwood, like oak, alder, chestnut etc. And that is the ideal medium for Shiitake to grow in,” says Longkumer, adding that the farmers use a method of tree “pollarding” — or pruning/cutting the branches in a certain way — so as to not harm the tree. 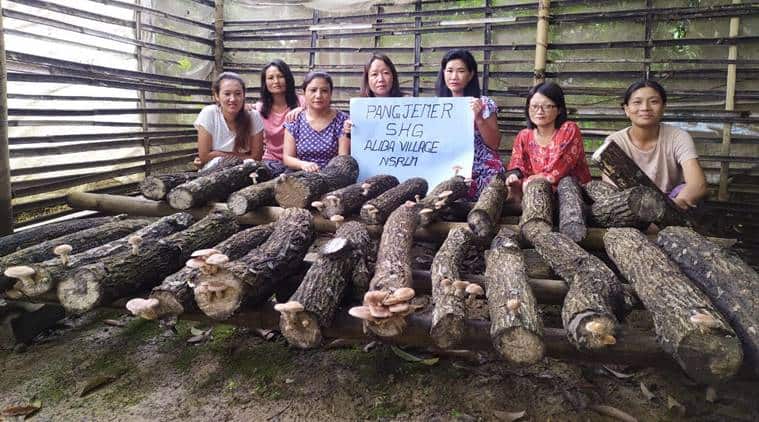 For Longkumer, more than the scientific hurdles in spawning, the real challenge lay outside the laboratory. “How do you convince farmers to grow it — especially when many don’t know what it is?” he asks. The scientist first encouraged farmers to try with small amounts. “That way, even if it did not work, the loss would not have been huge.”

Lanu Imchen, a 42-year-old theology professor based in Impur, Mokokchung district, was one of the first to trust Longkumer and give it a shot. “We went for a few training sessions by Dr Longkumer — no one was really sure in the beginning but he told us to trust him. After the initial labour, there is not much to do: and suddenly, they began fruiting,” he says, “It was really rewarding.”

To keep the farmers engaged, Longkumer has also offered a buyback policy — Rs 500 per kg of produce. “Usually, they aren’t offered this option, so for them, it was a win-win,” says Longkumer.

While the government uses him as a resource person, Longkumer has made it his personal mission to train private entrepreneurs and farmers — hand-holding them through the process, right from the inoculation to the harvesting, at times through Whatsapp video calls too.

And the trend is catching on — in Dimapur, Lhuvevolu A Rakho, a 34-year-old owner of an apparel boutique, has started a side business in Shiitake mushroom. “I first saw this as an opportunity to grow my own food since I love gardening anyway, but when some people told me that they wanted to buy from me on a regular basis, I decided to start cultivating,” says the entrepreneur.

And that according to Longkumer is the beauty of it. “Anyone can do it — an office-goer or a farmer,” he says, “Mushrooms low investment, high return, and well, packed with nutrients.”