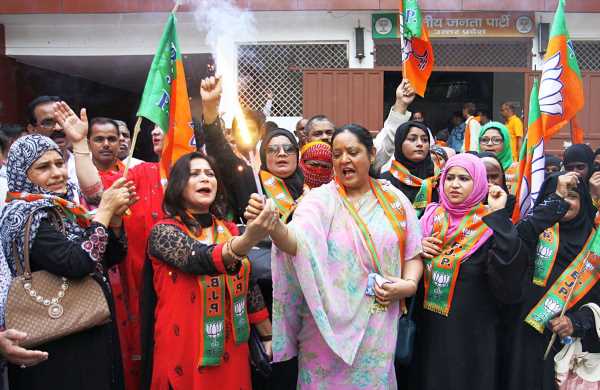 ‘BJP has now risen to second spot, ahead of the BSP, as the political party of choice for Muslims in UP.’

The Bharatiya Janata Party has made inroads into the Dalits and Other Backward Classes, which hitherto formed the core constituencies of the Bahujan Samaj Party and Samajwadi Party, respectively.

Now the BJP is looking to woo the Muslims in Uttar Pradesh ahead of the 2024 Lok Sabha polls.

“The minorities are gradually transcending community lines and instead voting for such a candidate who is seen to fulfil their needs and aspirations,” Basit Ali, chairman, UP BJP minority wing, tells Virendra Singh Rawat/Business Standard in an exclusive interview.

There are talks about an increasing Muslim outreach by the BJP in UP. Could you elaborate?

There are nearly 40 million Muslim beneficiaries of various government schemes in UP.

The BJP minority wing will proactively reach out to the community to explain that the government has facilitated these benefits without any discrimination.

The Opposition parties had treated the Muslims only as a vote bank.

Only the BJP government has worked tirelessly to usher in the minorities to the mainstream of society.

The community is now beginning to warm up to the party.

Is there any shift in the voting pattern of the Muslims in UP over the past few elections?

In the 2022 UP elections, there have been assembly segments where the SP and the BJP had fielded candidates from the majority community, while the BSP and the Congress nominated Muslim candidates.

However, the minority community voted for the Hindu candidates rather than going strictly by faith consideration.

This indicates that the minorities are gradually transcending the community lines and instead voting for such a candidate who is seen to fulfil their needs and aspirations.

Interestingly, the BJP has now risen to second spot, ahead of the BSP, as the political party of choice for Muslims in UP. This is a significant shift indeed.

The BJP won the Lok Sabha bypolls in Azamgarh and Rampur, upending the SP from its traditional pocket boroughs. Is the BJP already reaping the electoral dividend of its Muslim outreach?

The BJP garnered nearly 24 per cent of the Muslim vote in the two seats.

Although the bypolls are not big-ticket elections, they clearly showed the trend in our favour.

The fact is although the Muslims constitute about 18 per cent of UP’s population, their share among the beneficiaries’ pool is 30-33 per cent.

In contrast, the beneficiaries’ percentage was only between 4.5 and 9 per cent during SP rule.

The marked shift could be possible only due to the non-partisan approach of the Narendra Modi and Yogi Adityanath governments at the Centre and the state, respectively.

Prime Minister Narendra Modi recently called upon the party organisation to work for the uplift of Pasmanda Muslims, who constitute nearly 75 per cent of the community in UP. How is the party charting its course in this regard?

Although the number of beneficiaries of government schemes in the Pasmanda community is nearly 40 million, only a small percentage of this segment is known to support the BJP during elections.

In fact, the economically and socially well-off sections among the Muslims are more likely to exhibit allegiance towards the party than the Pasmanda (which in Persian means ‘left behind’).

Since the majority of Pasmanda households lack access to education and are still economically vulnerable, they primarily align with such parties that stoke fear among the community.

Therefore, it would be an onerous responsibility of the UP BJP minority wing to reach out to the Pasmanda Muslims to create awareness about their rights and also to communicate the commendable work being done by the ‘double engine’ dispensation at the Centre and UP.

There are a few contentious issues such as instant talaq, population control, and the use of bulldozers by the Yogi government. These are routinely raised by the Opposition parties to target the BJP. How will you counter such narratives?

We will reach out to the instant talaq victims, start a dialogue with the beneficiaries of government schemes, and hold local meetings and interactive sessions in constituencies that have a sizeable Muslim population.

Besides, we will involve the Muslim intelligentsia to foster an amenable outreach to the community at large.

The statistics reveal the reproductive rate among the Muslims is declining.

This shows the minority community acknowledges that a small family translates into better education and good living standards for their children.