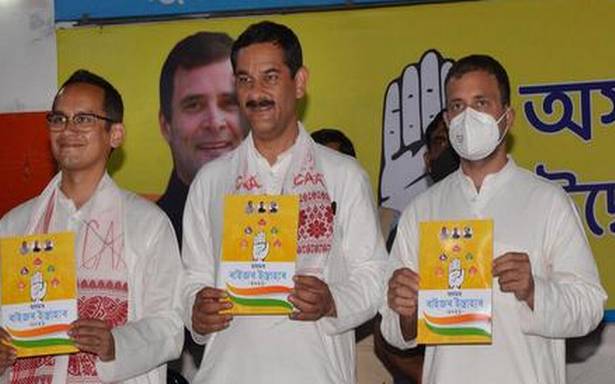 In what appears to a re-run of recent developments in Little Andaman Island (A bullet through an island’s heart, The Hindu, February 1), more than 150 sq. km. of land is being made available for Phase I of a NITI Aayog-piloted ‘holistic’ and ‘sustainable’ vision for Great Nicobar Island, the southernmost in the Andaman and Nicobar group.

American Secretary of Defense General (Retd.) Lloyd James Austin III addressed the issue of human rights in India during his meetings with Cabinet Ministers here on Saturday. An informed source said the issue also came up during his conversation with External Affairs Minister S. Jaishankar which also covered a broad range of topics like the situation in Afghanistan and the West Asian tension.

Days after being shunted out from the post of Mumbai Police Commissioner, Param Bir Singh has alleged that Maharashtra Home Minister Anil Deshmukh had demanded ₹100 crore every month from suspended police officer Sachin Vaze, now in custody of National Investigation Agency (NIA) in the Antilia bomb scare case.

Waiving off the debts of farmers and beginning the process of identification of illegal immigrants topped the list of promises in the Congress manifesto that former party president Rahul Gandhi released in Guwahati on Saturday.

The Hindu Profiles | On Yang Jiechi and Vignesh Sundareshan

While the the Politburo member earned praise at home for his blunt comments in Alaska, the India-born blockchain entrepreneur has bought a digital artwork for $69 mn.

Former Union Minister and Congress Working Committee (CWC) member Chinta Mohan on Saturday said that the Congress Party was committed to making Tirupati the capital of the State if elected to power.

The Women and Child Development Ministry plans to seek loans totalling ₹37,179 crore from five different multinational development banks to implement new and existing schemes, including a research centre on child development as well as plantation of 200 million trees under mission Kalpatru to eradicate malnutrition.

Opposition members of the Parliamentary Standing Committee on Food, Consumer Affairs and Public Distribution say they were not consulted before the adoption of a report calling for the implementation of the Essential Commodities Amendment (ECA) Act. Protesting farm unions calling for the repeal of the law have slammed parties who were part of the committee for “betraying farmers”.

Coronavirus | Should Covaxin trial continue till 130 cases are recorded?

The challenge will be in continuing the trial with 25,800 participants till 130 cases are reported when there is a surge in many States

A pile of drain pipes surrounded by farmlands reaping a good potato harvest is all that remains on the 997-acre plot in Singur where the Tata Motors’ Nano factory once stood.