‘But in 2024, the people of India will throw him out of power as the contradictions in him will be apparent.’ Hardik shot to fame as convenor of the Patidar Anamat Andolan Samiti, spearheading the pro-quota stir seeking reservation in jobs and higher education on par with that given to Other Backward Classes in Gujarat.

With his induction, will the Grand Old Party boost its electoral chances?

Can Hardik sway the Patidar community — which makes up 15 to 18 per cent share of Gujarat’s population — to the Congress’s side?

Vidyut Joshi, former vice-chancellor, Bhavnagar University and former director of the Centre for Social Studies, Surat, tells Syed Firdaus Ashraf/Rediff.com how Gujarat politics is likely to be impacted by Hardik’s entry, and what could be the outcome of the 2019 polls.

Will the Congress get a boost with Hardik Patel joining the party?

Yes. When Hardik started his political work, he worked only for the Patidar samaj (Patel community), but later added farmers to his support base. He also worked for the downtrodden people.

Now, he has taken the path of Kanhaiya Kumar and Jignesh Mevani. He is learning from them. He has the leadership characteristic in him.

Hardik Patel is likely to emerge as a pro-people leader.

Many Patidars are aligned with the BJP. Hardik could not stop the BJP from winning the Gujarat assembly election in 2017.

Among Patidars, there are two kinds. Those who have established businesses are with the Bharatiya Janata Party and those who are poor and are in agriculture and small jobs are with Hardik.

In the 2014 Lok Sabha election, the Congress could not win a single seat in Gujarat. Will it be the same story in this year’s election or will it improve its tally?

I think the Congress will win at least six-seven seats in Gujarat.

What is the reason for that?

The BJP is not doing well among certain sections.

BJP candidates are not doing well in North Gujarat and also in Amreli. There are certain segments in Gujarat where the BJP is likely to be defeated.

Do Gujaratis have an inherent pride because one of them is the prime minister of India?

This was never a case for the Gujaratis. Gujaratis are the least regional community in India. They say 40 per cent of Gujarati investment is out of their own state.

Gujaratis cannot afford to be regionally chauvinist. They have business interests in Bengaluru, the north east.

I am sure there is an emotional connect with PM Modi among Gujarati voters.

The emotional connect that they have with PM Modi is that he is non-corrupt and is focused on development.

PM Modi is a charismatic leader who appeals to youngsters, like the pied piper. He emotionally connects to people.

What magic does he cast on the people?

She was the antithesis of the old Congress. Poor and tribal people connected with Indira.

She became a charismatic leader later on in her life, and the same thing has happened to PM Modi.

People of India are emotionally connected to PM Modi.

He possesses the image of being the antithesis of Congress and the people have an image that he is not corrupt. So, he connects big time with young people.

But what do you think PM Modi has achieved as prime minister in his tenure that you expect the BJP to win 20 out of 26 seats in Gujarat?

The Congress has no organisation of its own. There was a time when even a pole used to get elected on the Congress ticket.

In 1980, Indira Gandhi derecognised the Seva Dal and then the new entry of people stopped in Congress. By 1995, the Congress became a party only of leaders.

Why she did do that?

She was an autocrat and after she lost post-Emergency, she discontinued the Seva Dal of the Congress. 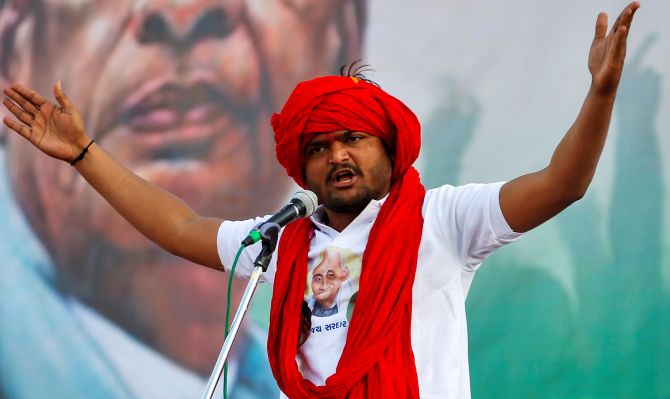 Considering this, do you still believe Hardik will win from Jamnagar on a Congress ticket?

Hardik will win his individual seat because youngsters are with Hardik.

Jignesh Mevani, the MLA from Vadnagar, too won because youngsters are with him. So, I feel Hardik is likely to win his own seat.

At this moment, five Congress MLAs in Gujarat have dumped the party and joined the BJP.

The Congress has no organisation. In Gujarat it took small leaders who have individually risen. They were like feudal lords.

For example, Jawahar Chavda, the MLA from Mangrol, who rose individually on his own strength because of his father’s work, won the seat because of his own organisation and not the Congress.

They know that even if they are not with the Congress, they have their own bastions and organisations.

They are like satraps and as the Congress organisation is weak they have their own personal organisation as a result of which they win. So it does not matter to them which party they are in.

It is not a good sign for the Congress as it is not recovering in Gujarat.

It is not recovering that well. The basic issue of the Congress is not solved. Where are the youngsters who will work as booth-level workers? They do not have a presence.

And as a sociologist, what do you think will be the outcome of the 2019 election?

PM Modi will win with a lesser majority in 2019. But in 2024, the people of India will throw him out of power as the contradictions in him will be apparent.