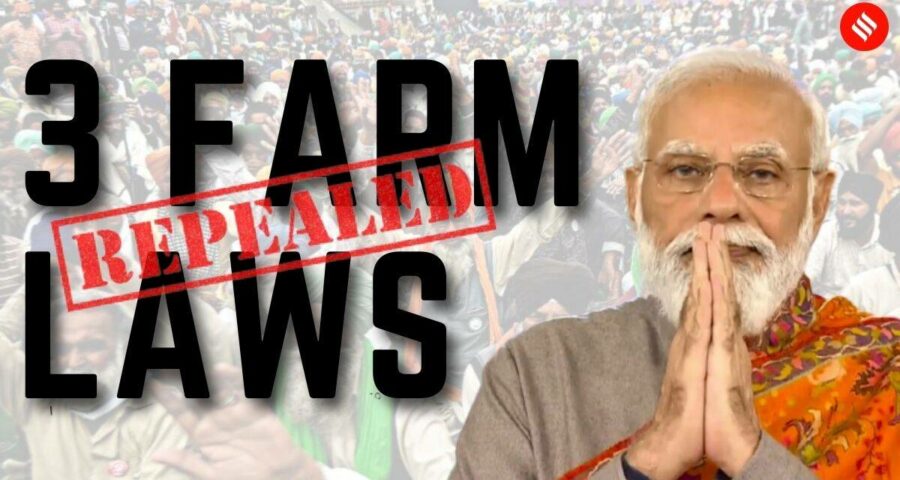 Prime Minister Narendra Modi Friday announced that his government would repeal the three farm laws passed by Parliament a year ago, which has led to massive protests by farmers in several states. 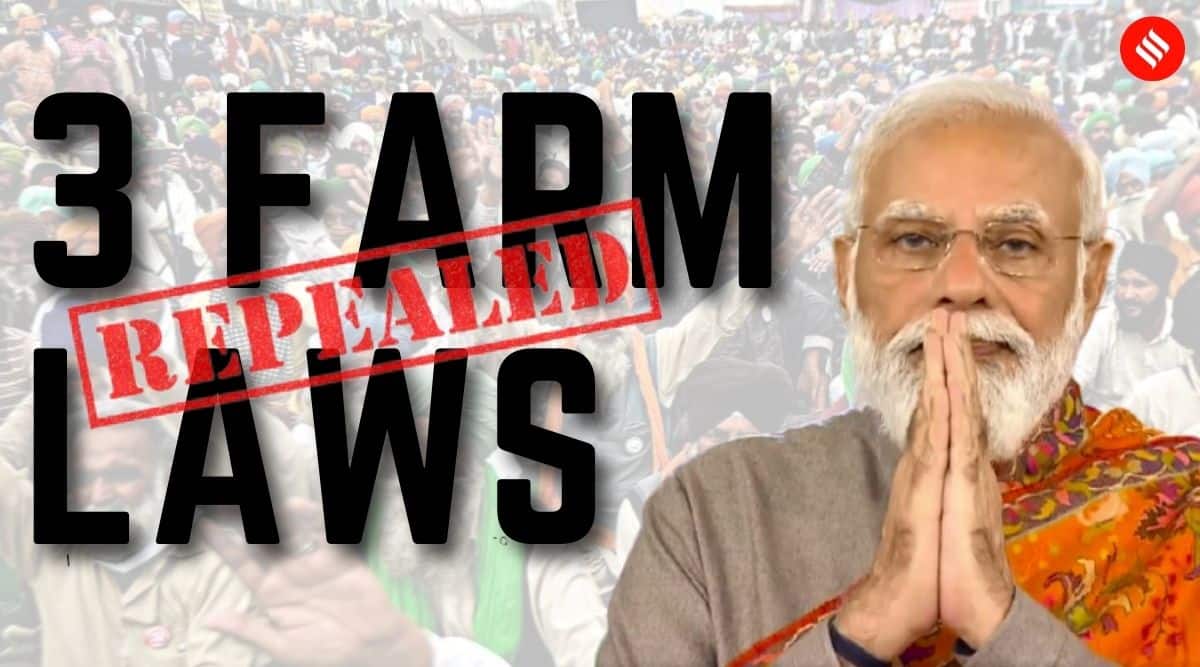 Prime Minister Narendra Modi Friday announced that his government would repeal the three farm laws passed by Parliament a year ago, which has led to massive protests by farmers unions in several states.

In an address to the nation on Guru Nanak Jayanti, PM Modi said, “We worked to provide farmers with seeds at reasonable rates and facilities like micro-irrigation, 22 crore soil health cards. Such factors have contributed to increased agricultural production. However, we failed to make them understand about the benefits of the new laws and as such, we have decided to roll them back.”

Farmers from Punjab, Haryana, Uttar Pradesh and other states have been camping at Delhi’s borders since November 2020 in protest against the three legislations, the Farmers’ Produce Trade and Commerce (Promotion and Facilitation) Act, 2020, Essential Commodities (Amendment) Act, 2020, and Farmers (Empowerment and Protection) Agreement on Price Assurance and Farm Services Act, 2020. The protests have continued for over a year as deliberations between the government and farmers unions failed.

The last time the Prime Minister addressed the nation was right after India scripted history by becoming only the second country after China to reach the one billion Covid-19 vaccinations milestone mark in October.

I thank the Prime Minister for this decision. It is better to be late than never. But, Haryana government must compensate the families of all those farmers who lost their lives during this agitation. CLP had been on forefront and had given financial assistance of Rs 2 lakh each to the families of farmers from Haryana who lost their lives in this struggle. It is time for Haryana government now to not only financially compensate such families, but also give government jobs to their kin, said Congress leader Bhupinder Hooda.

Punjab Agriculture minister Randeep Singh Nabha said, “I, as agriculture minister of Punjab, welcome the decision of the Union government to repeal the three black laws. I thank Prime Minister Narender Modi who listened to the long outstanding demand of the farmers and took the decision. I also ask the Union Government to compensate the families of farmers who passed away during the protest”.

Welcoming the Centre’s decision of repealing the three contentious farm laws, the Congress, via a tweet in Hindi, celebrated the win of the farmers.

Former Pujab CM Amarinder Singh welcomed the Centre’s decision of rolling back the three farm laws. “Great news! Thankful to PM @narendramodi ji for acceding to the demands of every punjabi & repealing the 3 black laws on the pious occasion of #GuruNanakJayanti. I am sure the central govt will continue to work in tandem for the development of Kisani!” he wrote.

In his address to the nation, PM Modi said the three laws were for the benefit of farmers but “we couldn’t convince a section of farmers despite our best efforts”. ” The goal of the three farm laws was to empower farmers, especially small farmers. In the coming Parliament session, we will take constitutional measures to repeal these farm laws,” PM Modi said.

In a major decision, PM Modi announced that the government would repeal all three farm laws. “We worked to provide farmers with seeds at reasonable rates and facilities like micro-irrigation, 22 crore soil health cards. Such factors have contributed to increased agricultural production. We strengthened Fasal Bima Yojana, brought more farmers under it,” PM Modi said.

Prime Minister Narendra Modi said that three farm laws were brought to empower and strengthen small farmers, adding that it was a demand by farmers, economists and agri experts.

PM Modi, during his speech, stressed on how the government’s initiatives have led to an increase in agricultural production. “We have strengthened our rural markets. Several schemes have been brought in to help small farmers. Budget allocation for farmers has increased five times. We have doubled funds for micro irrigation as well,” PM Modi said. Thousands of farmers, mostly from Punjab, Haryana and western Uttar Pradesh, have been camping at several Delhi border points since November 28, 2020, demanding a complete repeal of three farm laws and a legal guarantee on minimum support price for their crops.

Majority of farmers are small scale ones and to help them, we took on a multi-faceted approach — from seed technology, crop insurance schemes: PM Modi.

Guru Nanak ji had said “Vich Duniya Sev Kamaiye, Taan Dargah Baisan Paiyeea”. It means that only by taking the path of service towards the nation can life turn out well. Our government has been working with this sense of service, to make the lives of people easy: PM Narendra Modi

Our government has distributed 22 crore soil cards to farmers. We have also made ‘Fasal beema” more effective and brought more farmers under its ambit. Changed old laws to provide more compensation to farmers during natural calamities: PM Modi

I extend my greetings to all on the occasion of Dev Deepawali and Prakash Parv. It is pleasing that the Kartarpur Corridor has re-opened after a gap of 1.5 years: PM Narendra Modi addresses the nation.

Prime Minister Narendra Modi started his address the nation at 9 am today. Later in the day, he will be inaugurating key irrigation schemes in Uttar Pradesh and leaves for Jhansi to hand over locally produced military hardware to Indian armed forces on the final day of ‘Rashtra Raksha Samparpan Parv’.

Prime Minister Narendra Modi is addressing the nation at 9 am today before he inaugurates key irrigation schemes in Uttar Pradesh and leaves for Jhansi to hand over locally produced military hardware to Indian armed forces on the final day of ‘Rashtra Raksha Samparpan Parv’.

It is essential for democracies to work together to invest in future technology, deepen intelligence on cyber security and prevent manipulation of public opinion, Prime Minister Narendra Modi said Thursday while flagging cryptocurrency as one of the areas where they should work together to “ensure it does not end up in the wrong hands” and “spoil our youth”.

Speaking on “India’s technology evolution and revolution” during a virtual address at the inaugural Sydney Dialogue, Modi referred to the digital age that “is changing everything around us” and said it was “essential for democracies to work together” — from technology to supply chains. (Read more)

Days after inaugurating the Purvanchal Expressway, Prime Minister Narendra Modi will begin his three-day Uttar Pradesh visit on Friday with the inauguration and launch of infrastructure projects worth more than Rs 6,000 crore in the Bundelkhand region. He will then head to Lucknow to attend a two-day conference of senior police officials.

On Friday, the prime minister will first visit the district of Mahoba to inaugurate various irrigation and water projects worth Rs 3,250 crore, including the Arjun Sahayak Irrigation Project, the Ratauli Weir Project, the Bhaoni Dam Project and the Majhgaon-Chilli Sprinkler Project. The development works aim to facilitate the irrigation of around 65,000 hectares of land in Mahoba and its neighbouring districts such as Hamirpur, Banda and Lalitpur. (Read more)

PM Modi to meet heads of security forces in Lucknow