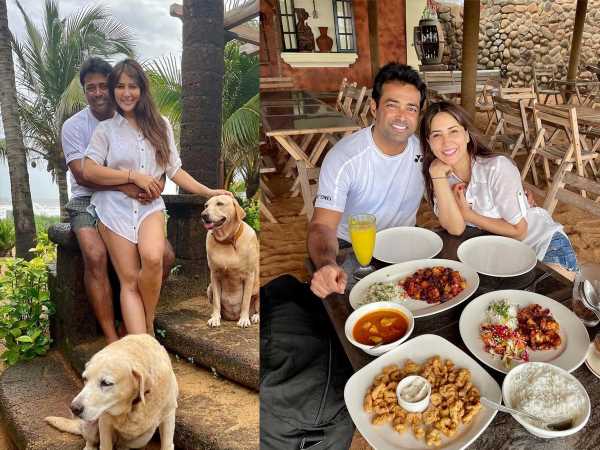 Kim Sharma is a popular name in Telugu film Industry as she has acted in few Telugu dramas like ‘Khadgam’, ‘Yagam’ and ‘Magadheera’. She  was earlier in the news for her break up with Sanam Teri Kasam actor Harshvardhan Rane. Though the Mohabbatein lady is away from limelight for quite some time but is very active on social media sites.  She  rose to fame after she appeared in Pond’s, Fair & Lovely, Clean & Clear, Sunsilk, Pepsi, Tata Safari and Liril advertisements.

Now according to the latest buzz in the film industry,  Kim Sharma and Indian Tennis star Leander Paes are in love and dating each other.   Though the love birds are maintaining silence, they have not confirmed their relationship and in fact, both have largely kept it low-key.

Currently Kim Sharma and Leander Paes are enjoying a vacation in Goa.

Recently, a photograph of Kim Sharma and Leander Paes was shared by the restaurant on Instagram, that went viral on the social media. The photograph featured the two posing as they sat down for a meal together.  In another pic, Kim Sharma was seen leaning on Leander’s shoulder. The love birds look super happy as they are seen sporting smiles on their faces.

A post shared by Pousada By The Beach (@pousadabythebeachgoa)