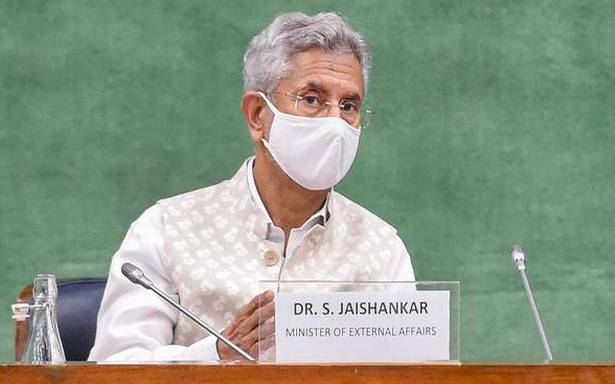 Minister advocates ‘central role’ for U.N. in dealing with the crisis

India is willing to stand by the Afghan people just as it supported them in the past, said External Affairs Minister S. Jaishankar. Addressing the UN High Level Meeting on the Humanitarian Situation in Afghanistan, the Minister expressed support for a “central role” for the U.N. in dealing with the crisis.

“Today, I want to underline that in the face of a grave emerging situation India is willing to stand by the Afghan people, just as in the past,” said Mr. Jaishankar urging the international community to “come together” . India expressed its “understandable concern” about the situation two days after Mr. Jaishankar joined his Australian counterpart in highlighting the importance of the Security Counil Resolusion 2593 in dealing with the crisis.

Addressing the U.N. meeting chaired by Secretary-General Antonio Guterres, Mr. Jaishankar reiterated the importance of the Resolution and said, “India has consistently supported a central role of the United Nations on its [Afghanistan’s] future. A multilateral platform is always more effective than small groups in building global consensus and encouraging united actions.”

The negotiations to end U.S. military presence in Afghanistan was conducted through Special US Representative Zalmay Khalilzad and the political office of the Taliban based in Qatar.

Subsequently, the permanent members of the Security Council as well as Iran, Saudi Arabia and others used special envoys or other officials to engage the Taliban in either overt or covert ways. But Mr. Jaishankar’s firm call to give the “central role” to the U.N. has brought back the global organisation into the spotlight for initiatives on Afghanistan. This call is also reflective of India’s traditional Afghan policy going back to the beginning of the Soviet occupation in 1979-’80 when India championed the U.N.-led approach.

There are already early hints of the initiatives from the U.N. The Resolution 2593 has made a ‘demand’ that the emerging political system should not allow terror groups to use Afghan soil to either threaten or attack any country. This point is second among the issues listed in the resolution and appears even before the call for humanitarian assistance. This gives the impression that concern over export of terror from Afghanistan makes economic assistance conditional to its commitments on terrorism.

Special Representative of the Secretary-General for Afghanistan Deborah Lyons last week cautioned that freezing of billions of dollars of Afghan assets is likely to trigger a “severe economic downturn” in the country. The concern found an echo also in Mr. Jaishankar’s speech as he urged for “unimpeded, unrestricted and direct access to Afghanistan”. His focus was however on letting “humanitarian assistance providers” to help the people.

“Once relief materials reach that country, the world will naturally expect a non-discriminatory distribution of humanitarian assistance across all sections of the Afghan society. Only the United Nations has the capacity to monitor such endeavours and reassure donors,” said Mr. Jaishankar highlighting the “legitimate concerns” over the emerging political set up.

Mr. Jaishankar reminded the U.N. that New Delhi has invested $3 billion in schemes in Afghanistan during the past two decades.