India coronavirus cases numbers explained: As the number of new infections have come down, so have the number of deaths. On Wednesday, 680 coronavirus-related deaths were reported, the lowest since July 27. Along with the drop in the number of new infections being detected, there has also been a significant decline in the coronavirus-related deaths being reported every day. For the last twelve days now, the number of deaths have remained below 1,000.

But as the number of new infections, rather inexplicably, has come down in the last month, so have the number of deaths. On Wednesday, 680 coronavirus-related deaths were reported from across the country, the lowest since July 27. For the last three days, this tally has remained below 800.

The decline in number of deaths is not surprising, because it indeed is linked to the number of people getting infected. The trend in deaths usually follow the trend in infection numbers with a lag of about two weeks. It’s almost been four weeks since the decline in infections began, while the death count has begun to drop in the last two weeks. Yet, sharp drop in the death tally on Thursday is a bit surprising, though welcome. 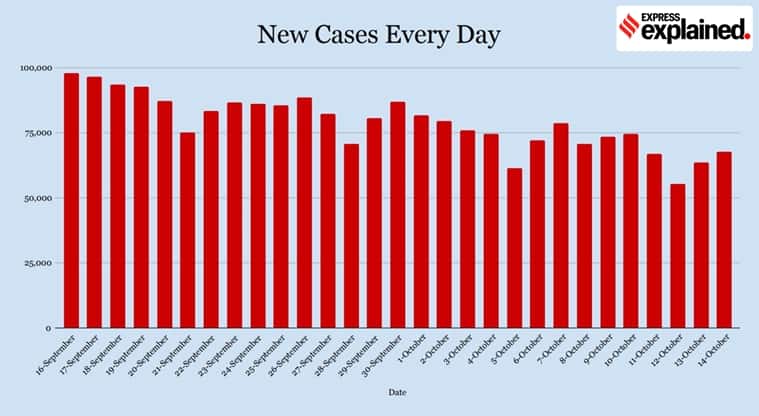 Meanwhile, Delhi has once again begun to report more than 3,000 new cases in a day. The Delhi numbers had remained below 3,000 for twelve days, but crossed that figure on Tuesday and Wednesday. But it is still too early to say whether the declining trend in Delhi has been reversed.

One state where the decline in cases has been the most impressive is Andhra Pradesh, the state with the second highest caseload in the country. Over a month period, the number of cases have steadily come down from a level of 10,000 a day to less than 4,000 now. On Wednesday, it recorded about 3,900 new cases, the first time that this number had gone below 4,000 on a non-Monday since July 20. From a high of over 8 per cent a day in July, the growth rate has dropped to just about 0.6 per cent a day now. Kerala also finally seems to be showing signs of a reduction. In the last three days, its daily infection numbers have been considerably lower than what it has been reporting in recent times. Its growth rate has fallen below three per cent for the first time in over a month.

Less than 68,000 new cases were detected across the country on Wednesday, while more than 81,000 people were declared to have recovered from the disease. Recoveries have exceeded the new infections on 22 of the last 27 days now. Over 73 lakh people have so far been infected with the disease, nearly 64 lakh of whom have recovered.

JEE Main to be conducted in more regional languages from next year: Education Minister
Celebrity News

Explained: The Vatican’s stance on same-sex civil unions over the years