The idea is the brainchild of Narender Kumar, a retired Navy officer. When three deaths were recorded in Ghitorni on a single day in mid-April, at the height of the second wave in Delhi that had patients scrambling for help, Kumar thought of turning to the three doctors in his family for a solution. 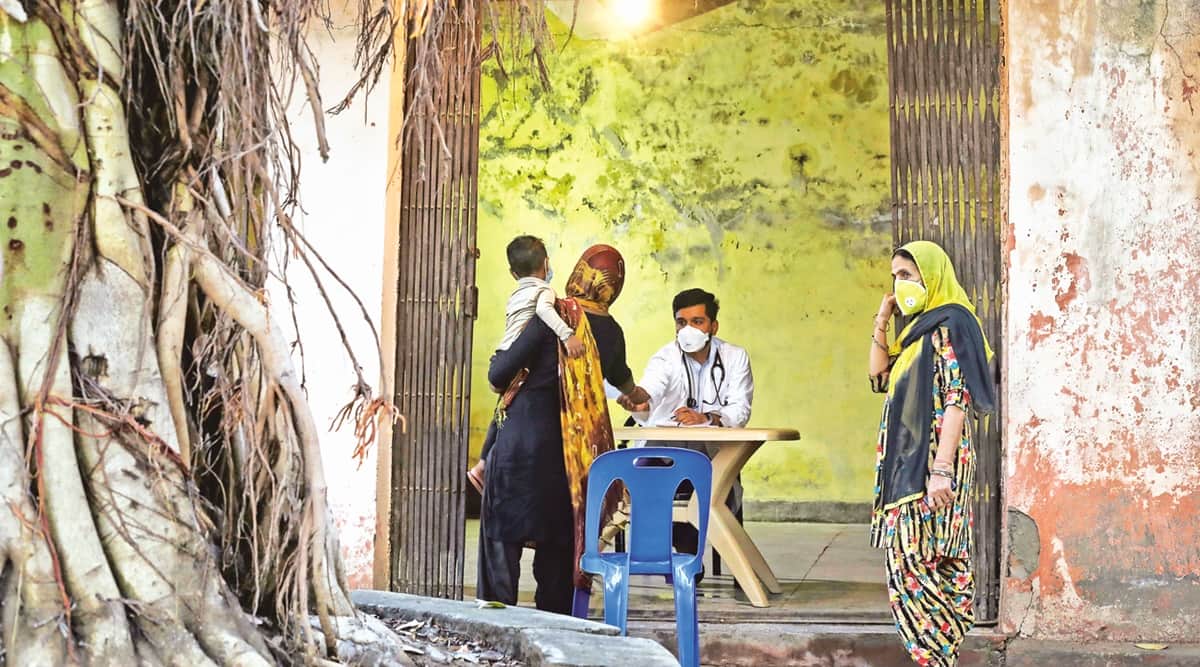 EVERY evening, under a banyan tree in Delhi’s urban village of Ghitorni, a steady crowd builds up. One by one, they go in for consultation to a nearby ‘baraat ghar’ room, where a group of volunteers has come together to help this village of around one lakh — more known for the jazzy furniture stores that line the highway connecting it to Gurgaon — fight Covid.

The idea is the brainchild of Narender Kumar, a retired Navy officer. When three deaths were recorded in Ghitorni on a single day in mid-April, at the height of the second wave in Delhi that had patients scrambling for help, Kumar thought of turning to the three doctors in his family for a solution.

The result was the ‘Chaupal OPD’, now functional for 10 days, with 13 volunteers, including the doctors from Kumar’s family. They see patients coming in with Covid or Covid-like symptoms, not charging any fee for their medical advice, with numbers now 40-50 a day.

Says Kumar, “The main purpose was to rid people of their fears. A month ago, people were panicking, trying to get beds. And some patients were dying without proper treatment; many with mild symptoms were getting serious all of a sudden. Now, we monitor the condition of patients and advise them to get tested or admitted to a hospital as and when required.”

While the ‘OPD’ functions from 5 pm to 7.30 pm, doctors are available for teleconsultation through the day. They include Dr Vandana Kasana Lohia, a paediatrician currently on maternity leave, who is available on call anytime, and tends especially to Covid cases in children. The facility also has five oxygen cylinders, with two patients having used them so far.

While some volunteers hand out generic medicines such as Dolo 650, Viola cough syrup, Vitamin C and D capsules, among others, for free, others register patients and do basic checks like for oxygen and pulse. Some also deliver medicines house to house.

Currently, says Kumar, their volunteers are giving medicines to around 45 patients, prescribed based on the severity of the case. The cost of running the facility is being borne by the team members themselves, with some NGOs.

Rajabala Lohia (58), who was present at the ‘Chaupal OPD’ on Friday, said she had a cold and cough while her husband was recovering from pneumonia. Thankful for the medical help, she said, “We don’t know where we would go otherwise. There are long lines everywhere and no beds. We are glad we can come here as it is walking distance from our homes.”

Also at the ‘OPD’ on Friday was the son of an 88-year-old. He was there to tell Dr Robin Lohia, one of the three doctors at the facility, that his father, who received medical aid from them, had recovered. Dr Robin, who is also on Covid duty at Safdarjung Hospital, told him to continue taking precautions and maintain a healthy diet.

“The patient was diagnosed with Covid around 17 days ago. The family had arranged oxygen support at home. We prescribed a few medicines, which he had been taking for the last few days,” Dr Lohia said. “It is nice to see he has recovered.”

Kumar says there is another thing that keeps them going. Since the ‘Chaupal OPD’ started, Ghitorni has seen a single death.