At the 'Howdy Modi: Shared Dreams, Bright Futures' event in Houston on Sunday night, Modi and Trump spoke of strengthened ties between India-US, and addressed each other as "loyal friends". 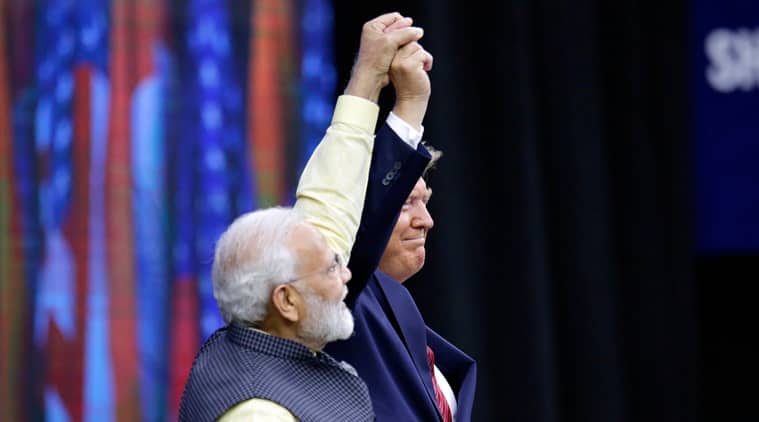 At the ‘Howdy Modi: Shared Dreams, Bright Futures’ event in Houston on Sunday night, Modi and Trump spoke of strengthened ties between India-US, and addressed each other as “loyal friends”. They used each others campaign slogans; Modi nearly endorsed Trump’s reelection with ‘Abki baar Trump sarkar’, and ‘Make America great again’, while Trump borrowed the ‘Make in India’ slogan to promote ‘Made in America’.

What international media reported on Modi-Trump in Houston:

“The rally brought together two leaders with similar styles. Both rose to power by embracing right-wing populism, portraying themselves as champions of the masses fighting against an entrenched establishment. Both presented voters with a vision to make their respective countries ‘great again’, and both have fanned tensions along religious, economic and social fault lines,” reported NYT, in an article titled, ‘At rally for India’s Modi, Trump plays second fiddle but a familiar tune’.

WaPo, in an article titled ‘Trump plays unusual role of warm-up act at massive Modi rally in Houston’, described the two leaders as “centre-right politicians who govern with big personalities and stir controversy”.

It adds, “Modi’s overtures come at a delicate moment in US-India relations. After the United States imposed tariffs on Indian steel and aluminum imports, India has been looking for ways to decrease trade tensions with the Trump administration and stimulate fresh investment.”

Calling the ‘Howdy Modi’ event “weird”, Cas Mudde writes in an opinion column in The Guardian: “This Sunday, two far-right leaders met in Houston, representing two of the most populous and powerful democracies in the world. They are the new mainstream!

“The mainstreaming of Trump is now well-known, but no one personifies the mainstreaming and normalization of the far-right better than Modi, darling of the international business community, who sells India abroad as a modern, rising economic power, while implementing a radical Hindu nationalism (Hindutva) at home. On his travels all around the world, he is rarely confronted with protesters and few journalists will describe him as far right,” the author adds.

“(This) lack of a global agenda was on full display in the past week. While Modi fed his Indian American base some anti-Pakistan red meat in Houston, accusing its northern neighbors of supporting terrorism, Trump said only a few days earlier that he had ‘great relationship with Pakistan and with India’. And even on trade Modi and Trump are at best close to a “mini-deal”.

Express Editorial: For Modi, Trump, Indian-American community is an important constituency and a diplomatic bridge

“This rally has been called a win-win for both the leaders. For President Trump, it was a chance to court Indian-Americans for the 2020 presidential election race where Texas could emerge as a battleground state. For Mr Modi, a PR triumph and picture with the president of the United States may help him shrug off the criticism over his recent strong-arm polices at home,” the BBC reported.

Dawn carried a report on the environment outside the venue, where activists held protests against the Prime Minister. “As Modi started his speech, outside the stadium the fervour and anger of thousands of Indians, Pakistanis, white allies and supporters of all races and nationalities is palpable,” it said.

It quotes a Houston resident as saying: “(I’m) just a concerned desi who wants to raise awareness about what’s happening in Kashmir. We need to get rid of Trump and Modi.”

Pakistan’s Geo News called the two leaders “like-minded nationalists fond of fiery rallies and skeptical of traditional media”. It reported the “anti-India demonstrations” outside the venue, attended by Hindu, Muslim, Dalit, Sikh and Christian groups under the umbrella of Alliance for Justice and Accountability (AJA).

“For Mr Modi, the picture opportunity might help him shrug off recent international criticism of his controversial actions in Kashmir or smooth over trade tensions with the US, as he heads to the UN General Assembly,” a report in ABC News reads, adding that the appearance seemed like “an attempt… to show (his) worth to Mr Trump”.