By becoming the first woman ever to contest a Lok Sabha election in Mizoram, Lalthlamuani has already made history. 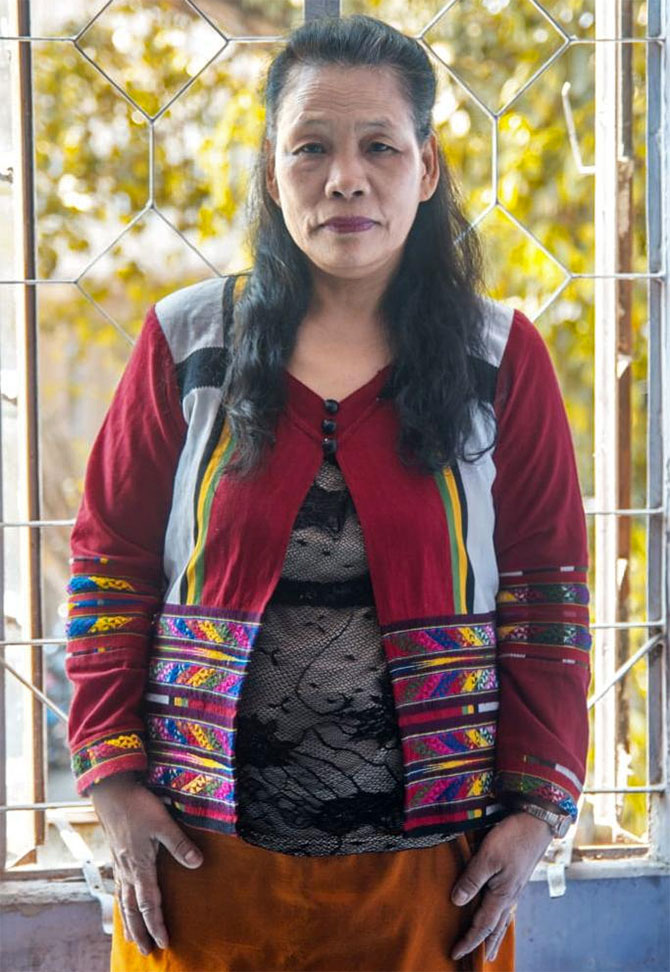 Lalthlamuani, 63, the first woman ever to contest a parliamentary election in Mizoram, is yet to begin campaigning.

With a few days to election day, two of her granddaughters had gone out to look for a hall they could book for a public gathering in the state capital, Aizawl.

She had not campaigned because she was grieving with her sister who lost her husband last week.

“We are a small family, but a strong-knit family,” the candidate’s son Franky Zosanglura Sailo tells Rediff.com‘s Archana Masih over the phone from his aunt’s house where the family had gathered for a prayer meeting in Aizawl.

Mizoram has only one seat in the Lok Sabha. Lalthlamuani faces five male opponents, which include a former director general of Doordarshan, a sports journalist, an engineer, a sailor and an ex-MLA.

Mizoram sent its first MP to the Lok Sabha when it became a Union Territory in 1972. It received statehood in 1987.

A Mizo Jew, Lalthlamuani belongs to one of the 10 Lost Tribes of Israel exiled from their land by the Assyrian empire in 723 BCE.

The Bnei Menashes (Hebrew for ‘Sons of Manasseh’) settled in Mizoram and Manipur and are estimated to number around 30,000, of which 20,000 have migrated to Israel, says Franky.

Though many Mizo Jews migrated to Israel, the Sailos never wanted to.

The family looks after one of the three synagogues in Aizawl. Unlike the other Jews that follow Judaism, the Bnei Menashes believe in Christ and the Bible. 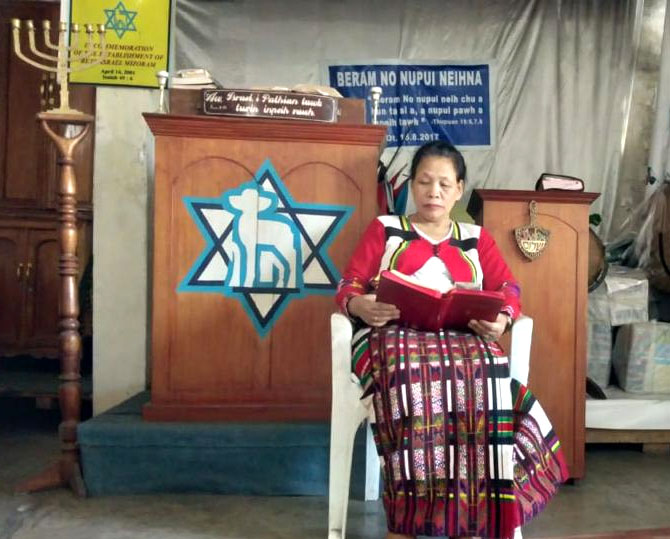 “She is contesting to have a voice. People representing the north east at the Centre have been negligent — her getting elected will bring focus on the lost tribes of India and shift focus to the north east,” says Franky who left his job in Wipro, New Delhi, and moved to live with his mother after his elder brother passed away last April.

The mother of four and grandmother of seven, Lalthlamuani filed her nomination at the last minute. She did so because God told her so — ‘God told me to contest,’ she says.

Mizoram has had only three women legislators in its legislative history.

Lalthlamuani did not intend to contest the Lok Sabha election this time, but changed her mind after an early morning dream, a day before the last day of nomination.

“I believe it is my duty to proclaim the vision that God has shown me that we are the lost tribe of Israel, and the MP election is the best platform to champion the cause of our small community,” Lalthlamuani says in a written reply, as she is more comfortable in her native Mizo than English.

“I believe contesting the election is just a stepping stone for women all over this nation to stand up and rise for this country,” she adds.

A high school pass, she took on the presidency of the Chhinlung Israel People’s Convention, an NGO that works for the believers of the Lost Tribe of Israel, after her husband’s death.

They believe it is not necessary to convert to Judaism to be recognised as a Lost Tribe and their existence shows that there are Messianic Jews not only in Israel but in other parts of the world.

By her candidature, she hopes to challenge educated young women to have more faith in themselves and fight elections.

“It is not like the old days that men are the only people who can change the world,” adds Franky.

Sharing a border with Bangladesh and Myanmar, Mizoram has a strategic location and Lalthlamuani wants to help the state’s farmers with better cultivation techniques, especially setting up of cold storages in villages.

Ginger is a popular produce that can be sent to different parts of the country, she feels.

“I will also try and tie up with the Israel government to enable options for employment and for easier and cheaper way for the Mizo Jews to visit the Holy Land,” she notes.

After winning only 69 votes in the last election and up against formidable male opponents, Lalthlamuani knows she has a very slim chance of victory.

“With just few days left, she will call a prayer gathering and let God do his work,” says Franky. “She says it’s all in God’s hand.”

Faith can move mountains — and Lalthlamuani is looking up to those mountains.

The Mizoram Lok Sabha seat is reserved for scheduled tribes. The state will go to the polls on April 11.

Death or Murder of TV anchor Shanthi in Hyderabad

Uttam’s Take: UP’s Andha Kanoon
We and our partners use cookies on this site to improve our service, perform analytics, personalize advertising, measure advertising performance, and remember website preferences.Ok