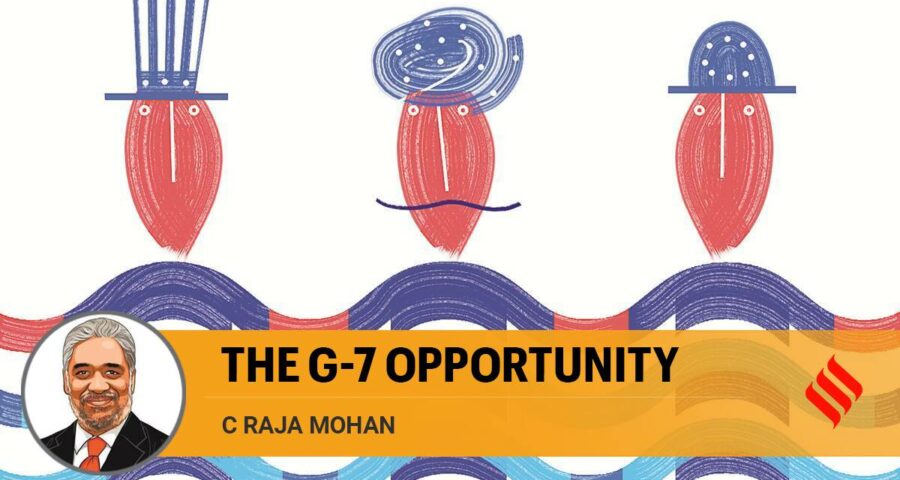 This week’s summit of the Group of Seven industrial countries hosted by the United Kingdom in the picturesque Cornwall region promises to be a definitive moment in the political evolution of the West. The summit, which will see the digital participation of Prime Minister Narendra Modi, also marks an important step towards a new global compact between India and the West.

That the West is in terminal decline has been the conventional wisdom since the global financial crisis of 2008. It has since gained much traction thanks to the rapid rise of China, deepening divisions within the West during the Trump years, and the chaotic response in North America and Europe to the Covid-19 pandemic.

In his first tour abroad as the US president, Joe Biden wants to reverse the global perception of a flailing West. President Biden, who declared that “America is back”, wants to demonstrate that the collective West is an enduring force to reckon with under renewed American leadership. For Delhi, the G-7 summit is an opportunity to expand the global dimension of India’s growing partnerships with the US and Europe.

In his week-long visit to Britain and Europe, Biden will travel from the UK to Brussels to confer with the leaders of the long-standing US military alliance, the North Atlantic Treaty Organisation (NATO) and join a summit of the US and the European Union. He will wrap up his tour by meeting Russian President Vladimir Putin in Geneva. In calling for the normalisation of relations with Russia, Biden seems ready to take a fresh look at Washington’s fraught relationship with Moscow early on in his presidency.

If President Donald Trump’s “America First” policies weakened the West, Biden is determined to strengthen US alliances and draw India into a new global architecture. The challenges from an increasingly aggressive China, the urgency of mitigating climate change, and the construction of a post-pandemic international order are generating an unprecedented convergence between the interests of India and the West.

Biden’s quick elevation of the Quad (which brings the US together with Australia, India and Japan) to the summit level in March was about defining a new agenda for a particular geography, the Indo-Pacific; India’s current engagement with the G-7 is about global issues.

To be sure, this is not the first time that India is participating in the G-7 nor is it novel to have G-7 leaders invite different countries to join them in extended consultations with leaders from the non-Western world. The difference this time is the conception behind Prime Minister Boris Johnson’s invitation to the leaders of India, Australia, South Africa and South Korea to join the G-7 summit this year.

Johnson wants to build a coalition of leading democracies to “help fight and build back better from the coronavirus and create a greener and more prosperous future”. The idea of a global democratic coalition that is based more broadly than the geographic West has gained ground in recent years. And India is at the very heart of that Western calculus.

There is no doubt that the increasing intensity of this engagement with the US and the West has been triggered in part by the continuous deterioration of the relationship with China. The frequent military crises at the northern frontiers — in 2013, 2014, 2017 and 2020 — have compelled Delhi to reevaluate its threat perceptions.

Besides the threat to territorial security, India finds that its hopes for strong global cooperation with China— through such forums as the RIC (Russia-India-China forum), BRICS (Brazil, Russia, India, China and South Africa) — have taken a big beating in recent years. China is the only great power that does not support India’s permanent membership of the UN Security Council and blocks India’s membership of the Nuclear Suppliers Group.

At the end of the Cold War, Delhi believed that Beijing was a natural partner in the construction of a multipolar world to limit the dangers of a unipolar world dominated by the US. Delhi now can’t escape the conclusion that China is the greatest obstacle to India’s global aspirations and the West is an emerging partner.

The growing trade imbalance with China and the negative impact of Chinese imports on India’s domestic manufacturing saw Delhi walk away in 2019 from the Beijing-dominated Regional Comprehensive Economic Partnership (RCEP). After China’s aggression in Ladakh last April, India has also sought to actively limit its exposure to Chinese investments and technology.

India is not only reluctant to integrate with the China-led Asian economic order, but it is also turning to the West — the US, UK, EU and others — for trade agreements. India is also eager to emerge as a critical node in future supply chains oriented to the democratic world, including in the area of vaccine production.

Although Delhi’s China problem has become acute and Moscow has moved closer to Beijing in recent years, India has been reluctant to abandon its longstanding ties with Russia. That approach had come under stress as US-Russia ties deteriorated rapidly. Delhi now hopes that a renewed dialogue between Washington and Moscow leading to a relaxation of tensions between them will ease India’s navigation among the great powers.

The growing convergence of interests between India and the West does not mean the two sides will agree on everything. After all, there are many areas of continuing divergence within the West — from the economic role of the state to the democratic regulation of social media and the technology giants.

It will surely not be easy translating the broad convergences between India and the West into tangible cooperation. That would require sustained negotiations on converting shared interests — on reforming the global economic order, mitigating climate change, promoting greener growth, making the world immune to future pandemics, and constructing trusted supply chains — into concrete outcomes.

Looking east and mobilising the south have been India’s default political orientations all these decades. While Delhi continues to strengthen its partnerships in Asia and the global south, a more productive partnership with the West helps secure a growing array of India’s national interests and adds a new depth to India’s international relations.

This column first appeared in the print edition on June 8, 2021 under the title ‘The G-7 opportunity’. The writer is director, Institute of South Asian Studies, National University of Singapore, and contributing editor on international affairs for The Indian Express.