According to police, the accused (name withheld to protect the identity of a minor victim) had a total of four previous cases pending against him — filed under various IPC sections, including 376 (rape), 354 (assault with intention to outrage modesty of a woman) and 363 (kidnapping). 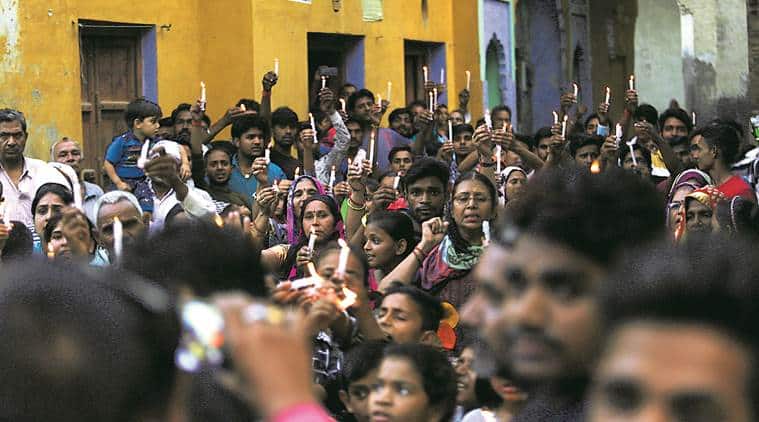 One of the men accused in the murder of a two-year-old girl in Aligarh had earlier been arrested for the alleged rape of his own seven-year-old daughter, and was out on bail, police have told The Indian Express.

According to police, the accused (name withheld to protect the identity of a minor victim) had a total of four previous cases pending against him — filed under various IPC sections, including 376 (rape), 354 (assault with intention to outrage modesty of a woman) and 363 (kidnapping). He was accused of raping his daughter in 2014 on the basis of a complaint by a relative. The area SHO said he was granted bail some months later.

The man and his accomplice, Jahed, are accused of kidnapping the two-year-old girl from outside her home on May 30, and disposing of her body in a garbage dump after killing her — allegedly over a monetary dispute Jahed had with the girl’s grandfather. The body was found three days later, by which time it had decomposed and animals had damaged it, police said.

The girl’s mother told The Indian Express that “police did not act in time”. “It was around 8.30 am and she was playing outside. She was very playful. The men picked her up from right outside our house. We did not notice as she would usually play in the neighbourhood. When she didn’t return, we panicked and started searching. Police did not act the way they should have on the first day itself,” she said.

On Sunday morning, a cleaner noticed the girl’s body in the garbage dump outside Jahed’s house, surrounded by dogs. The body had been wrapped in a chunni.

“I demand justice and nothing else. It is possible she may have been raped too,” the girl’s father said.
On Friday, Anand Kumar, Additional Director General, Law and Order, said: “The entire society has been saddened by the crime. A Special Investigation Team, headed by SP Rural, has been formed. A team of experts, the circle officer and members of the forensic team are part of it. We will transfer the case to a fast-track court for speedy justice.” He added that a probe is on to ascertain if anyone else is involved.

Five policemen, including the Station House Officer, have been suspended for alleged lapses in investigation and an enquiry has been set up.

While the family has alleged the girl was also raped, police have so far maintained the post-mortem report does not corroborate it. However, another test is being conducted. “The body was more than 72 hours old and the cause of death is shock and haemorrhage. There was putrefaction and entry of maggots. A vaginal sample has been sent to the forensic lab and confirmatory tests are being conducted,” Anand Kumar said.

Aligarh SP (Rural) Mani Lal Patidar, who is supervising the SIT, said rape has not been established so far.
Aligarh police said the National Security Act may be invoked against the accused and police will also consider adding charges under the Prevention of Children from Sexual Offences (POCSO) Act depending on the findings of the autopsy report. “Other details are also being investigated. As per the family, there are a few others involved and we are investigating that,” said Kumar.

According to police, Jahed had borrowed Rs 50,000 from the girl’s grandfather. Three days before the incident, the two ran into each other, and he asked Jahed for the remainder of the money, roughly Rs 10,000. “It amounted to a few thousands. I was willing to let go of it. But he told me, ‘dekh lenge tumhe’. I have no enmity and did not take it seriously. I could never imagine he would do such a heinous act,” the girl’s grandfather told The Indian Express

According to police, both accused are daily wager labourers. Locals said they “came in contact because of their gambling habit”, and Jahed was known in the area as the “satta king”.

On Friday, homes of both men were deserted as their families had fled in fear. “Once we find their family members, we will question them as well,” said the SHO of the police station concerned.

With inputs from Avaneesh Mishra