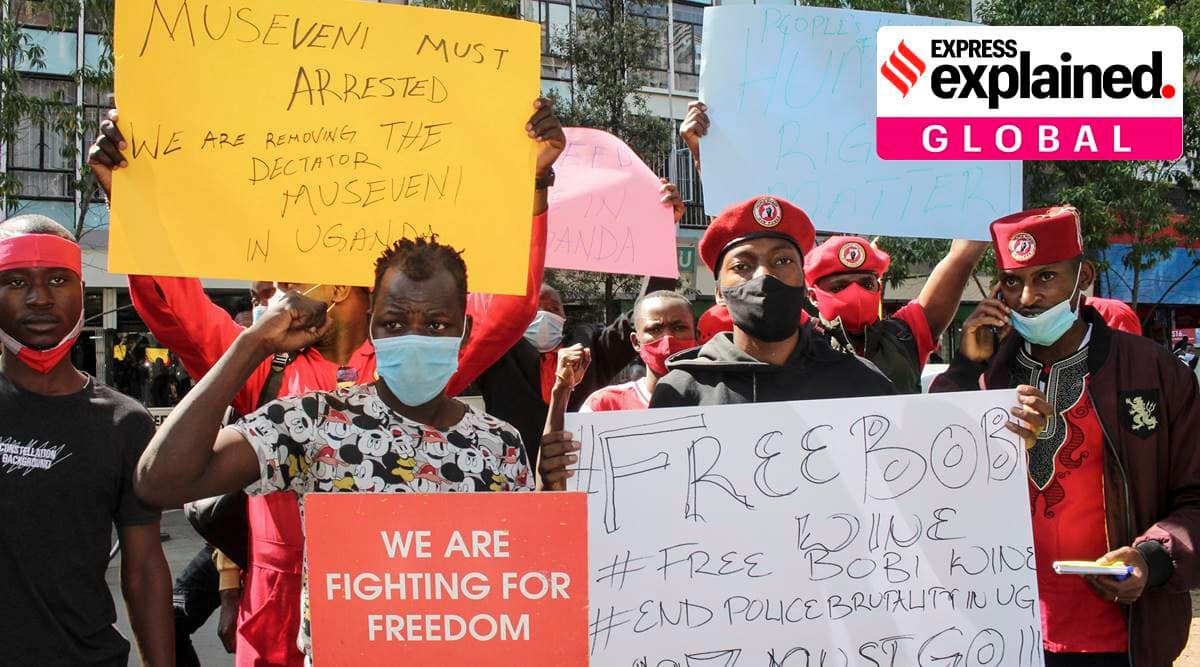 At least seven people have been killed and dozens injured in protests that broke out across Uganda on Wednesday (November 18), over the arrest of popular musician and presidential hopeful Bobi Wine.

Security forces in the capital city of Kampala fired bullets and tear gas at hundreds of Wine’s supporters, who gathered on the streets to demand his immediate release.

Wine was arrested for the second time this month while campaigning in Eastern Uganda. “The price of freedom is high but we shall certainly overcome,” read a tweet from his official handle soon after he was detained.

Ever since he first announced his intention to run against the country’s long-time President Yoweri Museveni, Wine has been able to garner a large following, particularly among the youth of the East African nation. He has been beaten and arrested by security personnel multiple times over the last few years.

Who is Bobi Wine?

Robert Kyagulanyi Ssentamu, who is better known by his stage name Bobi Wine, is a former musician who took Ugandan politics by storm after winning a parliamentary seat in Kyadondo East by a landslide in 2017. The following year, the 38-year-old announced he would challenge the country’s longest serving leader, Yoweri Museveni, in the election slated for January 2021.

Over the last two years, Wine has grown to become Museveni’s biggest challenger. Many of his young supporters have said they are drawn to the scathing and unflinching critique of Museveni heard in several of Wine’s original songs.

In one such song about Museveni, Wine sings, “Freedom fighters become dictators. They look upon the youth and say we’re destructors.”

Museveni, who initially dismissed Wine as a “hooligan” from the “ghettos”, had come to power in 1986 after overthrowing two dictators.

For a while, he was regarded as a freedom fighter and was praised for restoring stability in the country and encouraging economic growth. But he has been known to maintain a firm grip on power through repression and by silencing his opposition.

In 2017, Ugandan lawmakers amended the constitution to allow Museveni to rule for life.

Why was Wine arrested this week?

The reggae musician-turned-politician was arrested while campaigning in Eastern Uganda, his staff announced on Twitter. Ugandan police accused him of violating Covid-19 restrictions by hosting a rally with over 200 people.

“Despite repeated warnings issued to candidates, their agents and wider public about the negative impact and health risks of holding unauthorized rallies and processions, we continue to witness acts of defiance and total disregard of the EC [Electoral Commission] guidelines. Therefore, those who shall defy these Electoral Commission guidelines with their sinister plans aimed at disrupting the electoral process will definitely suffer consequences,” a statement on the police’s official website read, according to CNN.

What happened after his arrest?

After news of his arrest broke, youth-led demonstrations erupted in Kampala and several other major towns in Uganda. Violent clashes broke out between the protestors and the squads of military personnel deployed to suppress them, in which at least 45 were injured, DW reported.

The Ugandan Red Cross said it had to evacuate 11 people who had suffered gunshot wounds.

Several videos shared on social media purportedly show protestors covered in blood after having been shot by law enforcement authorities. Some even appear to be lying on the road, completely unresponsive, BBC reported.

Why was he previously arrested?

Earlier this month, just minutes after he had formally registered his candidacy to challenge President Museveni, Wine had been arrested for allegedly planning to hold an “illegal” rally. Several of his supporters, who had gathered near his house to cheer him on, had also been violently dispersed, according to an AFP report. At least 50 of them were arrested.

Wine claimed he had been “beaten” and “tortured” while in custody.

Uganda has not witnessed a peaceful transfer of power since it attained independence in 1962.

Earlier this month, the country’s election commission announced that not more than 200 people could attend political meetings and rallies, to limit the spread of the coronavirus pandemic. Apart from Wine, Patrick Amuriat, the presidential candidate for the nation’s biggest opposition party, Forum for Democratic Change, was also briefly detained on Wednesday. However, he was released within a few hours.

Critics have accused the ruling National Resistance Movement (NRM) of using Covid-19 guidelines to clamp down on President Museveni’s opponents. Wine and Amuriat are among the 11 candidates challenging the president in the upcoming election.

“It’s not about Covid-19. It’s about repression…People are very angry and they are very right to be angry. People are tired of the double standards; they are tired of the oppression and dictatorship that has caused all these problems in the country,” David Lewis Rubongoya, secretary general of Wine’s National Unity Platform party, told The Guardian.