During her career, Ruth Bader Ginsburg established a reputation as a towering champion of gender equality and women’s rights. She was the second woman in history to serve as a justice in the Supreme Court. US Supreme Court Associate Justice Ruth Bader Ginsburg, who earned the moniker ‘Notorious RBG’ for her scathing dissents and penchant for asking tough questions during her 27-year tenure on the country’s highest court, passed away Saturday. She was 87.

Ginsburg’s demise comes months after she announced that she was undergoing chemotherapy to treat a recurrence of pancreatic cancer. Despite her health taking a turn for the worse in recent years, Ginsburg showed up for almost every single day of oral arguments in the US’ apex court for nearly three decades.

During her legal career, Ginsburg established a reputation as a towering champion of gender equality and women’s rights. She was the second woman in history, after Sandra Day O’Connor, to serve as a justice in the Supreme Court. As the leader of the conservative-tilting bench’s liberal bloc, she played a pivotal role in pushing back against the conservative majority.

Here are some of RBG’s most notable Supreme Court judgments and dissents:

In her opinion, Ginsburg wrote, “Generalizations about ‘the way women are,’ estimates of what is appropriate for most women, no longer justify denying opportunity to women whose talent and capacity place them outside the average description.”

“Women seeking and fit for a VMI quality education cannot be offered anything less, under the State’s obligation to afford them genuinely equal protection,” she added.

The Supreme Court’s ruling in this historic case marked a big win for the rights of people with disabilities. Ginsburg stated that under the Americans for Disabilities Act, people must be placed in community settings rather than in institutions based on the advice of health professionals.

The case involved two women suffering from mental illnesses, who were forced to remain in a psychiatric facility despite medical professionals clearing them for a “community-based programme”.

“States are required to place persons with mental disabilities in community settings rather than in institutions when the State’s treatment professionals have determined that community placement is appropriate, the transfer from institutional care to a less restrictive setting is not opposed by the affected individual, and the placement can be reasonably accommodated, taking into account the resources available to the State and the needs of others with mental disabilities,” Ginsburg wrote. Following voter discrepancies in Florida, the outcome of the presidential election between Republican nominee George W Bush and Democrat Al Gore was brought before the Supreme Court. In a 5-4 decision, the court ruled against a vote recount, which was earlier ordered by the Florida Supreme Court.

Unsurprisingly, Ginsburg was one amongst the four justices who voted in favour of a recount. She criticised the majority’s interpretation of Florida law in her dissent. “The extraordinary setting of this case has obscured the ordinary principle that dictates its proper resolution: federal courts defer to state high courts’ interpretations of their state’s own law. This principle reflects the core of federalism, on which all agree,” she wrote.

While her colleagues wrote that they dissented “respectfully”, Ginsburg chose to simply sign off with “I dissent”.

In the Ledbetter v. Goodyear Tire and Rubber company case, Ginsburg delivered a scalding dissent in support of equal wage and called on the Congress to take action, which ultimately led to the passing of the Lilly Ledbetter Fair Pay Act, signed by President Barack Obama in 2009.

Lilly Ledbetter sued her employer, Goodyear Tire & Rubber company, in 1999 after she discovered that she was paid less than her male counterparts during her 19-year career in the company. She won the case in a federal court in 2003 and was awarded $3.8 million in back pay and damages.

The tire manufacturer appealed and the case wound up in the Supreme Court in 2007. The Supreme Court’s ruling ultimately reversed the federal court’s decision. Ginsburg, the only woman on the nine-judge bench, was amongst the four-justice minority in the case. She took the relatively rare step of reading her dissent from the bench.

“In our view, the court does not comprehend, or is indifferent to, the insidious way in which women can be victims of pay discrimination,” she said. “The ball is in Congress’ court…to correct this Court’s parsimonious reading of Title VII.” 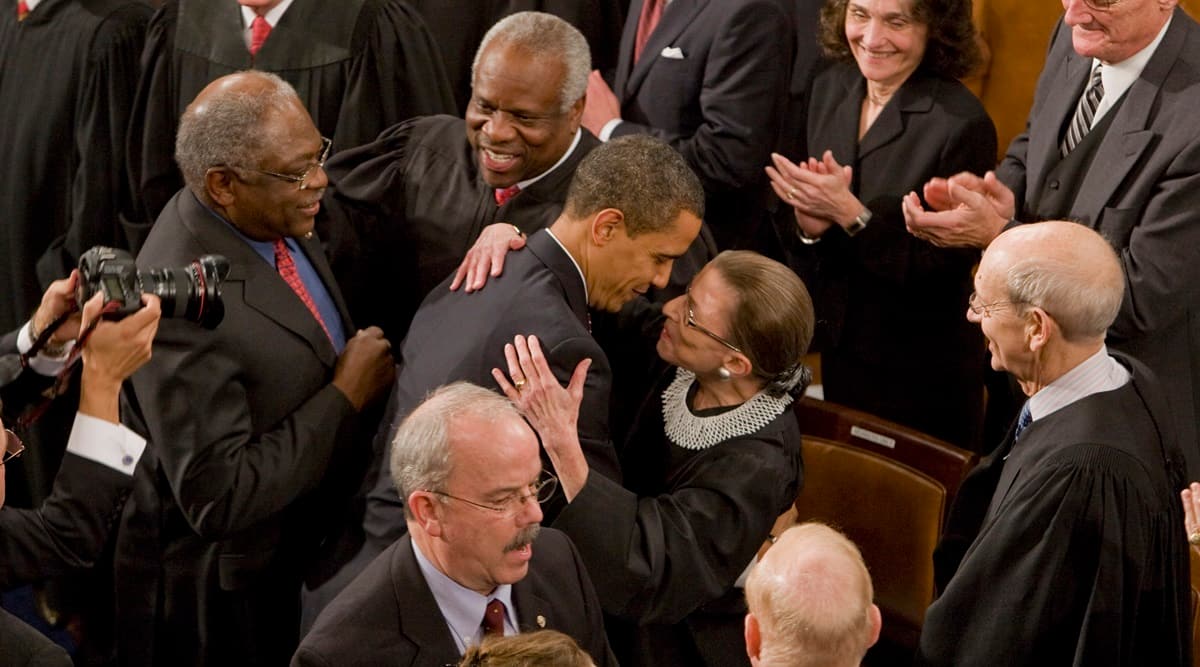 In 2013, the Supreme Court struck down a provision of the 1965 Voting Rights Act, which laid down that states had to get approval from the Justice Department before amending voting laws. The key provision in the act was particularly aimed at jurisdictions with a history of discrimination.

In her blistering dissent, Ginsburg wrote, “When confronting the most constitutionally invidious form of discrimination, and the most fundamental right in our democratic system, Congress’ power to act is at its height.”

“The sad irony of today’s decision lies in (the court’s) utter failure to grasp why the (law) has proven effective,” she added.

It was following her dissent in this case that her young fans began to call her ‘Notorious RBG’, after the famous rapper ‘Notorious BIG’. She quickly became an icon of popular culture.

Don’t miss from Explained | What is the new sexual assault allegation against Donald Trump?

In 2015, Ginsburg joined the 5-4 majority in the Obergefell v. Hodges case, overturning a ban on same-sex marriages across all 50 US states.

“We have changed our idea about marriage. Marriage today is not what it was under the common law tradition, under the civil law tradition,” she said during the oral arguments. “Marriage was a relationship of a dominant male to a subordinate female that ended as a result of this court’s decision in 1982 when Louisiana’s Head and Master Rule was struck down. Would that be a choice that state should [still] be allowed to have? To cling to marriage the way it once was?” 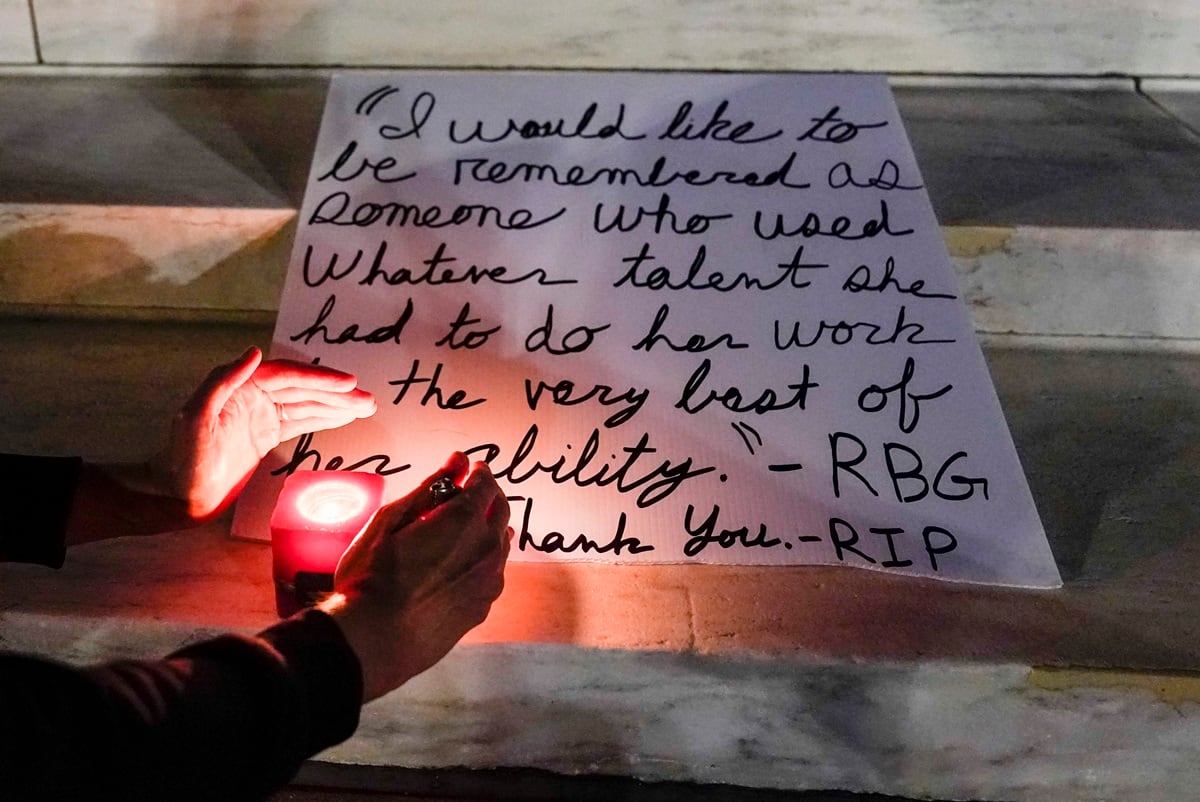 In the Whole Woman’s Health v. Hellerstedt case, an eight-judge Supreme Court bench struck down Texas’ restrictive Omnibus Abortion Bill, which is popularly known as HB 2. The bill includes provisions that allow doctors who perform surgical and medical abortions to have admitting privileges at nearby hospitals. It also required all abortions to be conducted in ambulatory surgical centres.

While she did not write the majority opinion, Ginsburg penned her own views in a concurring opinion. “It is beyond rational belief that H.B. 2 could genuinely protect the health of women, and certain that the law would simply make it more difficult for them to obtain abortions,” she wrote.

“When a State severely limits access to safe and legal procedures, women in desperate circumstances may resort to unlicensed rogue practitioners…at great risk to their health and safety,” she added.