“This is the diwali gift to the Gujarati people. The long time dream of people of Saurashtra and Surat has been fulfilled today, through this ferry services,” the PM said inaugurating the service. 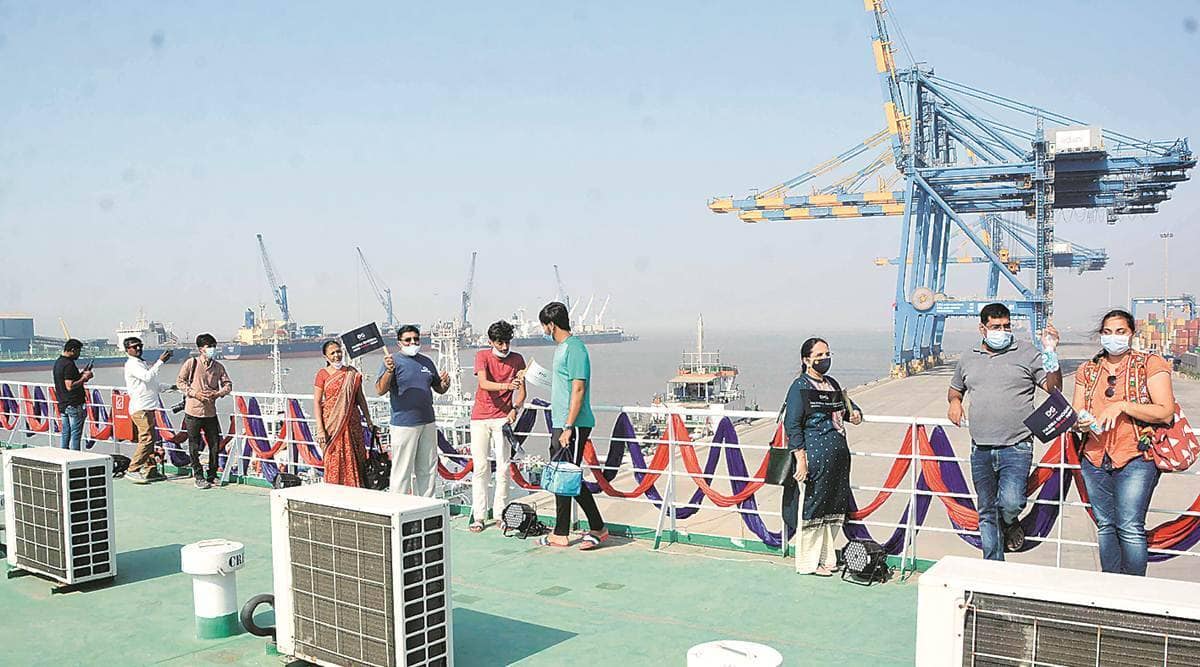 Prime Minister Narendra Modi virtually inaugurated the RoPax ferry service between Hazira in Surat and Ghogha in Bhavnagar district on Sunday, crediting his government for realising the potential of the vast sea route and resources in the country and emphasising on “vocal for local” as the mantra for celebrating Diwali with local products.

“This is the diwali gift to the Gujarati people. The long time dream of people of Saurashtra and Surat has been fulfilled today, through this ferry services,” the PM said inaugurating the service.

“Be it sea route or river route, India has no shortage of resources or expertise. It is also known that transportation by sea is far cheaper than by road or rail and does least damage to the enviroment… but work with a holistic approach in this direction was possible only after 2014,” the PM said.

“These rivers and the sea did not emerge after Modi became the prime minister… they were always there… but this vision was not there… that the country started experiencing after 2014…,” said Modi.

Announcing that the name of the ministry of shipping would be changed to Ministry of Ports, Shipping and Waterways to bring more “clarity” in the work it does, Modi said that his government was trying to optimally use the country’s 21,000 km long coastline.

The service would reduce the distance between Surat and Ghogha from 375 km to 90 ks and reduce the travel time of 10-12 hours to four hours. “In a year, around 80,000 passenger vehicles and 20,000 trucks will take benefit of new services… Farmers easily ferry their products as well as cattle to Surat and South Gujarat. For businessmen from Surat, it will be easy to reach Saurashtra,” said Modi.

Modi added that to become Aatmanirbhar Bharat, it was important to boost the “blue economy” and strengthen sea based logistics “because in our economy, the maximum burden of expenditure is on logistics. With water transport, cost of logistics can be substatntially reduced… our focus is on an economy that ensures seamleass movement of cargo”.

Adding that Gujarat had become a gateway of prosperity via the sea, Modi said, “In the past two decades we have moved from traditional port management systems to a comprehensive model in Gujarat. This model has become a benchmark.” The PM also said how Mundra became a multi-national port and Sikka the largest captive port, claiming that Gujarat ports had more than 40 per cent share of the total sea trade in the country.

“We are working on this multimodal connectivity even with our neighbouring countries, I have hope these attempts will successfully reduce our logistcs cost and the economy will get a new boost,” the PM said.

The PM also said that the government would work on resuming the Ghogha-Dahej ferry service. “This project saw several challenges connected to nature and attempts are being made to meet and resolve them through modern technologies,” said Modi, who inaugurated the Ro-Ro ferry service in 2017 that was suspended later due to siltation issues.

After the inauguration, Union Shipping minister Mansukh Mandaviya, took the RoPax along with 150 passengers, as well as 30 cars and 10 bikes.

Exhorting the people to go for “vocal for local”, Modi said, “This Diwali should become a turning point for vocal for local… buy local things… made in your village, your district, your country.”

He also spoke of plans of his government to spend Rs 20,000 crore on infrastructure related to fisheries to benefit lakhs of fishermen. The PM also interacted with a farmer, a businessman and a transporter via video-conference.

Bhavnagar resident and transporter by profession, Asif Solanki, said, “I transport export goods to Surat, Vapi and Mumbai, by trucks. This ferry services will be beneficial to me… it will reduce the distance, save fuel and time…”

Jembhai Gohil (52), farmer from Bhavnagar, said, “I do vegetable farming in my field…and ferry my produce to Surat. It takes 16 hours to transport agricultural produce in containers and trucks to Surat. Due to the duration, the crops suffer damage also. Now it has become easier.”

Nandlalbhai Patel, a farmer and diamond broker of Bhavnagar, said, “I do business in Surat but travel regularly to my native place where I do farming. Earlier I had to take leave for two to three days for the trip when my business would get affected. With this ferry service, I can go and come back the same day… I can also bring vegetables from Bhavnagar and sell it in Surat.”

GST revenue at ₹1.04 lakh crore in November
We and our partners use cookies on this site to improve our service, perform analytics, personalize advertising, measure advertising performance, and remember website preferences.Ok