The last time such an initiative was taken by the Delhi Zoo was in 1991 when Yellow Bengal tiger Sundar and White Bengal tiger Shanti mated, and had two offspring – one white and one yellow.

The excitement at the National Zoological Park in Delhi is muted. Conversations are hushed up and fingers are crossed. A three-year-old white Bengal tigress — who mated with a five-year-old yellow-striped Bengal tiger in May – is pregnant and it means the Delhi Zoo will welcome cubs from inbreeding for the first time in 27 years.

Renamed Nirbhaya by zoo director Renu Singh in April, the tigress is two months pregnant, and due to deliver mid-August. “She has been kept inside her private area in enclosure number 10 because we fear that she might hurt herself outside… She has enough space to roam around and we are keeping an eye on her,” said an enclosure guard, his excitement palpable.

“I don’t want to talk about the future, I will jinx it… sab bhagwaan bharose hai ab (Everything depends on God now).”

For now, Nirbhaya’s diet has changed. In addition to her usual meal of 12 kg of meat, she is also being fed 3 kg chicken, one egg, and one litre of milk daily, said the enclosure guard. Two weeks before she is due to deliver, the guards will begin night vigils as well. 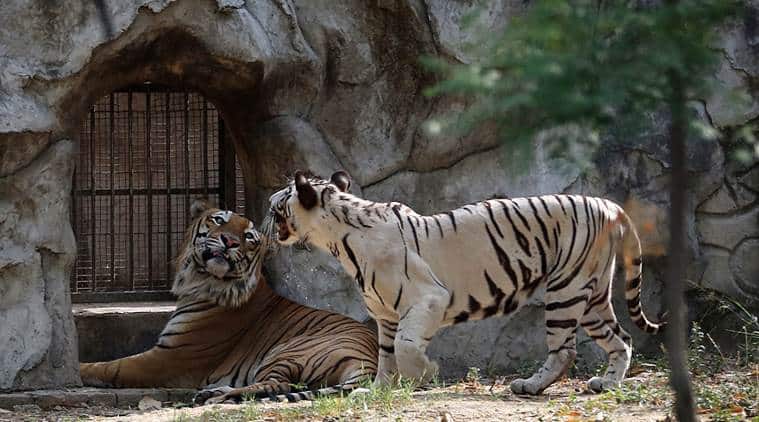 “We have to be there in case there is trouble or any complication closer to the delivery date, so we can inform the veterinarian…we don’t know how many cubs she is carrying but she is doing well,” said an official involved in monitoring the pregnant tigress.

Only after the newborns begin walking, more than a month after their birth, will they be brought into the public eye, said a zoo official.

In May, Singh facilitated this inbreeding when Nirbhaya and Karan, the yellow-striped tiger, were put in the same enclosure. Then, Singh told The Indian Express that the tigers were “introduced to each in a private enclosure.we wanted to see if they have chemistry, will they fight or not. They sniffed each other and seem to get along. We got them married”. The last time such an initiative was taken by the Delhi Zoo was in 1991 when Yellow Bengal tiger Sundar and White Bengal tiger Shanti mated, and had two offspring – one white and one yellow.

A guard at the zoo said, “I’m not posted outside a tiger enclosure but I know that the mating worked and Nirbhaya is pregnant…I have been here for more than a decade but I have never seen mixed tiger cubs…we are all very excited. I will bring my family here when she delivers…I am sure it will attract a lot of crowds too.”

While Nirbhaya was born in 2015 to Kalpana and Vijay (the white tiger who killed a man in 2014), Karan was brought to the Delhi Zoo in 2014 from the Mysore Zoo. Presently, there are seven White Bengal tigers and five yellow-striped Bengal tigers at the Delhi Zoo. The mating has been facilitated to “introduce better genes, better offspring”, said a zoo official.