‘Keeping its financial interests in mind, China wants no enmity with the Nepalese government.’.

Yubaraj Ghimire is a distinguished Kathmandu-based journalist. He worked for leading newspapers in India for many years before returning home to Nepal.

Ghimire, who is known for his outspoken nature and independent mind, has a deep understanding of his country’s politics, society, culture and the strategic importance it holds for its two giant neighbours, India and China.

He has witnessed the Maoist insurgency in Nepal, the end of its monarchy and the radical political change that led to the Hindu-majority Himalayan kingdom transforming into a secular republic in 2008.

Ghimire is currently the editor of Deshsanchar, a journalistic multimedia venture in Nepal.

He discussed Nepal’s current political crisis over the phone with Rediff.com Contributor M I Khan.

The ongoing political development in Nepal has drawn international attention. Do you think it is really a crisis for Nepal, the country, or an internal crisis of the ruling Nepal Communist Party?

This is a political crisis and it began in Nepal on December 15 when our Prime Minister K P Oli recommended the dissolution of the house of representatives, the lower house of parliament. His recommendation was immediately approved by President Bidhya Devi Bhandari.

It was also decided to hold mid-term elections in April-May next year.

This crisis has caused a formal split of the united face of the Nepal Communist Party. Oli is leading one faction and party co-chairman and former prime minister Pushpa Kamal Dahal ‘Prachanda’ is leading the other, which has resulted in an open feud.

Interestingly, both factions are claiming before the election commission that they are the real party.

It is a fact that Oli feared the growing factional feud within the party could lead to his removal as party chief and as prime minister.

If one goes by the numbers, the Prachanda-led faction has more support in the central secretariat, the standing committee and the central committee.

The fact that the Prachanda-led faction enjoys more support than the Oli-led faction is evident because the dissolution took place just before a standing committee meeting that was expected to order a probe into the corruption charges levelled against Oli by Prachanda.

People have taken to streets, agitating against Oli’s move to dissolve the house.

Petitions have been filed in the supreme court challenging his decision. Now, the apex court will have rule. People want the verdict soon. 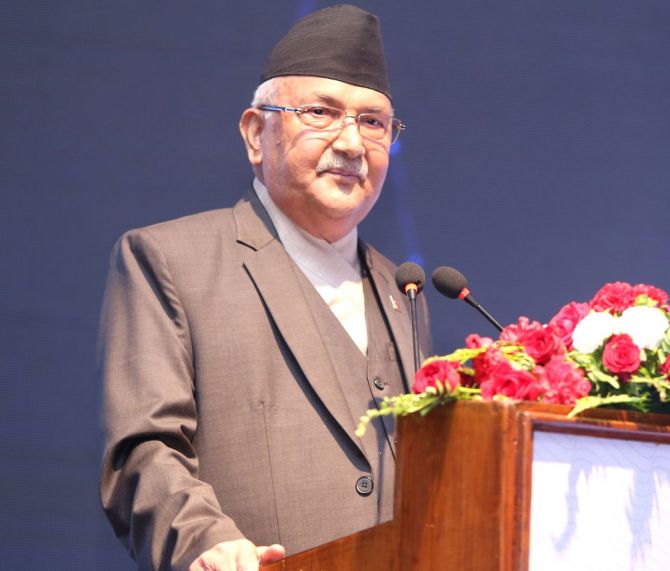 Isn’t it a challenge for Nepal’s relatively new constitution as well?

A debate has definitely started among the people that our five-year-old constitution is facing a test.

People are asking whether our new system (Nepal’s constitution came into effect in 2015) will sustain after this challenge or not.

Besides, there are voices of concern about the constitution’s main features like federalism, secularism and republic.

Questions have already been raised about the relationship between the Centre and the state and about the extent to which the Centre can interfere in a state’s affairs.

In fact, there are many grey areas in constitutional matters.

One thing is certain: People are angry that the government has failed to deliver.

There are different forms of agitations and protests going on against the government.

Why is China interfering in this political crisis? It is Nepal’s internal matter.

This is not something new.

China has been active in Nepal since over a decade. It wants to widen its influence here after India’s crucial role in the 2006 political change in Nepal for which India had even solicited the support of the European Union.

China has come into Nepal in a big way. It has a huge investor presence here and is the largest FDI contributor in Nepal. It has invested in key sectors like construction, energy and tourism. It wants a friendly government to protect its interests and its business.

In recent years, there have been a series of exchange programmes between the governments, and between the ruling communist parties, of Nepal and China.

In a bid to safeguard its interests and have good relations with the government, China has suggested that Oli should hold one post — either that of the head of government or the head of the party — in order to ensure smooth functioning.

Oli did not agree.

China has also tried to prevent a split in the ruling Nepal Communist Party.

Let’s see how the situation emerges in the coming days.

One thing, however, is clear. Keeping its financial interests in mind, China wants no enmity with the Nepalese government. 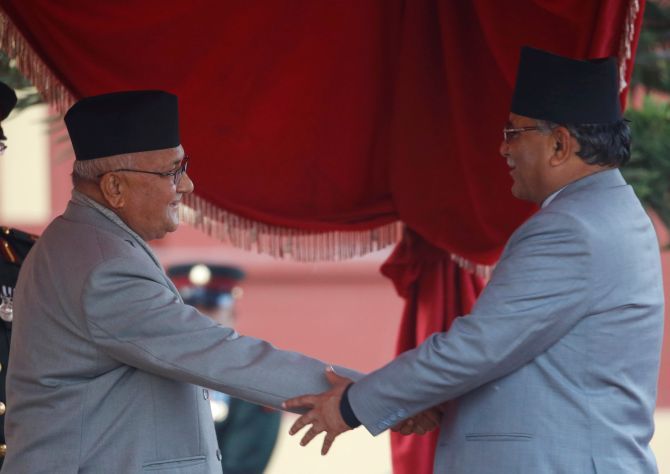 Can India help resolve this crisis?

India has played a role earlier — when it supported the Maoists in order to end the monarchy — but it proved counterproductive as it started interfering in Nepal’s day-to-day politics.

The India-Nepal relation is still relevant, unique and special. To maintain that, India will have to play a positive role.

Both the Opposition parties — the Nepali Congress and the Madhesh-based Janata Samajbadi Party — are seen as pro-India and will hope for an increase of India’s role in Nepal.

In recent years, our experience has been different.

It is a fact that India has pushed Nepal into radical political change.

In 2002, the Maoists were termed as terrorists (by Nepal) but India collaborated with them. Both (India and Nepal) cannot be right; one has to be wrong.

In the process, you (India) have lost all institutional allies in Nepal — the monarchy, the Congress and the Nepal army.

In 2005, India stopped the supply of arms and ammunition to the Nepal army; an act that angered many.

China was a friend in need.

Initially, Narendra Modi was seen as an Indian prime minister with a difference; he was viewed with a lot of hope and the Nepalese expected pro-Nepal policies. But they were disappointed.

In 2015, India imposed an economic blockade for five months and the people realised that Modi is not a politician with a difference. His charm has been lost in Nepal.

BJP leaders had repeatedly said that the UPA neighbourhood policy was wrong. It appears that Nepal is not your priority.

India always takes up the Madhesi issue and backs their movement time and again by citing Roti-beti ka sambandh (a close relationship with the people of Nepal’s plains, also called the Terai region). This has resulted in India losing its credibility and goodwill in Nepal.

India should treat Nepal as an integrated country, as a trusted neighbour.

India supported the anti-constitution Terai movement; that was not in good taste. India’s narrative on the Madhesi is wrong. It has backfired and will backfire whenever it happens again.

Both countries should be proud of the common culture. Nepal should not be seen as an extension of Bihar.

There is no denying the fact that the hill is dominating politics in Nepal.

External forces with vested interests are dividing the Hindu majority in Nepal as ‘hill Hindus’ and ‘plain Hindus’. 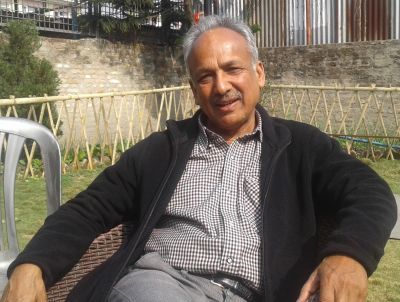 There are reports of protest by a section of people, widely seen as pro-monarchy, demanding the restoration of the Hindu kingdom in Nepal.

Movements have been going on for the last five/six weeks in different parts of Nepal demanding the return of the monarchy and the restoration of the Hindu kingdom in Nepal.

They have a visible presence on the streets.

Some people have expressed fear that the ongoing protest by different groups may take a violent turn in Nepal in 2021.

It might take the shape of political violence in Nepal; this was a reality till over a decade ago for gaining legitimacy to rule.

There is a chance that it might happen again if the situation goes out of control on the streets.

It all depends on how the supreme court gives the judgment and to what extent the street protests continue.

It is important to note the evolving role of the powerful Nepal Communist Party faction led by Prachanda and Madhav Nepal. Only the future will tell how effective they will be.

When you see this political crisis ending? Will it continue or deepen further?

There is no immediate solution in sight as politics is being fought in the streets and in the supreme court.

There is little chance of any immediate solution as Oli has been facing challenges; he will try to rule till the polls next year as head of the caretaker government. Oli has a president who favours him.