Sources said that the BJP, which saw a reduced seat share in the recent Ladakh Autonomous Hill Development Council elections, will find it difficult to face a united Opposition in J&K. 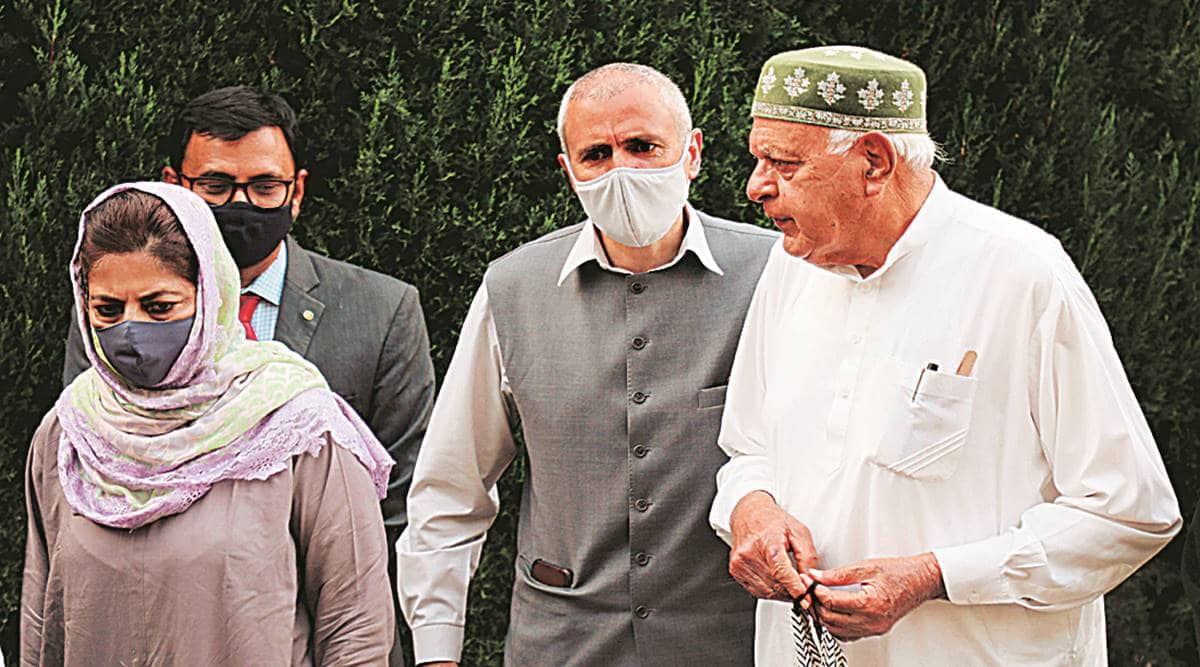 Ahead of the first District Development Council (DDC) elections in Jammu and Kashmir, Union Home Minister Amit Shah on Tuesday called the People’s Alliance for Gupkar Declaration (PAGD) the “Gupkar Gang”, and said it, along with the Congress, wanted to “take J&K back to the era of terror and turmoil”. Calling it an “unholy global gathbandhan”, Shah said the PAGD wanted “foreign forces to intervene in J&K”.

Former Chief Ministers Mehbooba Mufti and Omar Abdullah, whose parties are part of the PAGD, reacted sharply to Shah’s remarks. Both linked Shah’s attack to the DDC elections beginning November 28 – the first political exercise since the Centre revoked J&K’s special status under Article 370 on August 5 last year – and the PAGD’s decision to put up a “united front”.

In a series of tweets, Shah said: “The Gupkar Gang is going global! They want foreign forces to intervene in Jammu and Kashmir. The Gupkar Gang also insults India’s Tricolour. Do Sonia Ji and Rahul Ji support such moves of the Gupkar Gang? They should make their stand crystal clear to the people of India.”

“Congress and the Gupkar Gang want to take J&K back to the era of terror and turmoil. They want to take away rights of Dalits, women and tribals that we have ensured by removing Article 370. This is why they’re being rejected by the people everywhere,” he said.

“Jammu and Kashmir has been, is and will always remain an integral part of India. Indian people will no longer tolerate an unholy ‘global gathbandhan’ against our national interest. Either the Gupkar Gang swims along with the national mood or else the people will sink it,” he said.

The PAGD, a coalition of seven parties including the National Conference (NC), Peoples Democratic Party (PDP), Jammu and Kashmir People’s Conference and CPI(M) formed last month, is fighting the DDC polls together. Last week, the Congress joined the deliberations on seat-sharing within the alliance.

Sources said that the BJP, which saw a reduced seat share in the recent Ladakh Autonomous Hill Development Council elections, will find it difficult to face a united Opposition in J&K.

According to sources, the BJP, which held two press conferences on Monday on the same issue, is keen to see the consolidation of its support base in J&K. Repeated statements on Article 370 are being made for this purpose, said a party source.

“Fighting elections in an alliance is also anti-national now. BJP can stitch as many alliances in its hunger for power but somehow we are undermining national interest by putting up a united front,” she said.

“I can understand the frustration behind this attack by the Hon’ble Home Minister. He had been briefed that the People’s Alliance was preparing to boycott elections. This would have allowed the BJP & newly formed King’s party a free run in J&K. We didn’t oblige them,” Omar tweeted.

“Only in J&K can leaders be detained & called anti-national for participating in elections & supporting the democratic process. The truth is all those who oppose the ideology of the BJP are labelled ‘corrupt & anti-national’,” he said.

“We are not a ‘gang’ Amit Shah ji, we are a legitimate political alliance having fought & continuing to fight elections, much to your disappointment,” Omar said.

“Participating in democratic process may be a job of ‘gangs’ for BJP, but for us it is sacred. The consensus & unity of political parties in J&K has unnerved the BJP. We will fight for the restoration of constitutional rights, irrespective of what the authoritarian regime calls us,” CPI(M) leader M Y Tarigami said.

Shah’s attack came a day after Union Minister Ravi Shankar Prasad questioned the Congress’s decision to contest the DDC polls with the PAGD. Addressing a press conference on Monday, Prasad said: “Farooq Abdullah has no compunction in seeking the support of China for the restoration of Article 370… Mehbooba Mufti said she won’t hoist the Tricolour unless the J&K flag is restored”. He asked if Sonia Gandhi and Rahul Gandhi supported their remarks.

The DDC elections will be held in eight phases, from November 28 to December 19, and the counting has been scheduled for December 22.

The DDCs will comprise elected representatives from 14 territorial constituencies to be identified in each district. With the Halqa Panchayat as the basic unit, the district’s yearly and five-yearly development plans will be finalised by a three-tier system of Gram Panchayats, Block Development Councils and the DDCs.