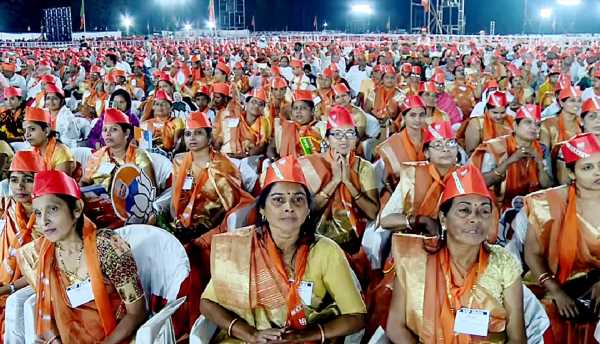 Diamond workers of Surat could make a difference to the election outcome in at least half a dozen seats of Gujarat where they have a numerically significant presence, political experts say.

There are around 15 lakh diamond workers in Gujarat, including nearly seven lakh employed in units in Surat, which is the largest hub of cutting and polishing of these precious stones.

The remaining workers are employed in units located in Bhavnagar, Rajkot, Amreli, Junagadh and a few other northern districts of the state, as per industry sources.

Representatives of the diamond workers in Surat have already appealed to the ruling Bharatiya Janata Party, the opposition Congress and the new entrant Aam Aadmi Party to raise their concerns about the Rs 200 professional tax being collected from them by the local civic body and demand for the implementation of labour laws in the diamond industry.

These voters played an important role in helping the Arvind Kejriwal-led AAP win 27 out of the total 120 seats in the Surat Municipal Corporation elections in 2021, and could impact the party’s prospects in the Gujarat assembly elections to be held on December 1 and 5, experts say.

Nearly seven lakh workers, also known as ratna kalakars, are engaged in cutting and polishing rough diamonds in Surat city, with majority of them sharing a common connection as they hail from the state’s Saurashtra region and belong to the Patidar community, political analyst Dilip Gohil told PTI.

Even workers belonging to non-Patidar communities from Saurashtra are settled in Surat and share a common bond with them, he said.

“They know each other well and are interconnected…It is easy for the diamond workers to mobilise support for a particular political party. Owners of the diamond cutting and polishing units, who have traditionally supported the BJP, also influence the decision of their workers about which party to support,” Gohil said.

The outcome in Varachha Road, Katargam, Karanj, Kamrej, and Surat (North) assembly seats in Surat is impacted by people from Saurashtra settled there and engaged in the diamond cutting and polishing industry as well as embroidery and other related jobs, he added.

Last year, the AAP had won 27 civic seats in areas falling under these Assembly segments mainly because of the support of the Patidar community and a large section of diamond workers, Gohil said.

The AAP clearly considers these among its safest seats in Gujarat as it has fielded its state chief Gopal Italia from Katargam and general secretary Majoj Sorathiya from Karanj, he said.

The BJP, which had won all these seats in the 2017 assembly polls, is playing safe as it has given tickets to its sitting MLAs in four of these five seats, except Kamrej seat where it has fielded Praful Panseria.

Talking to PTI, diamond industrialist and Gems and Jewellery Export Promotion Council regional chairman Dinesh Navadiya, who was keen on contesting in Varachha Road from the BJP but was not given the ticket, claimed the AAP’s prospects of winning these seats are not as bright as they appear.

“The AAP is not likely to leave any impact in the election. Diamond unit owners will continue their support to the BJP. In the corporation election, the AAP won in seats held by the Congress, and the BJP was not much impacted. When we look at the vote share, nothing new happened, only the party changed,” he said.

Surat Diamond Workers Union vice president Bhavesh Tank said they have requested the BJP, Congress and AAP to raise and address their issues regarding the professional tax being collected by the Surat civic body and the implementation of labour laws in the diamond industry.

“The Surat Municipal Corporation collects Rs 36 crore from diamond workers in the form of professional tax every month. We have been requesting the government to remove this since the time it was introduced five years ago. But our exploitation continues with the collusion of the industrialists and government,” he claimed.

People say the AAP dominates in Surat, but the party is not working on the ground, he said.

“Despite being in opposition, the AAP has failed to raise the issues affecting the diamond workers like collection of professional tax,” he said.

Another issue is that labour laws are not being followed in the diamond industry and workers are being deprived of the benefits, Tank claimed, adding the government never comes up with a proper planning and package for the diamond workers in the budget.

“The AAP has also not made a representation before the BJP government for the implementation of labour laws in the diamond industry and compensation to diamond workers who commit suicide,” he said.

“We requested the AAP to raise the issue at the local level because it is now the main opposition in the civic body, but it has also not done anything in this regard. The Congress had raised our issue of professional tax in the Assembly,” he said.

There are nearly seven lakh workers engaged in around 5,000 diamond cutting and polishing units in Surat. Out of these 5,000 units, only 300 have licence under the state’s Factories Act, Tank said.

“It becomes difficult to ascertain the exact number of workers in the absence of the Factories Act. Workers are even deprived of the benefits like bonus and leaves. We had written to the chief minister and cases were registered against 16 companies,” he said.

The diamond workers of Surat also impact the poll outcome to some extent in their home districts in Saurashtra and generally toe the line of their unit owners as far as voting in the elections is concerned, said exporter Nilesh Bodki, who founded the NGP Diamond Industry Career Foundation.

A large number of them who are not permanently settled in Surat are taken by supporters of various political parties, or go on their own, to their home districts in buses a day before the polling to cast their votes, he said.