Seeking daily wages in Patna, from as far as 100 km away, many say CM did work, but ‘time for a change’. 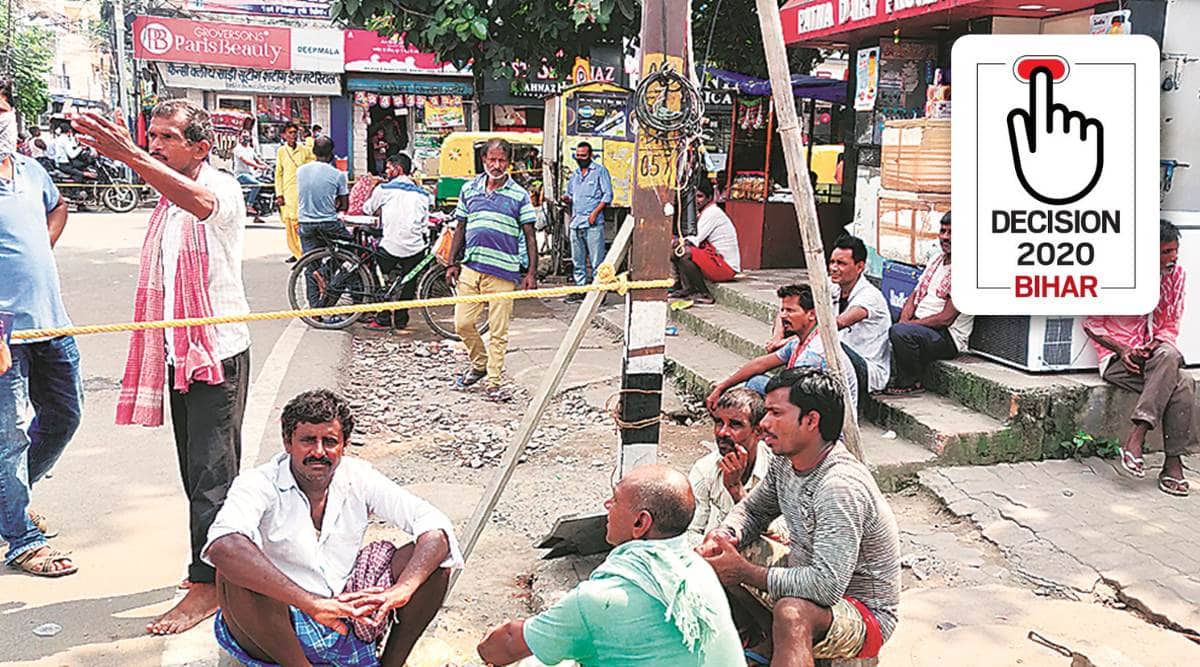 The sun has now ascended into the sky, and hope is fading fast. By 5 am, every day, about 150 daily wage workers assemble at Boring Canal Road in Patna, waiting to be picked up for work. At 10.30 am on a Tuesday, the area is still packed. Only 10 men have found work so far. The remaining squat on the ground in groups, their tools next to them. Such scenes have become common since the lockdown, say the workers, even as their savings have dried up, making survival tough.

As Bihar prepares to vote in the midst of a pandemic, the plight of labourers, many of whom have returned from metros in the past six months, is an important election issue.

Next to where the men sit, the Boring Canal Road, and indeed Patna, seems to have returned to ‘normalcy’, with chaotic roads, open markets, and people roaming without masks. But these men ask “what is normal?” “There is absolutely no work. Most of us are mistri (masons) or rajmistri (supervisors), and depend on the real estate sector for work, earning between Rs 600-700 a day. Now, even if we get work, payment is not guaranteed,” said Raghu Gupta, a worker at the chowk.

The group also alleges “gadbad” in government schemes. Says Kashinath, “This always happens to the poor. Some have ration cards, others don’t. Some get government relief, others have their names incorrectly spelled in government records, and miss out.”

With little work in their villages, many of the intra-state migrants at the chowk have come from Masaurhi, Lakhisarai, and even Darbhanga, over 100 km away. As the conversation drifts towards elections, a majority of the labourers say they voted for Nitish Kumar in 2015. Some add that he is still the best option for the state. “Nitish ne kaam toh kiya hai (CM Nitish Kumar has worked for the state). Take prohibition. Earlier, we would spend the money we earned on alcohol. Now we use it to help our families,” Kashinath said. Soon, an old labourer counters him, “Who says there is prohibition? Alcohol is just expensive now.”

The workers here are also unsure if they will vote in the elections. “Travel back home costs Rs 600. When you are earning only five days in a month, there is simply no money. Our room rent in Patna is Rs 3,000 per month; Rs 4,000 if it has a kitchen. None of us can afford to go back,” Kashinath said.

Three km away, under the Sipara Railway Bridge, another spot where daily wagers assemble to find work, Rahul Kumar says earlier he worked at an export textile company in Mumbai for a monthly salary of Rs 20,000. He was among thousands of migrant workers who walked home (Jehanabad) in March-April, hitching rides. It took him 13 days.

His eyes well up as he talks about the struggles of the past months. “The government is the head of family. People died walking home. Does anyone hurt their own family in this manner? Jeete ji maar hi diya,” said Kumar.