Most exit polls predicted RJD to again emerge as the single largest party in the 243-member assembly along with a clear dip in the seat tally of Bihar chief minister Nitish Kumar-led JD(U). 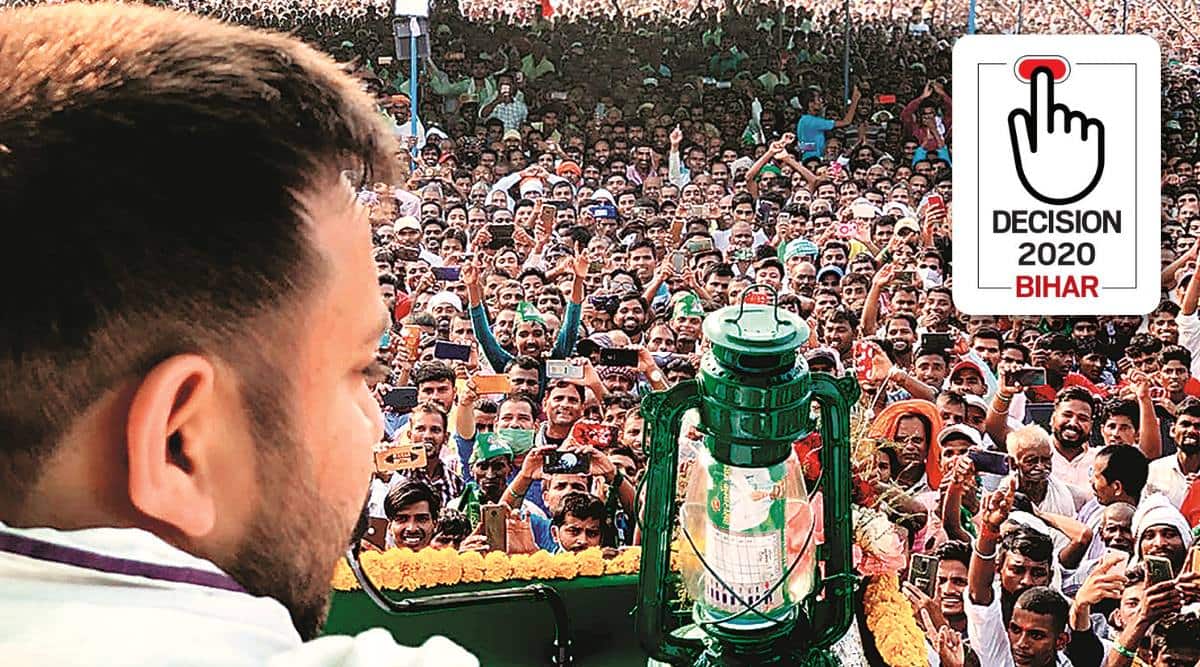 Most exit polls for the Assembly elections in Bihar, which saw nearly 58 per cent voter turnout in the third and final phase on Saturday, have given the RJD-led Mahagathbandhan (Grand Alliance) an edge over the ruling BJP-led NDA, in which Chief Minister Nitish Kumar’s JD(U) is a constituent.

Chirag Paswan-led LJP, which pulled out of NDA after targeting CM Kumar, is likely to put up a poor show with most of the exit polls predicting single-digit figures for the party.

While two exit polls have projected an emphatic victory for the Grand Alliance, three pollsters have predicted a tight contest between the RJD-led alliance and NDA. According to CNN News 18-Today’s Chanakya exit polls, the Grand Alliance is set to sweep the elections with winning 180 seats, which is well above the majority mark of 122 in the 243-member Bihar Assembly. NDA, meanwhile, is expected to get 55 seats while LJP is projected to draw a blank, according to this exit poll.

Exit polls conducted by India Today-Axis My India too have projected the Grand Alliance as the clear winner with its number of seats varying between 139 and 161. The NDA is expected to get 69-91 seats whereas LJP and others are projected to get only 3-5 seats, as per this pollster.

According to Times Now-CVoter exit poll, the BJP-led NDA is expected to win 116 seats while the Grand Alliance is projected to bag 120. The Republic TV-Jan ki Baat exit polls, on the other hand, projected a possible win for the Grand Alliance, giving it 118-138 seats against NDA’s 91-117 seats. It has predicted only 5-8 seats for LJP.

ABP News CVoter, meanwhile, projected a tight contest between the two alliance. While it predicted 108-131 seats for the Grand Alliance, it expects NDA to bag between 104-128 seats. LJP is also expected to get between 1-3 seats.

Dainik Bhaskar, however, predicted NDA to have an advantage over the RJD-alliance, winning seats between 120-127 against the latter’s 71-81 score. It placed LJP in a slightly better position with 12-13 seats while expecting others to secure wins in 19-27 constituencies.

Although most exit polls have predicted an advantage for Mahagathbandhan and its chief ministerial face Tejashwi Yadav, 2015 Bihar Election results had proved exit poll predictions can be far from the ground score. Last assembly elections, the Mahagathbandhan, of which JD(U) was a part then along with the RJD and the Congress, wronged most of the exit polls only to be declared the winner.